Posted on February 8, 2019 by Regina Jeffers 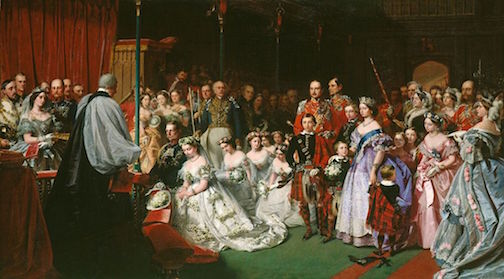 Wikipedia ~ the marriage of Victoria and Fredrick

Previously, we spoke of the marriage of Victoria, Princess Royal, to Prince Frederick of Prussia, later Frederick III, German Emperor and King of Prussia. View that article HERE. The princess was only 17 when she married “Fritz,” and she was most certain Queen Victoria’s daughter. Her mother’s influence spelled doom from the beginning for the young princess. From Unofficial Royalty, we learn, ‘It was, and still is, customary for the wedding to be in the bride’s home territory, but Vicky was marrying a future monarch and the wedding was therefore expected to be in Berlin.  However, Queen Victoria had other ideas: “The assumption of it being too much for a Prince Royal of Prussia to come over to marry the Princess Royal of Great Britain in England is too absurd, to say the least…Whatever may be the usual practice of Prussian Princes, it is not every day that one marries the eldest daughter of the Queen of England.  The question must therefore be considered as settled and closed…’  Queen Victoria got her way and the wedding was scheduled for Monday, January 25, 1858, in the Chapel Royal of St. James’ Palace in London, England, where the bride’s parents had been married.”

The problems between Frederick and Vicky rested in her inability to assimilate to her new home. She still thought of herself as “English” and superior to her husband’s family and people. Vicky filled long letters to her mother where she described the ignorance of those in the Prussian court. Though her estimations were likely “astute” in many ways, her impetuous judgments caused Princess Victoria to lose the support of those she required, while she foolish made intimates of those who did not hold her best interest to heart. The princess wished to please her mother, and so she listened to Queen Victoria’s rebukes to operate in a Prussian court as if she were still in an English one. In justice to Vicky, the princess had spent a lifetime attempting to please a difficult and exacting mother. At such a young age she could not be expected to break the ties that bound her to the British Queen.

Vicky became pregnant shortly after her marriage. This did not please her mother who thought the pair should have waited before becoming with child. Queen Victoria expressed her “disappointment” to Fritz, saying “you men are far too selfish!”

For her 18th birthday, Vicky and Fritz moved into the newly refurbished Crown Prince’s Palace, where they escaped the “drab weariness” of the Royal Palace. The pair also, with the permission of Fritz’s father, Wilhelm I, took possession of the 200-rooms and three storied mansion known as Neues Palais. It was to become their true “home” throughout their marriage. Princess Victoria spent many years making Neues Palais a showplace.

With the approach of the princess’s baby, Queen Victoria further opened wounds, in her daughter’s name, that were never healed. The Queen demanded that her daughter be attended by those who had attended the Queen during her later pregnancies. She sent her personal physician, Doctor James Clark, and a midwife, Mrs. Innocent, to tend the princess. Clark brought with him a bottle of chloroform, an accepted anesthetic in British childbirths, but not in Prussian ones.

On 26 January 1859, the princess went into hard labor. Doctor Wegner, the German physician attending her, sent for a colleague, Doctor Edward Martin. By this time, Princess Victoria had been in labor eleven hours. Martin’s examination of her showed the baby in a breech position. If the child could not be turned, forceps would be used to pull it out. Some within the court privately sent an announcement of the demise of the princess and the child to the German press.

Over Wegner’s objections, Martin requested that Clark administer the chloroform to the princess. Martin then manipulated the baby into a proper position. In Victoria’s Daughters by Jerrold M. Packard (St. Martin’s, 1998, page 74), we learn, “At 2:45 on the afternoon of the 27th – nearly fifteen hours into labor – the baby started to emerge. First its rear end appeared, and then the legs, which had been folded up against its stomach and chest. Following another dose of chloroform, the doctor surgically stretched Vicky’s uterus, after which the baby finished descending through with its left arm folded up behind its head. During the enormously difficult birth, the considerable force used to pull this arm free severely damaged the limb – whether from the application of forceps is unclear. The newborn baby did not immediately seem to be breathing. What is very likely, and would go far in explaining the future personality of the infant, was that long moments – perhaps some minutes – were passed until its first breath was taken, with some brain damage plausibly the result of the delay. The attendants rubbed the baby, possibly causing yet further unintentional damage to the already injured arm; the doctors evidently believed that a perfect baby had been born despite the horrifying circumstances of the delivery, and the severity of the injury to the limb was no even realized until three days later.”

The child Wilhelm or “Willy” would spend a lifetime suffering first one medical experiment and gadget meant to FIX his deformed hand and shorter arm. Obviously, Princess Victoria was appalled to know she brought a less than perfect child into the world. Despite Willy’s disabilities, she was determined to mold her son into the future King of Prussia, a course that would destroy their relationship.