“Mirror, Mirror on the Wall” – The Employment of Filmic Devices to Tell a Story in Austen Adaptations

Often in the visual representations of Jane Austen’s works, the media employs props or artifacts as visual cues to Austen’s themes of flawed impressions, misconceptions, and false interpretations. For example, in Austen’s Emma, Harriet’s sketch serves as a means to reveal how the other characters feel about Emma’s friend. Mr. Elton flatters Emma’s representation of her subject rather than remark on Harriet. Mr. Woodhouse’s sensibility and his need for fires in all the hearths shows through when he says Harriet has been subjected to the elements when she is portrayed without a shawl. Even Mr. Knightley gives the viewer a clue to how he feels about Emma’s efforts to raise Harriet up in Society. Upon observing the sketch, he says Emma has made Harriet “too tall.”

The resetting of the miniature of Captain Benwick in Persuasion serves as a the perfect symbol for Captain Harville’s and Anne’s “debate” over the constancy of females and males in love. In Mansfield Park, the distorted and mistaken impressions of the characters plays out in theatricals. Edward Ferrars’ ring is a prime example. In Sense and Sensibility, Elinor Dashwood mistakenly believes it is a lock of her hair encased within. In truth, the lock belongs to Lucy Steele.

These “mistaken interpretations” and many more of Austen’s subtle thematic layers appear in the film versions of Austen’s works in the form of a mirror. It is a bit of irony that Austen never uses the prop as part of her story lines (except in the case of Sir Walter Elliot in Persuasion). Yet, Hollywood loves a good prop, and a mirror can tell the viewer so many unspoken tales. The mirror is often used in film to double a shot’s space or to display a character’s feelings or even to take on metaphorical dimensions. Film history gives up multiple examples of the use of the mirror as important role (Orson Welles’s 1948 The Lady from Shanghai; Walt Disney’s 1939 Snow White, etc.).

A mirror in its stillness reflects a “fundamental absence,” as Christian Metz terms the prop’s use. It is a reflection within a reflection. Ariane Hudelet says in “Deciphering Appearances in Jane Austen’s Novels and Films” that “To look at a heroine looking at herself transforms the character into a self-spectacle, a motif we could link with the emphasis on interiority in Austen’s novels. The mirror objects can thus stand for conflicting notions of blindness or introspection, vanity or revelation, according to the films and sequences. Whether it is used as a symbol to reflect the characters’ thoughts or nature, or as a metaphor of the relationships between the characters which can sometimes contrast with the contents of the dialogue and reveal ironic distance, the mirror image constitutes a privileged example of the way Austen’s very modern questioning of the perception of reality can become a post-modern questioning of the reception and distortion of images.” 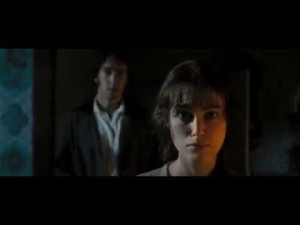 So, when we as viewers encounter a filmic scene in which the director has used a mirror, we immediately translate the prop’s use to represent introspection on the part of the character. Or we may immediately interpret the character’s self-absorption. Or we may recognize the illusory blindness of the character. In Joe Wright’s 2005 adaptation of Pride and Prejudice, the scene where Elizabeth Bennet “reflects” on Mr. Darcy’s letter is a very poignant one in the film. She discovers her own misconstructions. Those are summarized by Elizabeth’s response to Charlotte Lucas’s inquiry to her mindset. “I hardly know.”

Wright’s film relies on stillness to create the conflict. Following the proposal scene in the pouring rain, the viewer follows Elizabeth’s slow progression through Hunsford cottage to stand before the mirror. We, the viewers, are on the inside of the mirror, looking back at Elizabeth’s inner journey. The scene begins with Elizabeth sitting on her bed. This is what is known as a medium close shot. She does not move. It is a back lit shot to create a claire-obscure effect. Elizabeth moves along a narrow corridor to stand before the mirror. In his commentary on the DVD, Joe Wright says, “We are her,” in referring to the viewing audience becoming Elizabeth’s reflection.

Time progresses behind Elizabeth, but she remains still and expressionless. Darcy appears behind her to deliver his letter. Images are purposely blurred to tell the viewer that these characters have often misconstrued the other.

Elizabeth is learning about Mr. Darcy but also about herself. Her “vision” is both blurred and clear. She turns around to find what she now sees clearly as having disappeared. When she can finally recognize Darcy for the man he is, he is no longer available. Wright uses the mirror as an image of revelation. In the novel, Elizabeth looks long and hard at an image of Darcy in the Pemberley gallery. She recognizes the man she should have seen from the beginning.

Now, it is your turn. Tell me other instances of when the mirror is used as a prop in an Austen adaptation. I, personally, can think of several others, but I’ll leave it to you to list some before I pour forth others. We can even explore the use of the mirror in other modern films if you like.