Hanging a Monkey as a French Spy During the Napoleonic Wars

What do you know of the Hartlepool Monkey and the “Monkey Hangers”? I certainly knew nothing of the tale until I stumbled across it. 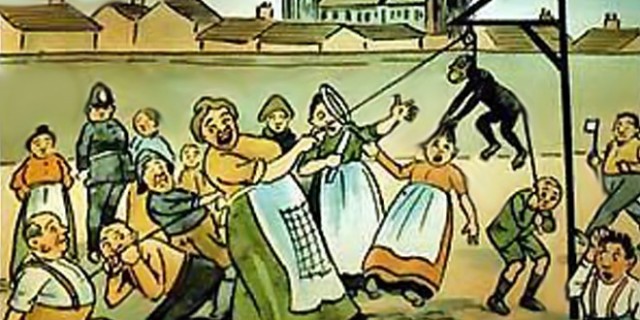 Legend says that a shipwrecked monkey was hanged as a French spy during the Napoleonic Wars by the people of Hartlepool, a town in County Durham, England, and the moniker of “monkey hangers” has stuck to this day.

This is Hartlepool tells us, “During the Napoleonic Wars there was a fear of a French invasion of Britain and much public concern about the possibility of French infiltrators and spies. The fishermen of Hartlepool fearing an invasion kept a close watch on the French vessel as it struggled against the storm but when the vessel was severely battered and sunk they turned their attention to the wreckage washed ashore. Among the wreckage lay one wet and sorrowful looking survivor, the ship’s pet monkey dressed to amuse in a military style uniform.

“The fishermen apparently questioned the monkey and held a beach-based trial. Unfamiliar with what a Frenchman looked like they came to the conclusion that this monkey was a French spy and should be sentenced to death. The unfortunate creature was to die by hanging, with the mast of a fishing boat (a coble) providing a convenient gallows.”

One assumption is that satirical cartoons of the time had something to do with why the locals thought a Frenchman and a monkey as synonymous. Those cartoons often pictured the French as monkey-like creatures with tails and claws, so perhaps the locals could be forgiven for deciding that the monkey, in its uniform, must be a Frenchman, and a French spy at that.

So is the legend true? Did the good folk of Hartlepool REALLY hang a poor defenseless monkey?

Historic UK says: “There could perhaps be a darker side to the tale – maybe they didn’t actually hang a ‘monkey’ but a small boy or ‘powder-monkey’. Small boys were employed on warships of this time to prime the canons with gunpowder and were known as ‘powder-monkeys’.”

Taunts still follow some of the residents of Hartlepool today, especially at football matches between local rivals Darlington and Hartlepool United the chant, “Who hung the monkey” can often be heard. Most Hartlepudlians however love this story. Hartlepool United’s mascot is a monkey called H’Angus the Monkey, and the local Rugby Union team Hartlepool Rovers are known as the Monkeyhangers.

The successful mayoral candidate in the 2002 local elections, Stuart Drummond, campaigned dressed in the costume of H’Angus the Monkey, using the election slogan “free bananas for schoolchildren”, a promise he was unfortunately unable to keep. However this appears not to have dented his popularity, as he went on to be re-elected two more times.

In June 2005 a large bone was found washed ashore on Hartlepool beach by a local resident, which initially was taken as giving credence to the monkey legend. Analysis revealed the bone to be that of a red deer which had died 6,000 years ago. The bone is now in the collections of Hartlepool Museum Service. (This Is Hartlepool)

Whatever the truth, the legend of Hartlepool and the hanged monkey has endured for over 200 years. 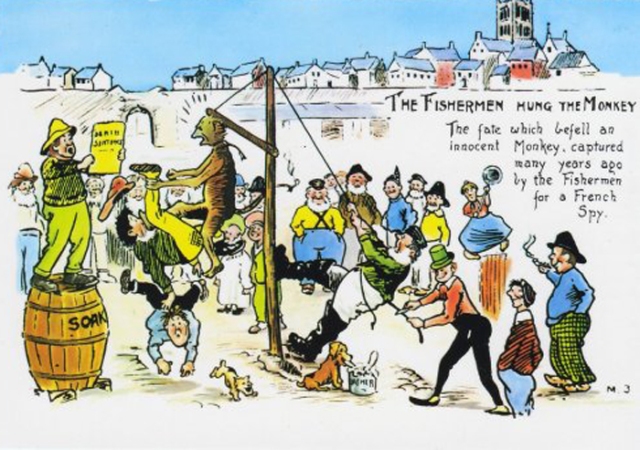 In former times, when war and strife

An’ all was armed to the knife

The Fisherman hung the monkey O !

The Fishermen with courage high,

Siezed on the monkey for a French spy;

They did and they hung the monkey Oh!

They tried every means to make him speak

And tortured the monkey till loud he did speak;

For the fishermen had got druncky oh!

Hammer his ribs, the thunnerin thief

Thus to the Monkey all hands behaved

Another bawled out “He’s never been shaved”,

So commenced to scrape the Monkey, O!

They put him on a gridiron hot,

The Monkey then quite lively got,

He rowl’d his eyes tiv a’ the lot,

Then a Fisherman up te Monkey goes,

Saying “Hang him at yence, an’ end his woes,”

But the Monkey flew at him and bit off his nose,

An’ that raised the poor man’s Monkey O!

An’ all was armed to the knife,

The Fishermen hung the Monkey O!

Seized on the Monkey for a spy,

They did, and they hung the Monkey O!. They tortor’d the Monkey till loud he did
squeak

For the Fishermen had got drunky, O!

Wiv a cod’s head then they closed an eye,

Afore they hung the Monkey O!.

Here the Song on You Tube