What do you know of  Yorkshire’s legendary hero, “Blind Jack (John Metcalf)”?

JOHN METCALF was born at Knaresborough, on the 15 August, 1717 in a thatched cottage opposite Knaresborough Castle. Metcalf was considered a a pioneer in road construction. Between 1765 to 1792, Metcalf designed and helped build 180 miles (290 km) of turnpike road mainly in and around Yorkshire, Lancashire and Derbyshire. Many of his routes still survive today, for example as parts of the A59 and the A61. This was made even more remarkable by the fact that Metcalf was blind. 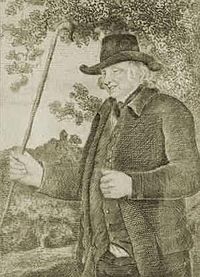 An attack of smallpox left Metcalf permanently blind when he was six years old, but this did not seem to hamper the boy. It is said that after three years of blindness, Jack could find his way to any part of Knaresborough. He became an excellent rider and learned to place an instrument. Stories even tell of how Jack rushed into the River Nidd to rescue a soldier who was drowning, unable to swim due to a sudden bout of cramp. It took Jack four attempts, but eventually the soldier was saved.

At 15, Jack became the in-house fiddler at the Queen’s Head in Harrogate, replacing a 70-year-old fiddler who had apparently come to play the fiddle ‘too slow for country dancing’. Metcalf also became a guide to visitors in the local area, sometimes finding that the only way to receive custom from tourists was to conceal his blindness. In his youth, Metcalf also eloped with Dolly Benson, the daughter of the landlord of the Royal Oak in Knaresborough.

According to Historic UK, Jack joined the ‘Yorkshire Blues’ in 1764. This was a 64-man militia raised in the district by Captain Thornton to fight Bonnie Prince Charlie and the Jacobites. The militia’s uniforms were dark blue with gold lace, providing their name. At the Battle of Falkirk, Jack evaded capture and was present at the Battle of Culloden, which saw the decisive defeat of the Jacobite rising by the Duke of Cumberland.

By 1752, Jack was operating a stagecoach company between York and Knaresborough, exposing him to the appalling condition of local roads. Soon after a new Turnpike Act in 1752, seizing the opportunity to make some money,  Metcalf obtained a contract for building a three-miles’ stretch of road between Ferrensby and Minskip. 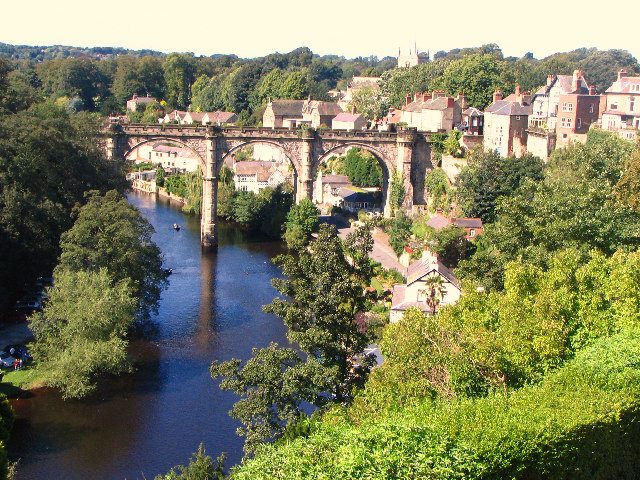 Metcalf became famous as a builder of roads and bridges, using techniques that in the 18th Century were revolutionary. According to Ancestry.com, he “built roads on the Plain of York, as well as over the much more difficult terrain of the Pennines. His greatest speciality was in laying them across marshy ground, a problem no-one previously had solved. His only instrument was a stout staff. His method for laying foundations was to order his men to pull and bind heather in round bundles and to lay it on the intended road in rows, piling more bundles on top and pressing them down into the bog to soak up the water. He then brought carts loaded with stone and gravel to lay above the bundles of heather [and whin (types of heather and gorse, respectively)]. Living at a time when turnpike roads were being built all over Britain, he was responsible for around 180 miles of road in Yorkshire, Lancashire, Derbyshire and Cheshire, including the roads from Harrogate to Boroughbridge, Wakefield to Dewsbury and Doncaster, Knaresborough to Wetherby and Huddersfield to Halifax.” He advanced a viable mode of building upon marshland by using a combination of ling and whin (types of heather and gorse, respectively). Building a road from Harrogate to Knaresborough, Metcalf encountered a bog, and some saw the task as impossible. Nevertheless, Metcalf built across the bog and received the tidy sum of four hundred pounds for his work.

“Itching to do new things even in old age, Metcalf walked all the way from Spofforth to York to dictate his life story to a publisher, who printed the biography in 1795. E. & R. Pick’s The Life of John Metcalf, Commonly Called Blind Jack of Knaresborough also describes Jack’s exploits in hunting, card-playing, cock-fighting, bridge construction and ‘other undertakings’. Upon death, Blind Jack left behind 4 daughters, 20 grandchildren and a phenomenal 90 great and great-great grandchildren.” (Historic UK)

His headstone, erected in the churchyard of All Saints Church, Spofforth, at the cost of Lord Dundas, bears this epitaph:

“Here lies John Metcalf, one whose infant sight
Felt the dark pressure of an endless night;
Yet such the fervour of his dauntless mind,
His limbs full strung, his spirits unconfined,
That, long ere yet life’s bolder years began,
The sightless efforts mark’d th’ aspiring man;
Nor mark’d in vain—high deeds his manhood dared,
And commerce, travel, both his ardour shared.
’Twas his a guide’s unerring aid to lend—
O’er trackless wastes to bid new roads extend;
And, when rebellion reared her giant size,
’Twas his to burn with patriot enterprise;
For parting wife and babes, one pang to feel,
Then welcome danger for his country’s weal.
Reader, like him, exert thy utmost talent given!
Reader, like him, adore the bounteous hand of Heaven. 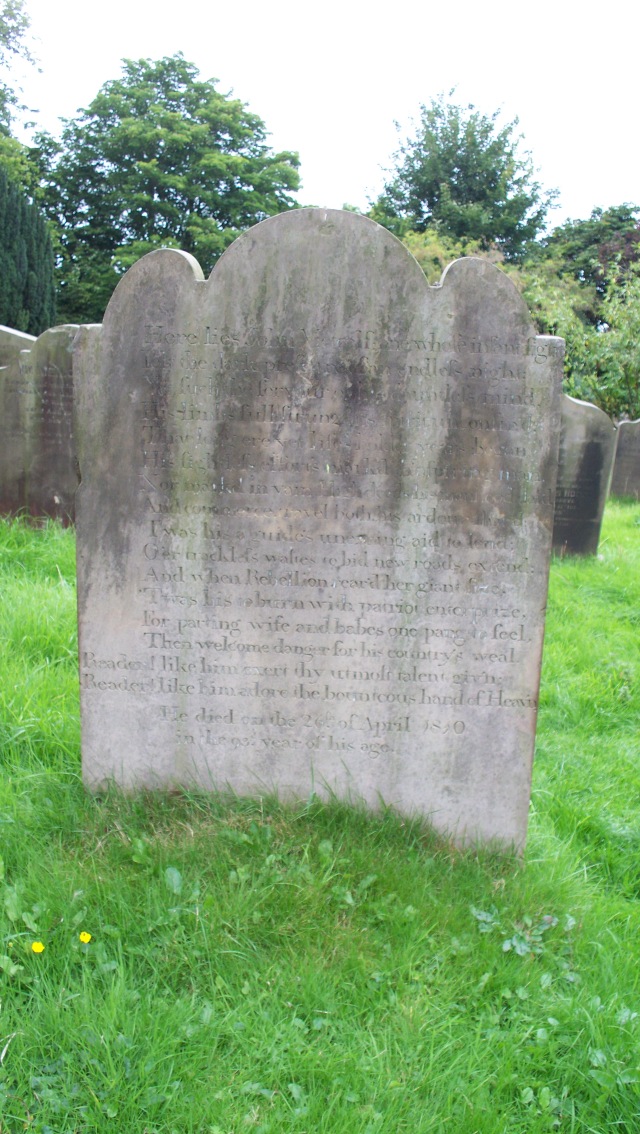 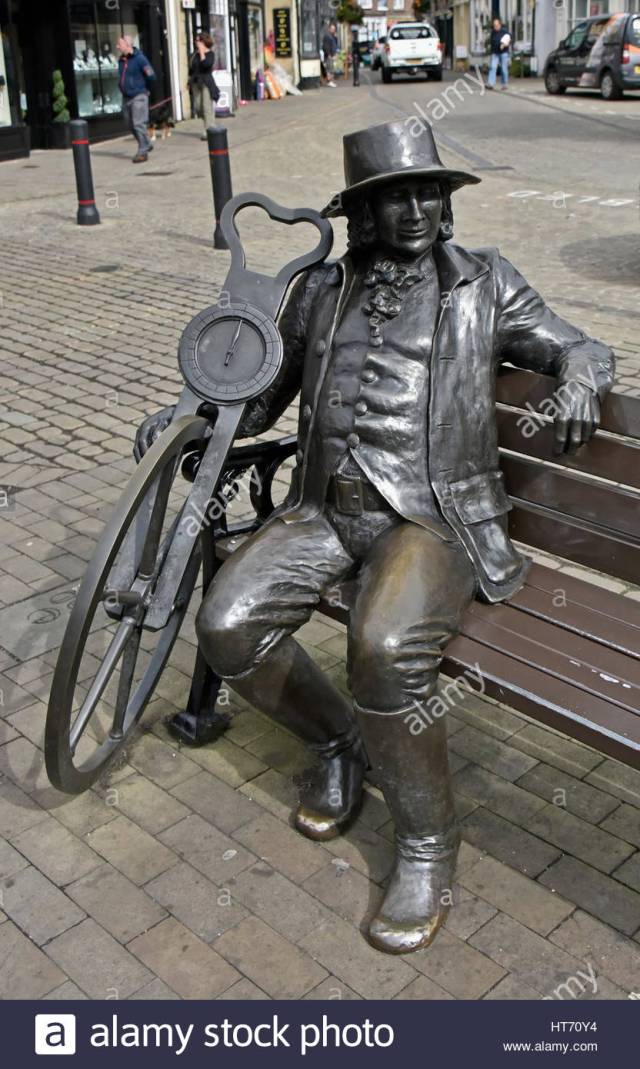 “So valued by Knaresborough’s locals is their legendary road-builder that in 2008 they raised £30,000 to have his tall, portly figure immortalized in bronze by Barbara Asquith. Grasping a surveyor’s wheel in his right hand, Jack’s statue sits on a bench in the town centre, just outside the Blind Jack’s Pub. Although divided by over two centuries, present-day locals may sit beside Jack whenever they wish.”

Additional Resources to Extend Your Reading:

Ian Duhig’s The Blind Roadmaker is out now.

Fabulous Tales of The Life of John Metcalf can be found HERE.

The Life of John Metcalf by the man himself.

Tales of Metcalf’s Love Life can be found HERE.