John Reginald Halliday Christie, known to his family and friends as Reg Christie, was an English serial killer active during the 1940s and early 1950s and is the subject a new film based upon his life of crime. Personally, the 1971 film with Richard Attenborough was creepy enough for me. I do not wish to relive the experience. That being said, what do we know of Reginald Christie?

Christie was raised in Halifax, then in the West Riding of Yorkshire. He was abused by his father and dominated by his mother and sisters. Christie won a scholarship to Halifax Secondary School when he was 11. He excelled particularly at mathematics and algebra, and was skilled at detailed work. It was later found he had an IQ of 128. He sang in the choir and became a scout, but he was unpopular with his fellow pupils. Upon leaving school in 1913, he worked at various jobs and eventually became an assistant movie projectionist.

By the time he reached puberty, he already associated sex with death, dominance and violent aggression, rendering him impotent unless in complete control. His first attempts at sex were failures, branding him with “ugly” taunts throughout adolescence. He was also a hypochondriac and hysteric, and often exaggerated or feigned illness as a ploy to get attention.

Christie enlisted as a signalman in World War I and was sent to the front in 1918. He was hospitalised after a mustard gas attack, claiming to have been blinded. No record of his supposed blindness exists however; in 10 Rillington Place, author Ludovic Kennedy wrote that Christie exaggerated his blindness, as well as the three-year period afterward in which he was mute.

Christie married 22-year-old Ethel Waddington from Sheffield, on May 10, 1920. It was a dysfunctional union, as Christie was impotent with her and frequented prostitutes. Friends and neighbours gossiped that she stayed with him out of fear. They separated after four years, when Christie moved to London and Ethel lived with relatives.

Over the next decade, Christie was convicted for many petty criminal offences. These included: three months’ imprisonment for stealing postal orders while working as a postman on April 12, 1921; nine months in Uxbridge jail in September 1924 for theft; six months’ hard labour for assaulting a prostitute  with a cricket bat (with whom he was living in Battersea) in May 1929; and three months’ imprisonment in 1933 for stealing a car from a priest who had befriended him.

Christie and his wife reconciled after his release in November 1933. He did not reform, however; he continued to seek out prostitutes to relieve his increasingly violent sexual urges, which included necrophilia.

In December 1938, Christie and his wife moved into the ground floor apartment of 10 Rillington Place in the Ladbroke Grove neighbourhood of Notting Hill. On the outbreak of World War II, he applied to join the police force and was accepted, and was assigned to Harrow Road police station. Christie began an affair with a woman working at the police station whose husband was a serving soldier. The relationship lasted until December 1943, when he resigned. The husband caught them in bed and beat Christie up.

Christie’s first victim was Ruth Fuerst (August 1943), an Austrian immigrant. He strangled her while he raped her, a marker for several of his crimes to come. His second victim was Muriel Eddy (October 1944), a woman known to him from work. He tricked her into inhaling carbon monoxide by promising to cure her bronchitis with a “special mixture” he had concocted. When she was unconscious, he strangled her and raped her post-mortem. These two victims were buried in the communal garden behind the Rillington Place house.

The war’s end appears to brought a lull in Christie’s growing need for death and sex. Timothy Evans and his pregnant wife, Beryl, moved into the top-floor flat of 10 Rillington Place in April 1948. On October 10, Beryl gave birth to a daughter, whom they named Geraldine. In November 1949, Beryl Evans found out she was pregnant again, and feared they could not afford another child. Evans later told police that Christie promised the couple he could abort the baby. There are several conflicts versions of how Beryl died. The most likely is that Christie pretended to aid in an abortion. When the gas he gave her did not put her to sleep, Christie knocked her out and then strangled her before again having sex post-mortem. He then murdered their daughter and incriminated Timothy in his family’s deaths. When Evans returned from work that night, Christie told him that Beryl had died during the procedure, and that they had to hide the body (abortion was illegal in England at the time). Christie then convinced Evans to stay with a relative in Wales and leave Geraldine in his care. Evans later said he returned to the apartment several times to ask about Geraldine, but Christie had refused to let him see her.

During a search of 10 Rillington Place on December 2, 1949, the police found the bodies of Beryl and Geraldine Evans hidden in the wash house in the back garden. Both had been strangled. When Evans was shown the clothing taken from the bodies of his wife and child, he was also asked whether he was responsible for their deaths. This was, according to Evans’ statement, the first occasion in which he was informed that his baby daughter had been killed. Evans, (according to Kennedy) said ‘yes, yes’. He then confessed to having strangled Beryl during an argument over debts and strangling Geraldine two days later, after which he left for Wales.

Evans later recanted this testimony, and the case went to trial, which began on January 11, 1950. Christie was a key witness for the prosecution, and was instrumental in Evans being found guilty two days later. The jury took only 40 minutes to come to this decision. After a failed appeal on February 20, Evans was hanged on March 9, 1950.

Due to the public exposure of his previous criminal record during the Evans trial, Christie lost his position at the Post Office Savings Bank. Reportedly depressed, he finally found a new position as a clerk at the British Roads Transport service in August 1950. He left that position on December 6, 1952. Christie told everyone he had secured another position in Sheffield, and he and his wife would move there after the first of the year. Three years had passed since his last murder. However, in December 1952, Christie told his neighbors that his wife had gone ahead to set up their household in Sheffield. In truth, he had killed her  on the night of December 14 and buried her beneath the house’s floorboards. He covered his wife’s absence by writing letters to her sister saying that Ethel had rheumatism in her hands and could not pen the letters on her own. During this time, he sold his wife’s wedding band, engagement ring, and watch.

On January 8, 1953, Christie sold most of his furniture. He kept three chairs, a kitchen table and a mattress to sleep on. On February 2, he forged his wife’s signature on her bank account and emptied it. After early February, Christie no longer bothered to answer the letters from relatives inquiring after his wife. Between January 19 and March 6, 1953, Christie murdered three more women he invited back to 10 Rillington Place: Kathleen Maloney from Southampton, Rita Nelson, and Hectorina MacLennan. He gassed, raped and strangled each, boarding up their bodies in the cupboard. With no money left upon which to live, Christie simply walks away from the house and lives upon the streets and in public shelters.

The new tenant at 10 Rilling Place discovered the bodies in the wardrobe. Police were summoned, and the other bodies were uncovered. Christie was soon arrested. In custody, he confessed his crimes (except for the death of the infant Geraldine). His defense pleaded insanity, but the jury still found Christie guilty. He was hanged on 15 July 1953. 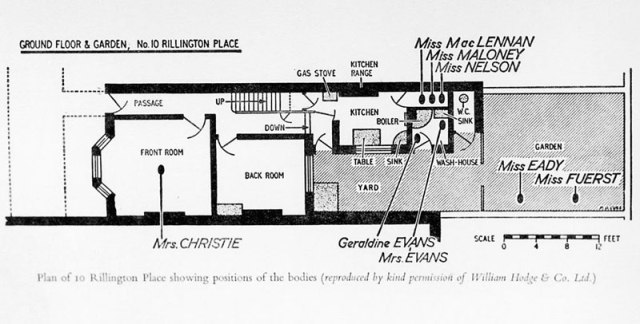 The BBC mini-series, starring Tim Roth and Samantha Morton as the Christies, began November 29 and continued on December 6 and 13. Did you watch? 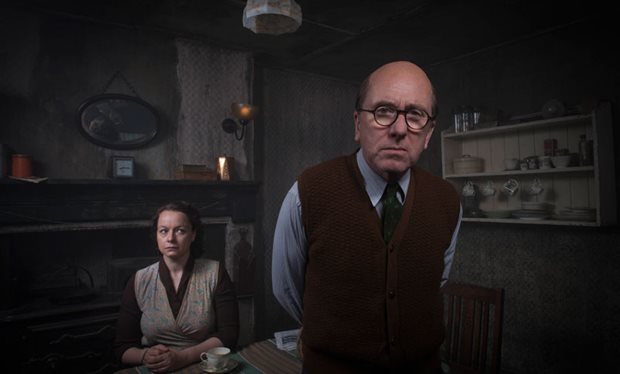 Murderpedia (The main source used for this piece.)

Why did the BBC make a new drama about serial killer John Christie? New Statesman