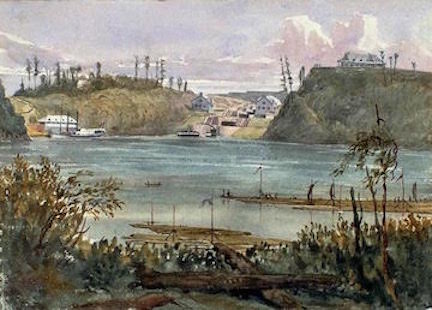 One of the things I love about writing is…wait for it…travel! That’s my favorite form of research.

In the process of writing The Renegade Wife, I discovered the Rideau Canal. While the canal itself plays a relatively minor role in the book, which is set in the Rideau watershed, I became fascinated with it.

Soon after the War of 1812, the duke of Wellington proposed that Britain build a canal that linked Kingston on Lake Ontario with the mouth of the Rideau River on the Ottawa River, thus bypassing the Saint Lawrence where it was vulnerable to attack by those pesky Americans.

The project was assigned to Lieutenant Colonel John By of the Royal Engineers, who began work in 1826 using local contractors with the design and engineering work done by the Royal Engineers. Most of the actual labor was done by hand using pickaxes and shovels, much of it by French and Irish workers. These men cut through virgin forest and untamed rivers, using existing waterways where feasible and canalizing them where rapids or other features made that impossible. They created lakes, dams, and locks where needed. John By insisted that the

The author sitting on a lock gate

locks and the canals be wide enough to accommodate steamships, a farsighted idea that greatly increased the value of the canal, but also sharply increased its cost.

Among the notable features are the eight monumental locks at Ottawa, Bytown itself (now called Ottawa) built for the workers, a stone bridge spanning two cliffs at Bytown, and the Stone Arch Dam, a massive sixty-foot dam at Jones Falls which was the largest dam in North America and the third largest in the world when built. They also built blockhouses at strategic points to protect the canal in case of invasion from the south.

An estimated 1000 people died building the canal, approximately 500 of them from malaria, which was particularly virulent at Jones Falls. That number doesn’t include deaths from disease among the women and children who followed the workers.

The canal never served its original military purpose after its completion in 1832. Instead, it served as the gateway to the settlement of Ontario and commercial development. Poor Lieutenant Colonel By was called back to London to account for the cost overruns and died in disgrace. The Rideau, now a UNESCO World Heritage Site, is still in use, mainly for recreational purposes, and a statue of John By watches over it at Ottawa.

I confess that I did most of my research about the Rideau via the Internet while I was writing the book. I couldn’t resist a trip to see it for myself, however. We walked across the lock gates at Ottawa and watched boats going up and down the eight giant steps of the locks. We also crossed the dam at Jones Falls, which is impressive today. I can only imagine how it must have awed visitors in the 1820.

Rand Wheatly, reclusive would-be timber baron, shelters a woman on the run. Now she’s gone again. Can he save her and himself as well?

Betrayed by his cousin and the woman he loved, Rand Wheatly fled England, his dreams of a loving family shattered. He clings to his solitude in an isolated cabin in Upper Canada. Returning from a business trip to find a widow and two children squatting in his house, he flies into a rage. He wants her gone, but her children are sick and injured, and his heart is not as hard as he likes to pretend.

Meggy Blair harbors a secret, and she’ll do whatever it takes to keep her children safe. She’d hopes to hide with her Ojibwa grandmother, if she can find the woman and her people. She doesn’t expect to find shelter with a quiet, solitary man, a man who lowers his defensive walls enough to let Meggy and her children in.

Their idyllic interlude is shattered when Meggy’s brutal husband appears to claim his children. She isn’t a widow, but a wife, a woman who betrayed the man she was supposed to love, just as Rand’s sweetheart betrayed him. He soon discovers why Meggy is on the run, but time is running out. To save them all, Rand must return and face his demons.

She pushed away from the door. “If you’re finished, I’ll clear up your dishes.

“Damn it woman, I fend for myself here.” He looked her up and down. He noticed her deep blue eyes, midnight black hair, and dusky skin. “What are you? Gypsy? Is that where you learned how to diddle a man out of his belongings?”

She drew her back up straight and squared her shoulders. The gesture pulled her dress tight across obviously ample breasts.

There’s a practiced enticement. She’s in for a surprise if she thinks that trick will work on me.

Chin high, she met his eyes without flinching. “My grandmother is Ojibwa, my father was French, and my husband was a Scot. You can despise whichever one of those your English heart chooses, or all of them, but I am not a thief.”

She grabbed her skirt and took a step toward the door. “Do fend for yourself. We’ll leave as soon as we can.”

“I’ll decide when you’re a thief,” he snarled, bringing her to a halt. “It’s my house.”

For purchase on Amazon.      https://www.amazon.com/Renegade-Wife-Children-Empire-Book-ebook/dp/B01LY7IRT6/

Raised with all the privilege of the English aristocracy, forged on the edges of the British Empire, men and woman of the early Victorian age seek their own destiny and make their mark on history. The heroes and heroines of Caroline’s Dangerous Series overcame challenges even after their happy ending. Their children seek their own happiness in distant lands in Children of Empire.

Dangerous Works, a novella prequel to both Children of Empire and the Dangerous Series (and in which Rand first appears) is available for free at:

Award winning author Caroline Warfield has been many things: traveler, librarian, poet, raiser of children, bird watcher, Internet and Web services manager, conference speaker, indexer, tech writer, genealogist—even a nun. She reckons she is on at least her third act, happily working in an office surrounded by windows while she lets her characters lead her to adventures in England and the far-flung corners of the British Empire. She nudges them to explore the riskiest territory of all, the human heart.

NOW FOR THE GIVEAWAY!!!! To celebrate the launch, Caroline will present a copy of one of her Dangerous Series books to one randomly selected person who comments below. The person can choose from the books found here: