Life Below Stairs: Servants as a Status Symbol

A trend we incur during the Victorian era was the obsession to have more servants than one’s neighbors or comparable members of one’s social circles. It was “Keeping up with the Joneses” with servants, rather than with expansive homes and expensive cars. It was said that some mistresses of the house did without essentials such as food in order to employ a larger staff than her associates. The idea reminds me of William Thackeray’s The Book of Snobs in which his fictional Lady Susan Scarper, with her “jobbed” horses and her young daughters, who were always assuaging their constant hunger pains by eating buns. [The Book of Snobs is a collection of satirical  works by William Makepeace Thackeray, first published in the magazine Punch as The Snobs of England, By One of Themselves. Published in 1848 the book was serialised in 1846/1847 around the same time as Vanity Fair. While the word “snob” had been in use since the end of the 18th century Thackeray’s adoption of the term to refer to people who look down on others who are “socially inferior” quickly gained popularity.] Accumulating a large number of servants was the best way to rise in social circles.

According to Frank Huggett in Life Below Stairs (page 54), “In 1844 one writer on domestic economy published a table of recommended establishments of servants for various incomes. Only noblemen of of high rank and great wealth could afford to maintain first-rate establishments…. People with much smaller incomes of £4500 to £5000 a year should have an establishment of the second rate, consisting of a butler, who also doubled as house-steward, and four other male and nine women servants. In third-rate establishments, suitable for those with incomes of £3500 to £4000 a year, the butler also had to act as valet, and there should be only one footman, one under-footman and seven women. Establishments of the fourth rate, where the income was £1500 to £2500, should be composed of two men and four women; while the fifth-rate (£1000 to £1200) should have only one man-of-all-work and three women. People with a sixth-rate establishment of a cook, a housemaid and a footboy, while those with only £450 to £500 a year would have to do without the footboy. An eighth-rate establishment (£250 to £300) should consist of one maidservant and a girl; and the ninth (£150 to £200) of a solitary maid-of-all-work. ‘Incomes still less,’ the writer added, ‘will admit of a girl only, or with the occasional use of a charwoman.'”

Families of the lower “rates” saved by going without the ultimate status seeker, that of the services of a male servant. We must recall that “butlers,” for example, not only were regarded as the prized servant, but were expensive. Beyond the butler’s salary, many made demands for excellence in food and drink, assistants, etc. For this reason, many middle-class households relied upon female help and only hired men as gardeners, coachmen, grooms, tigers, etc. 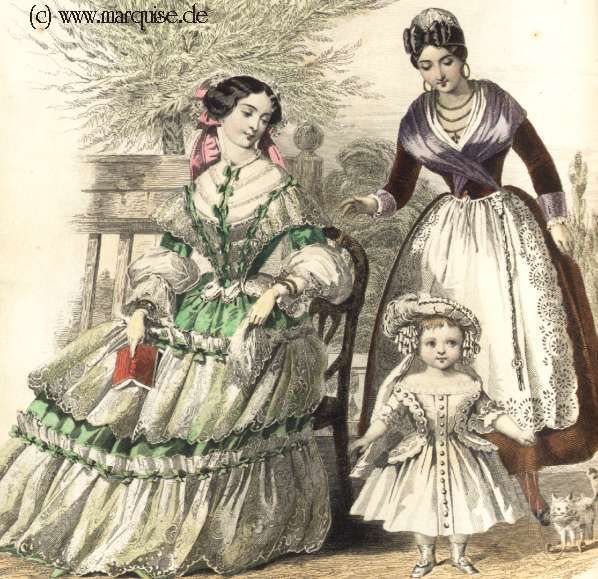 Servants’ clothes are rarely shown in fashion plates. A nurse is pictured in this 1852 image only because she and the child are both status symbols.

Huggett goes on to say, “By present-day standards, the middling middle classes lived in more than ample accommodation. When Alice Pollock married a lawyer  in the Land Registry towards the end of Queen Victoria’s reign, they could afford to move on his salary of £750 a year (plus an allowance of £200 from his mother into a house in Belgrave Road, London, with five bedrooms, a bathroom, a double drawing room, a dining room, a study and a workroom. Mrs Pollock employed the customary trio of servants for such a home: a cook at £20 to £26 a year: a parlour maid at £16 to £18: and a housemaid at £12 to £14 which was cheap enough as their total wages only consumed 5 to 6 per cent of the Pollocks’ total income. [Alice Pollock, Portrait of My Victorian Youth, page 122] To this essential triumvirate, there could be added as the exigencies of birth demanded, or as na increase in income permitted, other servants such as nursemaids, nurses, ladies’ maid, kitchenmaids, tweenies (who assisted the housemaid in the morning and the cook in the afternoon) and governesses. The latter, who were very often German girls or the daughters of impoverished clergymen like Charlotte Brontë, mix easily with the other servants and invariably too poor to be accepted as equals by the daughters of the household.”

5 Responses to Life Below Stairs: Servants as a Status Symbol