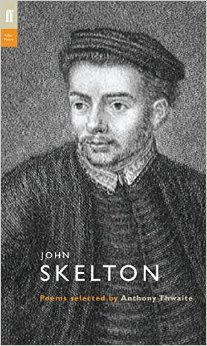 The Poetry Foundation tells us something of John Skelton. “No one can deny the power, endurance, and memorable lines of the work of John Skelton; he is indisputably the first major Tudor poet, writing during the reigns of Edward IV, Richard III, and (for most of his career) Henry VII and Henry VIII. His poems are by turn lyric, passionate, vitriolic, learned, allusive, bewildering, scriptural, satiric, grotesque, and even obscene; his one extant play, Magnificence (circa 1530), makes dramatic allegory sternly didactic and pointedly political. Yet while Skelton’s importance is clear enough, just how he is to be read and evaluated has always been contested. His poems might be royalist in tone, or they might be highly critical of government; he could write for the court and his patrons, the Howard family, yet still need political sanctuary; he could write a moving lament for a young novitiate’s loss of a pet sparrow at the same time that he was castigating his own parish curate, the archbishop of York, and the lord chancellor. While his poems seem to have circulated widely, few of them were published in his lifetime. Nor have readers in later times fared much better in penetrating his meaning and appreciating his style. After the Reformation, George Puttenham found this very Catholic poet a ‘rude railing rhymer,’ and Ben Jonson used him as a character, but in a character, but in an antimasque; by the time of Alexander Pope he was “beastly Skelton,” offensive for his attack on a village alewife in The Tunning of Elinor Rumming (circa 1521), a poem which nevertheless remained in print throughout the eighteenth and nineteenth centuries, often as the single representation of his art.

“In recent scholarship, there remains much disagreement. John M. Berdan, without much quarrel, called Skelton in 1920 “the greatest English poet to have been born in the fifteenth century”; he is seen as an erudite and clever poet of considerable breadth by F. W. Brownlow; an early-Tudor humanist steeped in classical learning by William Nelson; a poet primarily concerned with the literary aspect of his poems, as in his play with the medieval strategies of satire, by A. R. Heiserman; a chiefly rhetorical poet who invokes a reader response through his personal engagements and disengagements with his subjects for Stanley Eugene Fish; and essentially a priest who used poetic and dramatic works to instruct the laity by basing them in scriptural lessons and liturgical services of the Roman Catholic church for Arthur F. Kinney. Perhaps the best way to recover and understand Skelton’s work is to consider all of these perspectives.”

Skelton began his career as a sober scholar and ended it as a ribald priest. He brought to his vernacular poems an originality of style. He was known for his flow of voluble verse, unrestrained satire and jocularity, and a profusion of grotesque imagery mixed with Latin and East Anglican phrases. It is as a satirist that Skelton displays great merit. His best satires are (1) “The Boke of Colin Clout,” which is a general attack on the ignorance and sensuality of the clergy; (2) “Why Come Ye Not to Courte,” a fierce invective against Cardinal Wolsey from whom the poet had not received expected preferment; and (3) “The Bouge of “Courte,” a type of allegorical satire on the right to nations at King Henry VIII’s table.

“‘The Bouge of Court’ is typical of the medieval tradition in several ways. [“Bouge” means “Rewards” or “Provisions.”] It uses rhyme royal to tell a dream allegory, relies heavily on personification and the use of court terms, and has the usual astronomical opening and closing apology. The prologue begins with allusions to the sun, the moon, and Mars. The narrator wishes he could write, but being warned by Ignorance not to try, he lies down and dreams of going aboard a ship, The Bouge of Court, which is owned by Sans Peer and captained by Fortune. The narrator, who reveals that he is called Drede, is first accosted and frightened by Danger, the chief gentlewoman of Sans Peer. Before Drede can flee, he is soothed by Desire, who persuades him to stay aboard.

“After this introduction comes the main body of the poem, which consists of conversation between Drede and seven of the passengers, Skelton’s representations of the seven deadly sins. Drede first describes the approaching figure in unforgettable detail; then, as the figure speaks, an even sharper focus of his personality is achieved. The seven passengers are named Favel or Flattery, Suspect, Harvy Hafter, Disdain, Riot, Dissimulation, and Deceit. Harvy Hafter is Skelton’s most colorful creation in the poem, and he is still around.” (The Poetry of John Skelton) 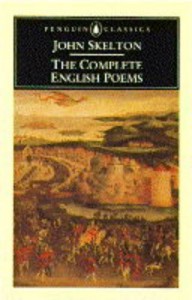 In the “Picture of Riot from the Boure of Courte,” for example, Riot is described as rushing upon deck, unkempt and ragged, throwing dice, and swearing. His hair has grown through his hat, his eyes are bleared, and his face shiny. His clothes were torn and tattered, patched in places, broken through in others as at the elbows and knees. He went along singing, his dagger by his side and his pockets empty.

“Philip Sparrow” is a mock-elegy for the loss of a girl’s pet sparrow. This girl’s name is Mistress Jane Scope. The mock-elegy is written in typical Skeltonian verse, which is a rattling, breathless sort of doggerel. The verse is usually trimeter, but it is too irregular to be classified. There are frequent lines in Latin so it seems almost macaronic verse. “Following a medieval point of view, Skelton wrote this poem in the short-lined couplets, tercets, and quatrains now known as Skeltonic verse. This poem is Skelton’s most playful and most popular work; in it, readers see the poet in a mood in which he casts dignity and restraint aside and indulges himself in a bit of fantasy. He describes the activities of the bird, its death, and its funeral. It is a long and rather loose poem that can be broken into three distinct parts. Skelton gives the reader his appraisal of Geoffrey Chaucer, John Gower, and John Lydgate, and uses the opportunity to display his wide reading in Greek and Latin. He parodies the funeral mass by having the whole host of birds chant over the dead body of Philip Sparrow.” (The Poetry of Skelton)

“Tunning of Eleanor Rumming” is a satire of the drunken hags of the time. “Tunning” means “Brewing.” The poem begins with a powerful and disgusting portrait of Eleanor;

Her loathly lere (face)/ Is nothing clear/ But ugly of cheer/ Droopy and drowsy/ Scurvy and lousy.

Criticism of John Skelton: As a court poem and cleric and satirist, most view Skelton as half medieval and half modern. He is a herald of the Renaissance, which was soon destined to arrive in England. Like the later Elizabethans, he used classical models for some of his verse, but like the poets of the Renaissance, his poetry is formless. His diction is curious for it does not follow standards of English. He mixes Latin phrases with his native dialect.

“One fundamental difficulty in understanding Skelton is that very little is known of his life, and the absence of facts has been filled in over the centuries with legend and myth as well as, on occasion, questionable evidence—there were about one hundred John Skeltons born in the fourteenth and fifteenth centuries—or conflicting evidence—he seems to have written The Garland of Laurel both near the middle and the end of his life, and the result is a layered poem with some obscure passages. There are few extant documents that can be associated with him with certainty, so that the biography of the poet whom William Wordsworth once described as “a demon in point of genius” rests on such demonizing Protestant works as the anonymous Merry Tales of Skelton (1567), which make him into a legendary subject for jest and even scurrility, and on the genius Skelton inscribes for himself in his work. Both sources can be unreliable if not treacherous unless the reader is careful, so that any reconstruction of his life is more or less conjectural. (Poetry Foundation)