Who Were The “Ton” and the “Beau Monde”?

Le bon ton is a French phrase meaning “the good style” or “good form.” One could be said to have good ton–meaning good style. So one could be part of the Ton, if one had the style for it–which is why Beau Brummell could be a leader of fashion and society despite not having much of a background (very middle class). The term beau monde came into use in the early 1700s; it literally means fine world. It is used for the fashionable world or high society.

Ton (le bon ton) tells us, “The ton” is a term commonly used to refer to Britain’s high society during the late Regency and the reign of George IV,  and later. It is a French word meaning (in this sense) “manners” or “style” and is pronounced as in French. The full phrase is le bon ton meaning “good manners” or “good form” – characteristics held as ideal by the British beau monde. The term le beau monde, literally meaning “the beautiful world” (but here meaning “fashionable people,” or “fashionable society”), was similar to le bon ton during the nineteenth century. “The ton” has also been used to refer to the Upper Ten Thousand of later 19th-century society, including most of the peerage, aristocracy and wealthy merchants or bankers of the City (of London).

The ton might be expanded to include the “upper ten thousand” (not just the upper four hundred). [Upper Ten Thousand, or simply, The Upper Ten, is a phrase coined in 1852 by American poet Nathaniel Parker Willis to describe the upper circles of New York, and hence of other major cities.] All things considered, a duke might have poor ton, while a mere mister might have le bon ton (as in with the Brummel, again, who had no title). Needless to say,  money/wealth could make a difference, but not without a sense of style or good form performed by the individual. And a title could matter, but if one had poor manners with that title, Society might well turn its back for displaying poor form.

John Mullan in a 2013 article for The Guardian tells us, “Toffs have always seemed to know how to keep the best things for themselves, especially when everyone is sure that their power is waning. It has long been conventional to see the 18th century as the period in which Britain passed out of the control of the court and the aristocracy. Commerce became the power in the land; new codes of politeness welded the propertied classes together, and these included more and more of ‘the middling sort.’ The patrons and philanthropists of this self-consciously modern society were the merchants and men of trade whose portraits were painted by Hogarth. Many of its cultural heroes – Samuel Richardson, David Garrick, Hogarth himself – came from humble backgrounds. The ancient régime was gone.

“[The] study of high society in the period corrects this impression. [The] 18th‑century aristocracy used fashion – and the willingness of the classes immediately below them to be dazzled by fashion – to assert their influence anew…. One small triumph of the ever-adaptable English upper class was to get this term, with its unmistakable tone of self-applause, accepted. There was a cluster of other words for those who embodied style and inhabited the rapidly spreading West End of London: ‘people of fashion,’ ‘the great world’ and, best of all, ‘the ton.’ The press stoked the public fascination with the most glittering members of this class.”

The  word ton was not used to refer to people as a whole in the Regency period, but for  discussing people of good taste. I am not certain, but perhaps it was Georgette Heyer who started calling the whole group of aristocrats the Ton.

Although the term referred to fashionable sect, that does mean the actual members of the “ton” used the word to stipulate members of their group. It is more likely that they would speak of those without manners or those who preened too much as the dandy set or fops. Then might consider a person of poor manners as “not of our sort.” Needless to say, they also thought that only the members of the upperclass, the well bred among them, could possess good taste. Beau Brummell, for example, would not have had any influence if he had not been a member of the Prince of Wales’ coterie and taken up by the Whigs. Though Brummell’s downfall is often spoken of as having started with his bad ton of arguing  with and then insulting the Prince Regent, but the timing also coincides with the  Whigs’ disenchantment with the Regent and the switching of sides by many on many issues. [For more on the Rise and Fall of Beau Brummell, visit Rachel Knowles’ Regency History.]

While the Prince and  the Whigs were aligned, the Whigs castigated Prince George’s wife.  However, when the Whigs discovered that the Prince had gone back  on his promise to them, they started supporting Princess Caroline, while the Tories, who once had supported her now turned their backs on her. Who was in and who was out was not simply a person who broke the unspoken rules. Politics had much more to do with  things than we sometimes assumed.

The Ton were aristocrats and upper level gentry who attended the London Season and Little Season. This was much like an awards program with an A-list of celebrities.  To be on the “list,” one must possess proper family connections, be wealthy, own land, and appear untouched by trade or by the need to earn a living.  Young ladies presented to the Court were A-list, those who were not presented, but otherwise met the criteria to be invited to Almack’s were the B-list, etc. People advanced and grew richer through connections more than anything else at this time.) 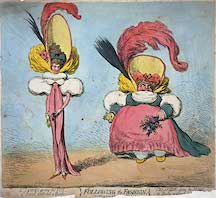 What do y’all think about using James Gillray’s print “Following the Fashion, St. James’s Giving the Ton a Soul Without a Body” from 1796 as documentation of the ton? (One can find the image at Draw Paint Print)

A quick glance through some of my reference books revealed there are also publications that use bon ton as a descriptor in their titles. The New Bon Ton Magazine (Telescope of the Times) that was published from 1818-1821.

Slang: A Dictionary of the Turf, the Ring, the Chase, the Pit, of Bon Ton and the Varieties of Life by John Bee in 1823.

I particularly like Hannah Greig’s The Beau Monde: Fashionable Society in Georgian London from Oxford University Press. The book contains…

7 Responses to Who Were The “Ton” and the “Beau Monde”?