Posted on January 6, 2016 by reginajeffers

We know that Sir Thomas Malory compiled the tales of King Arthur to give us Le Morte Darthur. But was the real Thomas Malory?

Encyclopedia of World Biography | 2004, COPYRIGHT 2004 The Gale Group Inc., tells us some important facts regarding the author known as Thomas Malory.  “The English author Sir Thomas Malory (active 15th century) wrote Le Morte Darthur, one of the most popular prose romances of the medieval period. The work was the first full-length book in English about the adventures of King Arthur and the Knights of the Round Table.

“Although Le Morte Darthur (also known as Le Morte d’Arthur) is universally accepted as a masterpiece of imaginative literature, so much mystery surrounds the identity of the author (that is, which one of several Sir Thomas Malorys of the 15th century actually wrote it) that any one definitive biography seems imprudent. The only direct information extant concerning the author is that a Sir Thomas Malory completed the book while he was a “knight-prisoner” in the ninth year of Edward IV’s reign, from March 4, 1469, to March 3, 1470. All the rest is conjecture.

“In the 16th century John Bale associated Malory with Welsh origins mainly because of a place called Mailoria in Wales and because of the subject matter of the book. There are no records, however, of a Thomas Malory in Wales in the 15th century. Although several other Thomas Malorys were suggested, the next serious candidate was identified by George L. Kittredge at the end of the 19th century as Sir Thomas Malory, Knight, of New-bold Revel, Warwickshire. This Thomas Malory, who, as the record shows, led an active and colorful life, has been accepted as the author of Le Morte Darthur by most scholars.

“Although Malory’s exact date of birth is unknown (probably around the year 1410), he succeeded to his father’s estates in 1434. He served at the siege of Calais in the retinue of Richard Beauchamp, Earl of Warwick, in 1436, and he was elected as knight of the shire for Warwickshire in 1445. Most of the other records show that he was frequently in conflict with the law, spending much of his last 20 years in and out of prison. In 1443 he and another man were charged with assault and robbery. Over the years he was accused of many offenses, including rape, armed assault, conspiracy to commit murder, horse stealing, and extortion. On at least two occasions he dramatically escaped from prison, and he was excluded from two general pardons in 1468. He was committed to Newgate Prison in 1460, but he was apparently freed to fight with the forces of the Earl of Warwick in Northumberland in 1462. Although he had pleaded not guilty to all charges, he probably was in prison at the time of his death on March 14, 1471.

“However, a recent study by William Matthews presents a rather convincing argument for yet another candidate, about whose life unfortunately very little is known, one Thomas Malory of Studley and Hutton, Yorkshire. Emphasizing a linguistic approach, Matthews analyzes the backgrounds and careers of four possible candidates, stating that the criteria by which they must be judged are certain facts concerning Le Morte Darthur. These facts are that the work was written by one Sir Thomas Malory and completed by 1470; that it exemplifies the religious and secular aspects of medieval chivalry; that its major source is a French book of several prose romances; that it draws heavily from Yorkshire and other northern romances; that its language is mainly standard English with frequent scattering of northern dialect words and forms; that the author was familiar with places, institutions, and legends of northern England; that he was a knight-prisoner while he wrote the book; and that he seems to have had Lancastrian sympathies. Matthews responds to the possible weaknesses in the case of the Yorkshire Malory (he is not actually described as a knight, and there is no record of his having been a prisoner) by pointing out that, although this Malory’s family was an eminent one, in the 15th century titles were used rather loosely and often not used even when appropriate, and that it was not the custom in the 15th century to keep records of prisoners of war, as Malory may have been as a result of an ill-fated expedition to France in 1469. Matthews concludes that since the author of Le Morte Darthur ‘was so remarkably familiar with northern dialect, northern literature, and northern affairs…. he must have been a northerner himself…. probably a Yorkshireman [and that] Thomas Malory of Studley and Hutton is the only Yorkshireman of appropriate name and age who has been found in documents at the appropriate time.’ 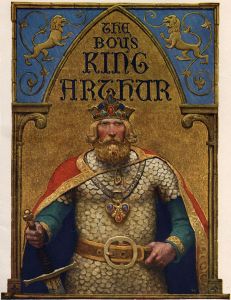 “In any case, Malory related in vigorous prose the familiar stories of the Arthurian legend. The work was first published in 1485 by William Caxton. In this edition it is divided into books and chapters, thus making it appear to have continuity, while the version in the Winchester manuscript is divided into a series of individually entitled tales, indicating to some scholars a lack of artistic unity. The sources for Malory’s work are mainly 13th-century French prose romances, with the exception of book V, which is a prose adaptation of the alliterative Morte Arthur, a 14th-century English poem.”

Meanwhile, The Columbia Electronic Encyclopedia, 6th ed. Copyright © 2012, Columbia University Press, gives us this answer to the true identity of Sir Thomas Malory: “Malory, Sir Thomas, d. 1471, English author of Morte d’Arthur. It is almost certain that he was Sir Thomas Malory of Newbold Revell, Warwickshire. Knighted in 1442, he served in the parliament of 1445. He was evidently a violent, lawless individual who committed a series of crimes, including poaching, extortion, robbery, rape, and attempted murder. Most of his life from 1451 on was spent in prison, and he probably did most of his writing there. Malory’s original book was called The Book of King Arthur and His Noble Knights of the Round Table and was made up of eight romances that were more or less separate. William Caxton printed it in 1485 and gave it the misleading title of Morte d’Arthur. This work is generally regarded as the most significant accomplishment in English literature in the two centuries between the works of Chaucer and those of such masters as Spenser and Shakespeare. The last medieval English work of the Arthurian legend, Malory’s tales are supposedly based on an assortment of French prose romances. The Morte d’Arthur is noted for its excellent dramatic narrative and the beauty of its rhythmic and simple language. It remains the standard source for later versions of the legend.”

Plot of the Story: The story contains the famous legends surrounding King Arthur, his knights of the Round Table, and his lovely queen Guinevere. It is a compilation of stories based upon French and English sources. For the first time, the cycle of stories, which had been developing gradually, are woven into a consecutive and loosely unified whole centered in Arthur and the Round Table. The Morte D’Arthur serves as the standard source for later treatments of the Arthurian subjects. In 21 books, the story covers the founding of Arthur’s kingdom, the institutions of chivalry practiced by the knights sitting at the Round Table, the quest for the Holy Grail, Arthur’s death, and the fall of his kingdom.

The sample page of the document above gives us, “This page opens the third book. It starts, “In the begynnyng of Arthure, after he was chosen kynge by adventure and by grace…” People’s names and some place names are shown in red lettering, known as ‘rubrication’. Malory goes on to describe the wedding of Arthur to Queen Guinevere. Arthur tells Merlin, “I love Guenever the king’s daughter, Leodegrance of the land of Cameliard, the which holdeth in his house the Round Table that ye told he had of my father Uther.” (British Library Online)