From Where Does That Word Come?

Posted on October 5, 2015 by reginajeffers

We are back with more words and phrases with interesting origins.

Abracadabra is a late 17th Century word that was originally a mystical word engraved and used as a charm to ward off illness. Coming to us from Latin, it was first recorded in a 2nd Century poem by Gnostic physician Serenus Sammonicus. 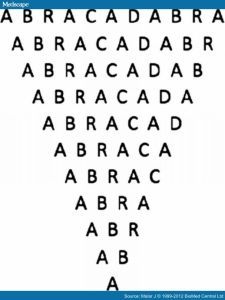 From Medscape Multispecialty (Quintus Serenus Sammonicus), we learn, “The somewhat mystical concept of bad air set the stage for an alchemistic malaria treatment in the third century CE. Quintus Serenus Sammonicus, physician to the Roman emperor Caracalla, directed patients suffering from fever and ague to wear an amulet with the inscription “abracadabra” in his didactic medical poem ‘Liber Medicinalis:’

“Write several times on a piece of paper the word ‘Abracadabra,’ and repeat the word in the lines below, but take away letters from the complete word and let the letters fall away one at a time in each succeeding line. Take these away ever, but keep the rest until the writing is reduced to a narrow cone. Remember to tie these papers with flax and bind them round the neck. [Wootton A: Chronicles of Pharmacy, volume 1. London: Macmillan and Co.; 1910::164–166.]

“After wearing the talisman for nine days, it was to be thrown over the shoulder into an eastward-running stream. Failing this treatment, Sammonicus recommended the application of lion’s fat, or the wearing of cat’s skin tied with yellow coral and green emeralds around the neck. [Wootton A: Chronicles of Pharmacy, volume 1. London: Macmillan and Co.; 1910::164–166.]

“Some scholars dismiss the word abracadabra as meaningless. Others, however, translate it as, “let the thing be destroyed”, “Out, bad spirit, out” (from the Hebrew words Abrai seda brai), or “Father, Holy Ghost, Word” (from the Hebrew words Ab, Ruach, Dabar).” [Skemer D: Binding words: Textual amulets in the Middle Ages. University Park, Pennsylvania: The Pennsylvania State University Press; 2006::25.]

Caber is an early 16th Century word. It stands for a roughly trimmed tree trunk used in the Scottish Highland sport of “tossing the caber,” which involves heaving the trunk into the air so that it lands on the opposite end. The word comes from the Scottish Gaelic caber ‘pole.’ “In Scotland the caber is usually made from a Larch tree and is typically 19 feet 6 inches (5.94 m) tall and weighs 175 pounds (79 kg). The person tossing the caber is called a “tosser” or a “thrower”. It is said to have developed from the need to toss logs across narrow chasms (in order to cross them) or by lumberjacks challenging each other to a small contest.”  [Caber]

Magnet is a late Middle English word, originally a name for “lodestone.” Derived from the Latin words magnes, magnet- and from the Greek magnes lithos ‘lodestone,’ it likely came into being from the Anglo-Norman French magnete. In the early 17th Century we find the first written references to the adjective “magnetic.” 1400-50; late Middle English magnete < Latin magnēta < Greek mágnēta, accusative of mágnēs, short for ( hē) Mágnēs (líthos) (the stone) of Magnesia

From the Oxford Dictionary of Word Histories [edited by Glynnis Chantrell, Oxford University Press, 2002], we learn that Proprietary is a late Middle English word. “A proprietary was originally a member of a religious order who held property. It is from late Latin proprietarius ‘proprietor,’ from proprietas. The adjective, recorded from the late 16th Century conveys ‘belonging to a proprietor’ is commonly applied in modern use to manufactured items which are patented [proprietary brand].

“During the Middle Ages, the proprietary church (Latin ecclesia propria, German Eigenkirche) was a church, abbey or cloister built on private ground by a feudal lord, over which he retained proprietary interests, especially the right of what in English law is “advowson”, that of nominating the ecclesiastic personnel.” [Proprietary Churches]

Dog and Pony Show “is a colloquial term which has come to mean a highly promoted, often over-staged performance, presentation, or event designed to sway or convince opinion for political, or less often, commercial ends. Typically, the term is used in a pejorative sense to connote disdain, jocular lack of appreciation, or distrust of the message being presented or the efforts undertaken to present it.

“The term was originally used in the United States in the late-19th and early-20th centuries to refer to small traveling circuses that toured through small towns and rural areas. The name derives from the common use of performing dogs and ponies as the main attractions of the events. Performances were generally held in open-air arenas, such as race tracks or public spaces in localities that were too small or remote to attract larger, more elaborate performers or performances. The most notorious was ‘Prof. Gentry’s Famous Dog & Pony Show,’ started when teenager Henry Gentry and his brothers started touring in 1886 with their act, originally entitled ‘Gentry’s Equine and Canine Paradox.’ It started small, but evolved into a full circus show. Other early dog and pony shows included Morris’ Equine and Canine Paradoxes (1883) and Hurlburt’s Dog and Pony Show (late 1880s). By the latter part of the 20th century, the original meaning of the term had been largely lost.” [Dog and Pony Show]

According to the Oxford Dictionary of Word Histories, Snuff has two meanings. The first meaning, coming from the late Middle English, of “‘suppress, extinguish’ is of obscure origin. The noun originally described the portion of a wick partly consumed during burning as it gave off light. The slang phrase snuff it meaning ‘to die’ dates from the late 19th Century.”

The second meaning of Snuff (also from late Middle English) was a verb meaning “‘inhale through the nostrils’; it comes from Middle Dutch snugger ‘to snuffle.’ The noun as a term for a preparation of tobacco inhaled through the nostrils dates from the late 17th Century and is probably an abbreviation of Dutch snuftabak.”

Umbrage is a late Middle English word coming to the language from the Old French and from the Latin umbra, meaning “shadow.” Early one, the word was used to indicate a “shadowy outline.” Eventually, the word transformed to mean “ground for suspicion,” which led to the current usage of an “offense.”

Raspberry is an early 17th Century word. The dialect rasp forms the first part of the word. It is an abbreviation for the obsolete word rapid ‘raspberry,’ which was also used as a collective. The word’s origin is unknown. In the 19th Century, the word took on the meaning of a derisive sound (coming to the language from the rhyming slang for “fart,” a shortening of raspberry tart. Rhyming slang was particularly used in British comedy to refer to things that would be unacceptable to a polite audience. The nomenclature varies by country. In the United States, Bronx cheer is sometimes used; otherwise, in the U.S. and in other anglophone countries, it is known as a raspberry, rasp, or razz – the origin of which is an instance of rhyming slang, in which the non-rhyming part of a rhyming phrase is used as a synonym. [Blowing a Raspberry]

Flummox is a mid 19th Century word (approximately 1830-1840), likely from a dialect origin flummock, meaning ‘to make untidy, confuse.’ It was first recovered in western counties and the north Midlands. 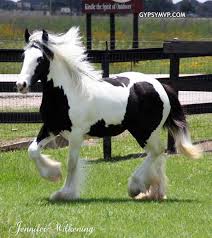 Piebald is a late 16th Century word. The word is used to describe certain horse markings. It comes from pie, as in magpie for the magpie’s black and white plumage + bald in the sense of being ‘streaked with white.’

“A piebald or pied animal is one that has a spotting pattern of large unpigmented, usually white, areas of hair, feathers, or scales and normally pigmented patches, generally black. The colour of the animal’s skin underneath its coat is also pigmented under the dark patches and unpigmented under the white patches. This alternating colour pattern is irregular and asymmetrical. Animals with this pattern may include horses, dogs, birds, cats, pigs, and cattle, as well as snakes such as the ball python. Some animals also exhibit colouration of the irises of the eye that match the surrounding skin (blue eyes for pink skin, brown for dark). The underlying genetic cause is related to a condition known as leucism.

“In British English piebald (black and white) and skewbald (white and any colour other than black) are together known as coloured. In North American English, the term for this colouring pattern is pinto, with the specialized term “paint” referring specifically to a breed of horse with American Quarter Horse or Thoroughbred bloodlines in addition to being spotted, whereas pinto refers to a spotted horse of any breed. In American usage, horse enthusiasts usually do not use the term ‘piebald,’ but rather describe the colour shade of a pinto literally with terms such as “black and white” for a piebald, ‘brown and white,’ or ‘bay and white,’ for skewbalds, or color-specific modifiers such as ‘bay pinto,’ ‘sorrel pinto,’ ‘buckskin pinto,’ and such.

“Genetically, a piebald horse begins with a black base coat colour, and then the horse also has an allele for one of three basic spotting patterns overlaying the base colour. The most common coloured spotting pattern is called tobiano, and is a dominant gene. Tobiano creates spots that are large and rounded, usually with a somewhat vertical orientation, with white that usually crosses the back of the horse, white on the legs, with the head mostly dark.” [Piebald]

3 Responses to From Where Does That Word Come?