Early History of the English Language

I thought I might put all those years of education to use by adding a series of posts on English Language and Literature. I am going back to the beginning and working my way forward. I hope you enjoy the posts and learn something new. After all, any day we learn something new is a good day.

The Teutonic branch of the Indo-European languages marks the early English language. The common ancestor of all of the languages in this branch is called Proto-Germanic—also known as Common Germanic—which was spoken in approximately the middle-1st millennium BC in Iron Age Northern Europe. Proto-Germanic, along with all of its descendants, is characterized by a number of unique linguistic features, most famously the consonant change known as Grimm’s law. Early varieties of Germanic enter history with the Germanic tribes moving south from Northern Europe in the 2nd century BC, to settle in the area of today’s northern Germany and southern Denmark.(Germanic Languages) We know little of the early Indo-Europeans, but we assume they arrived in Britain from the Tigris-Euphrates Valley.

http://www.stone-circles.org.uk/stone/
belasknap.htm A superb and stunning example of a ‘Severn-Cotswold’ chambered long barrow, the partially restored Belas Knap is reached after a long 800 metre climb.

The Neolithic people known as the long-barrow men followed the first invaders of Britain, who were similar to the “Eskimo” race. The “long barrow” men received their name from prehistoric monuments, which are rectangular or trapezoidal tumuli or earth mounds that sport several bodies within the tombs. Long barrows are also typical for several Celtic, Slavic, and Baltic cultures of the 1st millennium A.D. We customarily refers to the long barrow men as the Picts. (“History of English Literature: Part 1 – Early Saxon Through Milton,” Hymarx Outline Series, Boston, MA)

The long barrow men were followed by the round barrow men. Again, the name comes from the burial crypts used by the society, which were likely an Aryan people who we believe introduced the Celtic tongue.At its simplest, a round barrow is a hemispherical mound of earth and/or stone raised over a burial placed in the middle. Beyond this there are numerous variations which may employ surrounding ditches, stone kerbs or flat berms between ditch and mound. The central burial may be placed a stone chamber or cist or in a cut grave. Both intact inhumations and cremations placed in vessels can be found. Many round barrows attract surrounding satellite burials or later ones inserted into the mound itself. In some cases these occur hundreds or even thousands of years after the original barrow was built and were placed by entirely different cultures. (Round Barrows)

The round barrows in the UK can be dated to the Early Bronze Age, although we do have examples which are Neolithic. Even Roman, Viking, and Saxon societies used round barrows as part of their customs.

An article I found most interesting is based on this abstract from Nature: International Weekly Journal of Science: The Modern Londoner and Long Barrow Man

AT a meeting of the Royal Anthropological Institute held on March 8, Prof. F. G. Parsons read a paper on “The Modern Londoner and Long Barrow Man,” in which he discussed a claim made by Dr. Macdonell and Prof. Karl Pearson that the head shape of Londoners of the seventeenth and eighteenth centuries was more like that of the Long Barrow men than of any other race. Prof. Parsons, however, showed, by a detailed comparison of contours obtained from thirty male London skulls of the seventeenth and eighteenth centuries dug up in the Clare Market district, and corresponding with the averages obtained by Dr. Macdonell from his London skulls found at Whitechapel and Moorfields, with those of twenty Long Barrow skulls from Yorkshire, Wiltshire, ani Gloucestershire, that in the head measurements, in the depth of the orbital openings, in the length of the face, and in other anatomical details the London skulls differed markedly from those of the Long Barrow men. On the other hand, in every respect these London skulls corresponded more closely with those of Anglo-Saxons than with those of Long Barrow men. Occasionally a Londoner might reproduce the Long Barrow type, as in the case of the notorious thief Jonathan Wild, but these cases were so rare as not to affect the average contour.”

[What do you think of the abstract’s proposal? Add you comments below.]

The Romans arrived on British shores about 54 B.C. and held control of the island until 410 A.D. Surprisingly, the Roman conquest had little influence on the Celtic language. Internal strife claimed the land with the departure of the Romans. The Picts and Scots in Scotland and Ireland fought the Britons.

In 499, Vortigern, King of Britain, invited the Jutes to help him in repelling the Picts and the Scots. Hengist and Horsa came to the island. Hengist (or Hengest) and Horsa (or Hors) are figures of Anglo-Saxon history, which records the two as the Germanic brothers who led the Angle, Saxon, Frisian, and Jutish armies that conquered the first territories of Britain in the 5th century. Tradition lists Hengist  as the founder of the Kingdom of Kent. 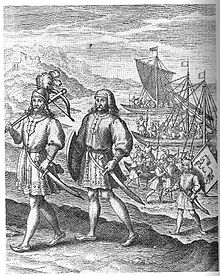 Hengist and Horsa arrived in Britain as mercenaries serving Vortigern, King of the Britons. This event is traditionally recognised as the beginning of the Anglo-Saxon invasion of Britain. Sources disagree about whether Hengist was the father or grandfather of Oisc of Kent and Octa of Kent, one of whom succeeded Hengist as king. In the Historia Brittonum, Hengist had an unnamed daughter (Historia Regum Britanniae first gave her name as Rowena), who seduced Vortigern, eventually leading to the Treachery of the Long Knives when Hengist’s men massacred the Britons at a peace accord. While the early sources indicate that Horsa died fighting the Britons, no details are provided about Hengist’s death until Geoffrey’s Historia, which states that Hengist was beheaded by Eldol, the British duke of Gloucester, and buried in an unlocated mound. (Hengist and Horsa)

These Teuton invaders split into three sections: the Angles, the Jutes, and the Saxons. The Angles settled in Northumbria (northern England and southeast Scotland) and central Mercia (the English Midlands). The Jutes were known to settle in Kent and the Isle of Wight. The Saxons were found in the Essex countries of the south. From these areas, four dialects developed: Northumbrian, Mercian, Kentish, and West Saxon. (“History of English Literature”)

None of these dialects were “literary” in character – no literary writing is claimed. However, as the tribes associated with other European civilizations, the languages took on more “standard” characteristics.

8 Responses to Early History of the English Language