Eccentrics of the Regency: Francis Seymour-Conway, 3rd Marquess of Hertford

Seymour-Conway was the son of Francis Seymour-Conway, 2nd Marquess of Hertford, by his second wife Isabella Anne Ingram, daughter of Charles Ingram, 9th Viscount of Irvine. 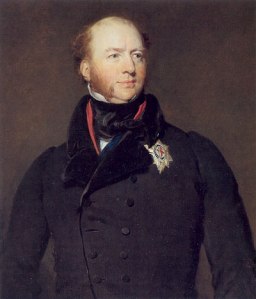 The Regency Rake is a popular character from romance novels. The Marquess of Hertford was a true Regency rake, one who preferred married women to the innocent maiden. Though 15 years younger than  the Prince Regent, Seymour-Conway quickly became on of Prince George’s intimates. He was nicknamed “Red Herrings” because of his red hair and whiskers. Known for his appetite for sensual pleasures, he was once described by a colleague as “a man without one redeeming quality in the multitude of his glaring, damning vices.” Toward the end of his life, a critic said of Seymour-Conway, “[He was] the debauched sensualist, the heartless roué, the gamester – he who never envinced a latent spark of virtue among the his glaring vices, revelling in crime even in his impotent old age and dotage.”

Lord Yarmouth sat as Member of Parliament for Oxford from 1797 to 1802, for Lisburn from 1802 to 1812, for Antrim from 1812 to 1818 and for Camelford  from 1820 to 1822. In March 1812 he was sworn of the Privy Council and appointed Vice-Chamberlain of the Household under Spencer Perceval. He continued in the post after Lord Liverpool became prime minister in May 1812 after Perceval’s assassination, but relinquished it in July of that year. The same year he was appointed Lord Warden of the Stannaries, a post he held until his death. He succeeded his father in the marquessate in 1822. The same year he was also made a Knight of the Garter and appointed Vice-Admiral of Suffolk, a post he retained until his death.

Lord Hertford was also a considerable art collector, as were his son and grandson; many of his pictures are in the Wallace Collection which they founded.

Lord Hertford married Maria Emilia Fagnani, reputedly the illegitimate daughter of the 4th Duke of Queensberry and a married Italian aristocrat, the Marchesa Fagnani, on 18 May 1798. They had three children:

Lord Hertford was the prototype for the characters of the Marquess of Monmouth in Benjamin Disraeli’s 1844 novel, Coningsby, and the Marquess of Steyne in William Makepeace Thackeray’s 1848 novel, Vanity Fair, because, like Steyne, “Lord Hertford kept a secret garconniere, where, according to Harriette Wilson [a celebrated Regency era courtesan], who was a regular visitor, he would entertain ‘any fair lady who would honour him with a visit incognita, after his servants should have prepared a most delicious supper and retired to rest.'”   In his last years he was said to live with a retinue of prostitutes. Charles Greville described him as broken with infirmities and unable to speak due to paralysis of the tongue, and claimed ” there has been, so far as I know, no such example of undisguised debauchery.” He died in March 1842, aged 64, and was succeeded by his eldest son, Richard. The Marchioness of Hertford died in March 1856, aged 84.

Harriette Wilson surprisingly respected Seymour-Conway. While she “trashed” many of the Regency most well-known figures in her memoirs, Publish and Be Damn’d, Harriette said of Seymour-Conway, “[H]e is a man possessing more general knowledge than anyone I know. His Lordship appears to be au fait on every subject one can possibly imagine. Talk to him of drawing, or horse-riding; painting or cock-fighting; rhyming, cooking, or fencing; profligacy or morals; religion of whatever creed; languages living or dead; claret, or burgundy; champagne or black strap; furnishing houses, or riding hobbies; the flavour of venison, or breeding poll-parrots, and you might see he had served his apprenticeship to every one of them.”

Lord Hertford’s legacy is marred by his dissipation and his wild extravagance. His scandalous private life caused others to overlook his intelligence and his taste, especially in art. Seymour-Conway was a mix of wasteful recklessness and grace and style.