Resurrectionists in the UK – Supplying Bodies for the Teaching Hospitals, Part I – the Release of “The Mysterious Death of Mr. Darcy”

In THE MYSTERIOUS DEATH OF MR. DARCY, my research brought me to the value of the human body to teaching hospitals. Below, you will find part one of an interesting look at the “business” and the history of recovering bodies for medical research.

Resurrectionists (1847), by Hablot Knight Browne. This illustration accompanies an account of John Holmes and Peter Williams who, for unearthing cadavers in 1777, were publicly whipped from Holborn to St Giles. ~ https://en.wikipedia.org/wiki/Resurrectionists_in_the_United_Kingdom#/media/File:Resurrectionists_by_phiz.png

Employed as anatomists during the 18th and 19th Centuries, resurrectionists disinterred the bodies of recently deceased individuals. Then they delivered said bodies to their clients, generally the medical schools, for those schools were allotted fifty or less bodies to study, when they customarily required 5 times as many.

In 1752, Parliament created what was called the Murder Act. “The new law allowed judges to substitute gibbeting with dissection—a fate generally viewed with horror—and significantly increased the number of bodies anatomists could legally access. But it proved insufficient to meet the needs of the hospitals and teaching centres that opened during the 18th century. Corpses and their component parts became a commodity, but although the practice of disinterment was hated by the general public, bodies were not legally anyone’s property. The role of the resurrectionists therefore occupied a legal grey area.

Nevertheless, resurrectionists caught plying their trade ran the risk of physical attack. Measures taken to stop them included the use of increased security at graveyards. Night watches patrolled grave sites, the rich placed their dead in secure coffins, and physical barriers such as mortsafes and heavy stone slabs made extraction more difficult. Body snatchers were not the only people to come under attack; in the public’s view, the 1752 Act made anatomists agents of the law, enforcers of the death penalty. Riots at execution sites, wherefrom anatomists collected legal corpses, were commonplace.

“Matters came to a head following the Burke and Hare murders of 1828. Parliament responded with the 1828 Select Committee on anatomy, whose report emphasised the importance of anatomical science and recommended that the bodies of paupers be given over to anatomy. Following the discovery in 1831 of Burking in London, a bill submitted by Henry Warburton, author of the Select Committee’s report, was debated in Parliament. Although it did not make body snatching illegal, the resulting Act of Parliament effectively put an end to the work of the resurrectionists by allowing anatomists access to the workhouse dead.” [Resurrectionists in the United Kingdom]

Henry VIII and the Barber Surgeons (1543), by Hans Holbein the Younger. Anatomical research on human cadavers was legalised in England in 1540. ~ https://en.wikipedia.org/wiki/Resurrectionists_in_the_United_Kingdom#/media/File:Henry_VIII_and_the_Barber_Surgeons,_by_Hans_Holbein_the_Younger,_Richard_Greenbury,_and_others.jpg

1506 – King James IV of Scotland presented the Barber-Surgeons of Edinburgh the rigt to dissect “bodies of certain executed criminals.”

1564 – Elizabeth I granted the College of Physicians the right to anatomise four felons annually.

1630 – 1685 – During the reign of Charles II the number was raised to  six felons each year. Elizabeth I granted the College of Physicians the right to anatomise four felons annually in 1564.

1694 – Edinburgh permitted anatomists to dissect corpses of those found dead in the streets, as well as the bodies of those dying a violent death and whose body no one claimed.

Suicide victims were given over, as were infants who had died while being born and also the unclaimed bodies of abandoned children. But even though they were supported by the common law, anatomists occasionally found it difficult to collect what was granted to them; fueled by resentment of how readily the death penalty was used, and imbued with superstitious beliefs, crowds sometimes sought to keep the bodies of executed felons away from the authorities. Riots at execution sites were commonplace. Worried about possible disorder, in 1749 the Sheriff of London ignored the surgeons and gave the dead to their relatives.

While the Murder Act gave anatomists statutory access to many more cadavers than were previously available, it proved insufficient. Attempting to bolster the supply, some surgeons offered money to pay the prison expenses and funeral clothing costs of condemned prisoners, while bribes were paid to officials present at the gallows, sometimes leading to an unfortunate situation in which corpses not legally given over for dissection were taken anyway.

THE MYSTERIOUS DEATH OF MR. DARCY: A PRIDE AND PREJUDICE MYSTERY

A THRILLING STORY OF MURDER AND BETRAYAL FILLED WITH THE SCANDAL, WIT AND INTRIGUE CHARACTERISTIC OF AUSTEN’S CLASSIC NOVELS

Fitzwilliam Darcy is devastated. The joy of his recent wedding has been cut short by the news of the sudden death of his father’s beloved cousin, Samuel Darcy. Elizabeth and Darcy travel to Dorset, a popular Regency resort area, to pay their respects to the well-traveled and eccentric Samuel. But this is no summer holiday. Danger bubbles beneath Dorset’s peaceful surface as strange and foreboding events begin to occur. Several of Samuel’s ancient treasures go missing, and then his body itself disappears. As Darcy and Elizabeth investigate this mystery and unravel its tangled ties to the haunting legends of Dark Dorset, the legendary couple’s love is put to the test when sinister forces strike close to home. Some secrets should remain secrets, but Darcy will do all he can to find answers—even if it means meeting his own end in the damp depths of a newly dug grave.

With malicious villains, dramatic revelations and heroic gestures, The Mysterious Death of Mr. Darcy will keep Austen fans turning the pages right up until its dramatic conclusion. 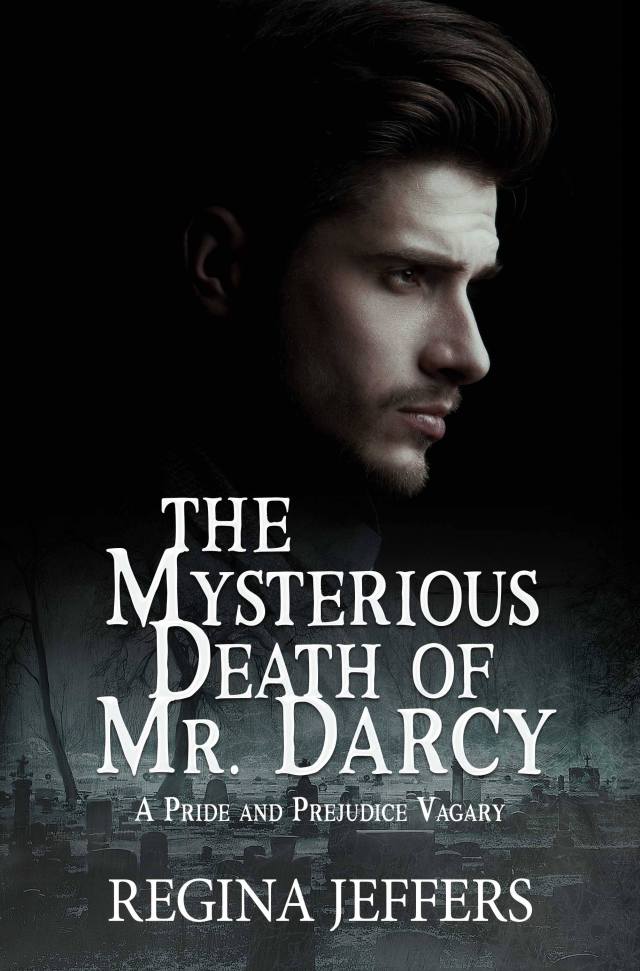