How Did Smith Brothers Cough Drops Get Its Name?

William (Trade) and Andrew (Mark) were the sons of James Smith, who moved his family from St. Armand, Quebec, to Poughkeepsie, New York in 1847. A carpenter by trade, Smith meant to open a restaurant, Smith’s Dining Saloon, in his new home. He was also known for his candy making.

Shortly after Smith’s moving to New York, a journeyman shared the formula for an effective cough candy with the elder Smith. Being an astute businessman, Smith saw an opportunity to expand his calling. He mixed up a batch of the cough drops upon his kitchen stove. He sold them from his dining saloon, and the word soon spread of the effects of the medication among those in the Poughkeepsie area. A newspaper of the time displays an advertisement for the cough drops, saying “all afflicted with hoarseness, coughs, or colds should test its virtues.”

Soon William and Andrew sold the drops upon the streets of Poughkeepsie. “The Smith Brothers” were often sought out for the “cough candy.” The operation moved from the Smith’s kitchen to the restaurant and later to a loft building. When the elder Smith died in 1866, his sons carried on the business under the name Smith Brothers. 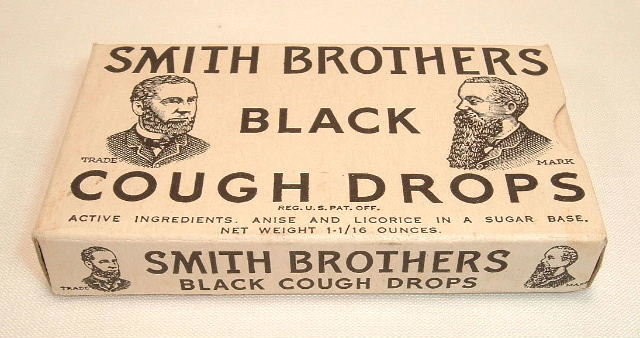 When imitators started flooding the market with similar names, the Smith Brothers decided to trademark their product with their own images. The drops were originally sold from large glass bowls place on store counters. Customers put the drops in envelopes to be taken home. The word “Trade” was under William’s picture, and the word “Mark” under Andrew’s. Therefore, the two men were often referred to as “Trade” and “Mark,” rather than by their real names.

In 1872, Smith Brothers developed one of the first factory-filled packages on the market. They trademarked images of the two men was transferred to the individual packages. Surprisingly, production increased from 5 pounds to 5 tons per day. 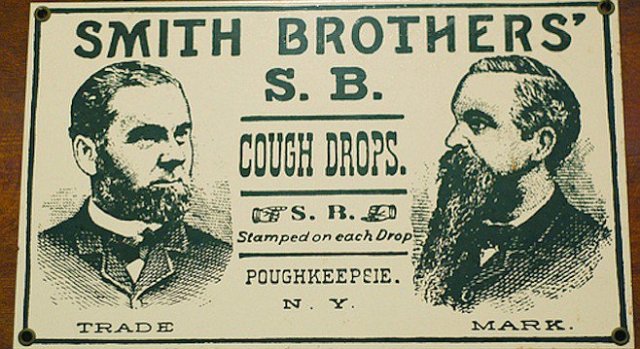 Trade and Mark hold the world record for the number of times their likenesses have been reproduced.

2 Responses to How Did Smith Brothers Cough Drops Get Its Name?