Earlier, Elaine Owen shared a post with us on people with disabilities during Jane Austen’s lifetime. Today, she tells us something of George Austen, the brother of Jane Austen who did not live with the family because of his disabilities. Welcome, Elaine!

Today I’d like to tell you about George Austen, the brother you never knew Jane had.

George Austen, Jane Austen’s second oldest brother, was born in 1766, and from an early age he displayed some sort of disability that made him noticeably different from other children. We don’t know exactly what this disability was. We do know that he had “fits” (possibly seizures) at three and four years of age. We also know that when he was six years old his uncle and godfather, Tysoe Hancock, wrote that George, “must be provided for without the least hopes of his being able to assist himself.” George’s father famously said of him, “We have this comfort, he cannot be a bad or a wicked child,” indicating that there was some sort of mental impairment. Whatever his disability was, it was considered unlikely to improve and was the cause of some distress for his parents.

Sometime after the age of six, George was sent away to live with the Cullum family in the village of Monk Sherborne, some thirty miles away. He never lived with his own family again. The Austens paid for his support, but he spent the rest of his life on a farm with this other family, receiving few or no visits from his parents and siblings. His name gradually disappeared from the family correspondence, and Jane never mentioned him once in any of her surviving letters. It is as though he never existed. In fact when George’s mother died she did not even mention him in her will. And when George himself died of natural causes at the respectable age of seventy-one, no family members attended his funeral.

Those are the bare facts of George’s life, and at first reading they are heart breaking. To modern readers, two hundred years later and a culture away, it looks like the Austen family wrote off their disabled family member and completely forgot about him. Many scholars have written about the supposedly heartless treatment George received at his family’s hands.

I don’t pretend to know what the Austens were thinking, nor will I say that I can defend their decisions for him. But there are other factors to consider when judging how a family in a different time and place chose to care for their disabled child.

First, the Austens knew the Cullum family. They didn’t just send George off with complete strangers. The Cullums had already been caring for George’s uncle, Thomas Leigh, who likewise had some kind of mental disability. The Austens must have trusted the Cullum family to care for George just as they cared for Thomas Leigh. And with seven other children in the Austen home, perhaps they felt that George would be best off in an environment without so many demands on the caregiver’s time and attention.

Secondly, parents in that era and society routinely sent their children away for an education at an early age. Jane herself went to Oxford, some seventy miles away from her family, when she was just eight years old. So sending George away, even when he was quite young, would not have been remarkable. On the contrary, it may have been an attempt to give him as “normal” a life as possible compared to his fully-abled siblings. It’s even possible that they thought he would be able to return to them one day.

But what about the rest of his life? Why didn’t George ever come home? And why would the family not want to visit their son and brother? How could they cut him out of their lives without a second thought? I have a theory about this based on my own experiences with not just my daughter, but other children with disabilities. It’s just a theory but I think it’s plausible.

I suspect that once George had settled in with the Cullum family, after he got over the adjustment period and was in a routine, he was content and happy in his new environment. He may have been so content, so settled into his new life, that having visits from his family was upsetting to him. If George recognized his parents but was not able to go home with them for some reason, then a visit from his parents might have caused him tremendous stress. In that case the Austens may have decided that it was best for George if they kept their distance. If that is what happened, then it may have been a subject too painful for his parents to write about even to close family members.

But what about George and his mother’s will? Why wouldn’t she mention him there? I suspect Mrs. Austen left George out of her will for the simple reason that he was not competent to handle money. She may have instructed her other children to be sure to care for their brother George  after her death—and that is exactly what Edward, the closest sibling to George in age, did.

Of course, my theory might be wrong. It’s possible that the Austens decided George was too much for them to handle and just wrote him off, feeling that they had fulfilled their obligation by providing for his care and owed him nothing more. But it does seem odd that the Austen family, whose correspondence shows such strong bonds of affection and concern amongst themselves, would behave so heartlessly to one of their own. We’ll never know for sure, but I hope people will at least consider other explanations for how the Austen family treated their son and brother, George Austen.

Meet Elaine Owen: Elaine Owen was born in Seattle, Washington and was a precocious reader from a young age. She read Pride and Prejudice for the first time in ninth grade, causing speechless delight for her English teacher when she used it for an oral book report. She practiced writing in various forms throughout her teen years, writing stories with her friends and being chief editor of the high school yearbook. She moved to Delaware when she married.

In 1996 she won a one year contract to write guest editorials in the Sunday edition of The News Journal in Wilmington, Delaware, and she continued her writing habit in political discussion groups and occasional forays into fiction.

In 2014 she began to write Pride and Prejudice fan fiction and decided to publish her works herself to see if she might possibly sell a few copies. Thousands of books later, the results have been beyond her wildest hopes, and she plans to continue writing fiction for the foreseeable future.

When she’s not writing her next great novel, Elaine relaxes by working full time, raising two children, volunteering in her church, and practicing martial arts. She can be contacted at elaineowen@writeme.com. Look for her on Facebook! 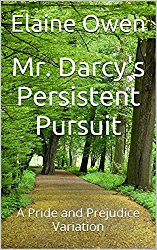 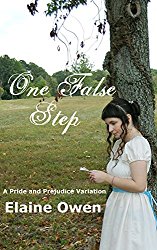