Posted on February 25, 2016 by reginajeffers 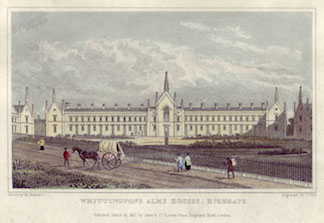 St Michael Paternoster Royal is a church in the London proper. The original building, which was first recorded in the 13th century, was destroyed in the Great Fire in 1666. The church was rebuilt under the aegis of Sir Christopher Wren. However St Michael’s was severely damaged during the London in WWII. It was restored between 1966 and 1968. In 1423 Richard “Dick” Whittington, the fabled Lord Mayor of London, was buried within its precincts; although the tomb is now lost. The earliest record of St Michael’s is as St Michael of Paternosterchierch and is dated 1219. Richard Whittington, four time Lord Mayor of London, founded the College of St Spirit and St Mary within the church, so that St Michael’s became a collegiate church, i.e. it was administered by a  college of priests, in this case five, instead of a rector. It was commonly known as Whittington’s College, or Whittington College. Adjacent to the Church, Whittington also founded an almshouse. The College was dissolved by Edward VI in 1548; but was re-established in a new entity a few years later under Queen Mary. The title seems in any case to have persisted for the church, giving the names of College Street, and College Hill. The almshouses moved to Highgate in 1808 and later to their present location in East Grinstead in 1966. (St Michael Paternoster Royal)

From British History Online, we learn, “The church of St. Michael Paternoster Royal was the parish church of the wealthy Richard Whittington, and therefore had a special claim on him. At the beginning of the fifteenth century it needed enlarging, and was also in a ruinous state, so that he determined to rebuild it entirely, and in 1411 began the work by adding a piece of ground to the site. His idea was to make the new church collegiate, but before he could complete his project he died early in 1423. His executors, however, with the consent of the king  and the archbishop of Canterbury, erected there in 1424 in honour of the Holy Ghost and St. Mary a perpetual college of five secular priests, of whom one was to be master, two clerks and four choristers. William Brooke, the rector of St. Michael’s, was made master, and it was ordained that henceforth the office of master should be held to include that of rector. When a vacancy occurred one of their number was to be chosen by the chaplains and presented by the wardens of the Mercers’ Company to the prior and chapter of Christchurch, Canterbury, who as patrons of the rectory were to present him to the bishop for institution; vacancies among the chaplains were to be filled by the master and senior chaplains; the clerks and choristers were to be appointed and were removable by the master and chaplains, and when past work were to be supported in the Whittington Almshouse; all the members of the college were to live in a house built by Whittington at the east end of the church; the master was to have a salary of 10 marks besides the oblations of the church, each chaplain 11 marks, the first clerk 8 marks, the second 100s., the choristers 5 marks each, and out of this they were to provide their food and clothing, but the cook was paid out of the college funds; the dress of the chaplains was to be of one style and colour; residence was obligatory, no chaplain being permitted to be absent for more than twenty days in the year, and then for good cause; the college was to have a common seal which was to be kept with the charters in the common chest; the goods of the college were not to be alienated by the master and chaplains except for urgent necessity; an inquiry into debts was to be made at the general chapter held annually; the supervision of the college was vested, after the decease of the executors, in the mayor of London and the wardens of the Mercers’ Company.” 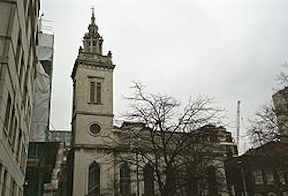 Whittington College is a Gothic almshouse built around three sides of a quadrangle. The chapel is the center point of the structure. The Whittington charity called College Hill home, but eventually moved to the another site near the Whittington Stone in 1822. “St Michael’s is rectangular in plan, with only the west front on College Hill being slightly out of true. Before the Second World War the south front was hemmed in by buildings. Following bomb damage, these buildings were cleared and Whittington Garden laid out on their site, so that St Michael’s main façade is now on the south, along Upper Thames Street. The south front is faced with Portland stone and has six round-headed windows with cherub keystones. The less prominent north and east fronts are of brick. The roof is balustraded.

“Entrance is through the tower in the southwest corner. This has a round-headed window at the lowest level, then a circular window, then a square-headed belfry window. At the top is a pierced parapet with square urns on the corners. The stone spire was designed by Nicholas Hawksmoor and is similar to those of St Stephen Walbrook, St James Garlichythe and, to a lesser extent, the west towers of St Paul’s Cathedral. It is an open octagon formed by eight Ionic columns, each with its own entablature and topped by an urn. Above this is another, smaller, octagon with another eight columns with urns. Above the second octagon is a tiny dome surmounted by a pennant vane. The height of the tower and steeple is 128 ft.” (St Michael Paternoster Royal)

Regina Jeffers is the award-winning author of Austenesque, Regency and historical romantic suspense.
View all posts by reginajeffers →
This entry was posted in Uncategorized. Bookmark the permalink.
%d bloggers like this: