Are You Ready for the Onslaught of Holiday Movies?

Posted on December 7, 2015 by reginajeffers

Since the onset of film, a little over a century prior, Christmas has been employed as plot device for some of our most endearing films, as well as those not so engaging. Today, we have channels, such as the Hallmark Channel, on television, which run countless made-for-TV films “celebrating” Christmas.

Ironically, none of the traditional Christmas classics tell the story of Jesus’s birth. Instead, they speak to the values taught by the Christian faith. As with the morality plays of the Medieval and early Tudor times, these “interludes” are a type of allegory in which the protagonist is met by personifications of various moral attributes, who try to prompt him to choose a Godly life (most noble of human qualities) over one of evil or of dispensation. 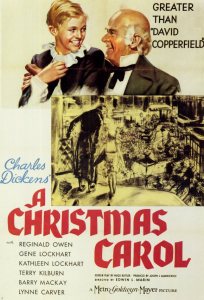 One of the most popular of holiday films are those based on Charles Dickens’s A Christmas Carol. There have been more than 20 film versions of the Victorian classic, and this does not take into consideration play productions, television, etc. Dickens’ story was first brought to film in 1938 with Reginald Owen playing Scrooge; however, most critics believe the 1957 version told a truer tale. Dickens’ tale has even seen the 1970 musical with Albert Finney and Kermit the Frog in The Muppet’s Christmas Carol. The value of family and of giving is the nucleus of most retellings. 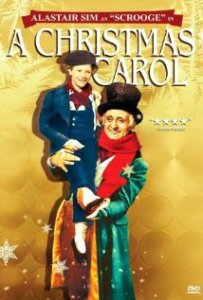 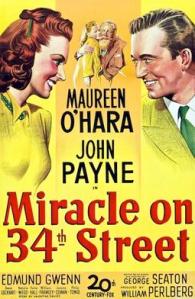 Miracle on 34th Street remains one of my favorites. The 1947 version of the film starred Edmund Gwen, Maureen O’Hara, Natalie Wood, and Gene Lockhart. (Note! Lockhart was also notably in the 1938 version of A Christmas Carol.) The film’s story line teaches us there is no place for negativity in the midst of joy and “miracles.” Ironically, the movie was not released during the winter months, but rather during July. Six months later, crowds still filled theatres, and Hollywood had learned the lesson of “Christmas” as a money-making draw. 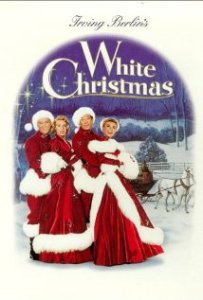 Another of my favorites is White Christmas. What can I say? I am a sucker for a movie musical. Needless to say, the film was designed to highlight Bing Crosby’s release of the Irving Berlin classic “White Christmas.” The song made its debut in the 1942 film Holiday Inn. White Christmas (1954) brought a group of WWII veterans together to honor the man had led them through the trials of battle and is a spectacular lesson on respect and responsibility. The only thing I “dislike” about the film is I spend the next month singing “Sisters.”  Just to mess with your mind, here are the lyrics so you might song along with me.

Sisters, sisters
There were never such devoted sisters
Never had to have a chaperon, no sir
I’m here to keep my eye on her
Caring, sharing
Every little thing that we are wearing
When a certain gentleman arrives from Rome
She wore the dress and I stayed home
All kinds of weather
We stick together
The same in the rain or sun
Two different faces
But in tight places
We think and we act as one… uh-huh
Those who’ve seen us
Know that not a thing could come between us
Many men have tried to split us up but no one can
Lord help the mister
Who comes between me and my sister
And lord help the sister who comes between me and my man
Sister
Sister
Sister don’t come between me and my man (Lyrics) 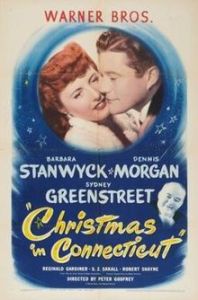 An old Hollywood screwball comedy, Christmas in Connecticut, speaks to us of the ways to nourish love with honesty. The film starred Barbara Stanwyck and Dennis Morgan and displays the typical “Happily Ever After” so sought by those who love the romance genre.

Likely the most popular of the Christmas films is Donna Reed’s and Jimmy Stewart’s It’s a Wonderful Life (1946). In reality, the film was not received well by film critics, saying the film was “too perfect” – sugary sweet to the point of being “sickening.” However, the advent of television brought new life to the film. The lesson of how one life can have a domino effect on the rest of the world rang true for those children of the Cold War era. Flickfilospher offers this criticism of the film: “An ordinary man sees the life of adventure and travel he hoped for constantly thwarted but eventually learns to love the pleasant life he does have. Cherish what you have, is the movie’s message. Count your blessings. Who could argue with those aphorisms? And that, maybe, is my problem with It’s a Wonderful Life: it’s too easy. Its two main characters — George Bailey (James Stewart: The Greatest Show on Earth) and Mr. Potter (Lionel Barrymore: You Can’t Take It with You) — are stereotypes, respectively, of the poor, eternally put-upon ordinary guy and the mean-spirited, rich old bastard. The conflicts the film sets up couldn’t be more black-and-white — and I’m not talking about the film stock.”

This is a list from Wikipedia of Holdiay-based films. I do not totally agree with some of the choices, but here they are just the same…

Babes in Toyland – 1961 – Disney adaptation of the Herbert operetta.
Beyond Tomorrow (Beyond Christmas) – 1940 -The first half of this fantasy film takes place on Christmas Eve as three old men befriend two strangers, a young man and woman, who return their wallets.
The Bishop’s Wife – 1947 – An angel helps a bishop rearrange his priorities during the Christmas season.
A Christmas Carol – 1938 – MGM’s adaptation of Charles Dickens’ classic story.
A Christmas Carol – 1951 – American title of British film Scrooge (see below).
Christmas Holiday – 1944 -A stranded soldier listens as a cabaret singer recounts a doomed marriage to a killer.
Christmas in Connecticut – 1945 – A columnist must entertain her boss and a returning war hero for the holidays. Remade for television in 1992.
Holiday Affair – 1949 – Romance blooms between a young widow and a sales clerk at Christmastime.
Holiday Inn – 1942 – Musicians prepare for a white Christmas at a cozy lodge.
I’ll Be Seeing You – 1944 – A war veteran finds romance with furloughed prisoner during the holidays.
It’s a Wonderful Life – 1946 – After attempting to commit suicide on Christmas Eve, a man is rescued by a guardian angel and shown what his hometown would be like had he never lived.
Scrooge – 1935 – Early film adaptation of Charles Dickens’ A Christmas Carol starring Sir Seymour Hicks.
Scrooge – 1951 – Dickens’ ghostly meditation on Christmas. This version of the story, with Alastair Sim as Ebenezer Scrooge, is universally regarded as the very best.
Miracle on 34th Street – 1947 – Macy’s Santa, with help from the U.S. Postal Service, restores a little girl’s faith. Remade for television in 1955, 1959, 1973.
The Shop Around the Corner – 1940 – Unbeknownst to each other, coworkers become romantic pen pals at Christmastime.
White Christmas – 1954 – As in Holiday Inn, musicians bring Irving Berlin’s lyrics to Vermont lodge. (The story is not a remake, however.)

Contemporary Christmas Classics
These are Christmas films released in the 1970s, 1980s, and 1990s.

A Christmas Story – 1983 – All Ralphie wants for Christmas is a Red Ryder BB gun.
All I Want for Christmas – 1991 – Two kids plot to reunite their estranged parents at Christmas.
Home Alone – 1990 – Kevin McCallister, an eight-year-old boy, is mistakenly left behind when his family flies to Paris for their Christmas vacation.
Home Alone 2: Lost in New York – 1992 – Kevin McCallister, now ten-years-old, mistakenly travels to New York City without his family on Christmas.
Jingle All the Way – 1996 – A Dad competes with others to find sold out hot toy for his son.
Mickey’s Christmas Carol – 1983 – Disney’s animated adaptation of Charles Dickens’ classic story.
Miracle on 34th Street – 1994 – Theatrical remake.
The Muppet Christmas Carol – 1992 – Jim Henson’s creations tackle Charles Dickens’ festive favorite.
National Lampoon’s Christmas Vacation – 1989 – The Griswold family plans turn to disaster, this time at Christmas. Followed by a made-for-TV sequel.
One Magic Christmas – 1985 – At Christmas time an angel shows a young mother the true meaning of the holiday.
The Nightmare Before Christmas – 1993 – Jack, a Halloween skeleton, discovers Christmas and attempts to hijack it.
The Santa Clause – 1994 – An ordinary man who accidentally causes Santa Claus to fall to his death from his roof on Christmas Eve must replace the “Jolly Old Elf”
Scrooge – 1970 – A musical adaptation of Dickens’ tale, starring Albert Finney in the title role.
Scrooged – 1988 – Modern, dark-humored interpretation of Dickens’ story, with Christmas spirits visiting a cynical, selfish TV exec, played by Bill Murray.

Modern Christmas Classics
These are Christmas films released in the 2000s and 2010s.

Angels Sing – 2013 – A man who as a child loved Christmas, but after a tragic accident, his holiday spirit was crushed. He needs to find his holiday spirit again, and meets a man named Nick, who gives him a gift that helps him find the joy of Christmas again.
Arthur Christmas – 2011 – Santa’s youngest son must deliver a bicycle to an overlooked girl before Christmas morning dawns. 3-D/CGI animated film.
A Christmas Carol – 2009 – Walt Disney Pictures/ImageMovers Digital performance capture film starring Jim Carrey.
Christmas with the Kranks – 2004 – When a suburban couple decide to forgo Christmas festivities, preferring to take a cruise to the Caribbean instead, their neighbours refuse to allow such Scrooge-like behaviour.
Deck the Halls – 2006 – Rival neighbors duke it out when one of them decides to light his house up so it can be seen from outer space
Elf – 2003 – A human who thinks he is an elf searches for his family in New York.
The Polar Express – 2004 – A magical train takes a boy and other children up to the north pole to meet Santa Claus.
The Santa Clause 2: The Mrs Clause – 2002 -Sequel to The Santa Clause; Santa must find a Mrs. Claus.
The Santa Clause 3: The Escape Clause – 2006 -Santa battles Jack Frost to keep his title.
Unaccompanied Minors – 2006 – Bored kids make up their own holidays while stuck in an airport after Christmas.

So, what are some of your favorite holiday-based films? Comment below.

10 Responses to Are You Ready for the Onslaught of Holiday Movies?