Posted on November 4, 2015 by reginajeffers 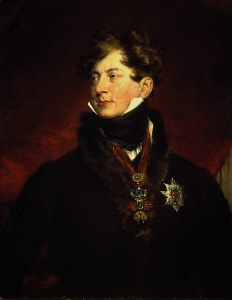 The last year of his reign and the passing of King George IV serves as the backdrop for the last book in my award-winning REALM series, A Touch of Emerald. Those of us who write books situated during the Regency era know something of Prince George and his many excesses and include “Prinny” in our plot lines, but few of us write much of his life during his actual reign. However, to write the conclusion to this series, it was necessary for me to learn more of George IV’s time on the throne. King George IV served as his father’s “Regent” (hence the name “Regency” period) from 1810 to 1820.

“George III (George William Frederick; 4 June 1738[a] – 29 January 1820) was King of Great Britain and Ireland from 25 October 1760 until the union of the two countries on 1 January 1801, after which he was King of the United Kingdom of Great Britain and Ireland until his death. He was concurrently Duke and prince-elector of Brunswick-Lüneburg (“Hanover”) in the Holy Roman Empire until his promotion to King of Hanover on 12 October 1814. He was the third British monarch of the House of Hanover, but unlike his two predecessors he was born in Britain, spoke English as his first language, and never visited Hanover.

“His life and reign, which were longer than any other British monarch before him, were marked by a series of military conflicts involving his kingdoms, much of the rest of Europe, and places farther afield in Africa, the Americas and Asia. In the later part of his life, George III had recurrent, and eventually permanent, mental illness. Although it has since been suggested that he had the blood disease porphyria, the cause of his illness remains unknown. After a final relapse in 1810, a regency was established, and George III’s eldest son, George, Prince of Wales, ruled as Prince Regent. On George III’s death, the Prince Regent succeeded his father as George IV.” [Wikipedia]

George IV reigned for a little over ten years (twenty years if one counts his time as Regent). Unlike his father, Prince George had extravagant tastes and was often in debt. The 1772 Royal Marriage Act said that descendants of George II could not marry without the consent of the reigning monarch. However, on 15 December 1785, the then Prince George married the twice-widowed Maria Anne Fitzherbert, who was a practicing Roman Catholic. Although considered a canonically sound marriage by the Catholic church, it was an invalid marriage according to the Royal Marriage Act. The 1701 Act of Settlement would make Prince George’s succession to the throne invalid if the marriage was not considered legitimate. Under the Act of Settlement, anyone who becomes a Roman Catholic or who marries one is disqualified from inheriting the throne.

Even so, George IV sired two children with Mrs. Fitzherbert. Much to his chagrin, George IV was forced to deny his marriage to lady. In return his debts were paid off. Next, a marriage to Caroline of Brunswick was arranged. The pair despised each other, and George IV would not permit his wife to attend his coronation in 1820. He tried upon multiple occasions to have his marriage annulled. Princess Charlotte was their only child. Caroline died in 1821 with claims of being poisoned.
Surprisingly, he did not support Catholic emancipation until 1829 when he joined the Duke of Wellington in the passing of the Catholic Relief Act. In 1822, George IV was the first monarch to visit Scotland since the reign of Charles II in the mid 1600s. Sir Walter Scott convinced King George to wear full Scottish regalia, which led to the revival of wearing the Scottish tartans that had been banned since the days of the Jacobite Rebellion.

George IV’s indulgences led to his being obese and suffering from gout. He was said to be mentally unstable in his later years. He died of a heart attack. Because his daughter Charlotte passed in 1817, George IV was succeeded upon the throne by his brother William IV. 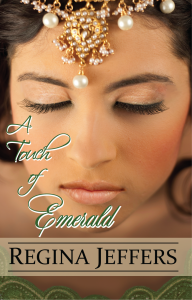 A Touch of Emerald: The Conclusion to the Realm Series
(Fiction/Historical; Historical Romance/Mystery/Adventure; Regency)

Four crazy Balochs. A Gypsy band. An Indian maiden. A cave with a maze of passages. A hero, not yet tested. And a missing emerald.

For nearly two decades, the Realm thwarted the efforts of all Shaheed Mir sent their way, but now the Baloch warlord is in England, and the tribal leader means to reclaim the fist-sized emerald he believes one of the Realm stole during their rescue of a girl upon whom Mir turned his men. Mir means to take his revenge on the Realm and the Indian girl’s child, Lady Sonalí Fowler.

Daniel Kerrington, Viscount Worthing, has loved Lady Sonalí since they were but children. Yet, when his father, the Earl of Linworth, objects to Sonalí’s bloodlines, Worthing thinks never to claim her. However, when danger arrives in the form of the Realm’s old enemy, Kerrington ignores all caution for the woman he loves.

Sonalí thought the conditions deplorable, especially for young ladies accustomed to fine homes and servants, and tears filled her eyes as the girls spread one of the blankets left behind by Mir’s men when they brought Maarah to this den upon the floor and settled down for some rest. Lady Amelia nestled Louisa close to her. Earlier Sonalí’s sister had all the girls frightened by the possibility of rats in the caves.

“There are no rats this far below ground,” Maarah assured as she cradled Louisa in her embrace. “If we were closer to the opening, perhaps, but…”

“If we were kept close to the opening, we could walk out into the moonlight.” Margaret Wellston declared.

“What if the bad men left a trail of bread crumbs to lead the rats to us?”

Her sister’s imagination proved as active as the duchess’s.

“I will make my bed before the door. If Mir’s men acted dishonorably, the rats will come upon me first.”

Although insensibility riddled the gypsy woman’s declaration, it proved the thing to relieve Louisa’s qualms; that is, until Sonalí thought to bed down near the opening also. Louisa insisted that Sonalí should permit Maarah to face the rats alone. Her younger sister’s show of entitlement embarrassed Sonalí, but she offered no words of apology until the child slept.

She left a candle lantern burning so the pale light would cut a thin line in the perfect blackness. Sonalí reasoned the light would calm the girls. Yet, it was she who required the flicker of hope the light provided. Despite her best efforts, the prospect of being caught in a tunnel with no means of escape reared its ugly head. She recalled the desperation she felt when the lantern her “Uncle James” thrust into her small hands went out during her escape from Mir’s men. Irrational fears filled her chest much as they did her younger sister.

“Lady Louisa did not mean to be cruel,” Sonalí said as she sat in weariness upon the earthen floor and handed Maarah a small apple.

The gypsy shrugged her shoulders as if Louisa’s remarks had little significance, but even in the poor light, Sonalí noted the wounded flick of annoyance upon the woman’s features.

“I am accustomed to the strange looks I receive from children,” Maarah said in acceptance.

“Are you?” Sonalí asked perceptively. “I fear I am not. Even as a duke’s daughter, I am often the source of curiosity among the ton. I cannot say I like it much.”

Maarah offered a wry twist of her lips.

“I never spoke of enjoying the experience, my lady.”

They sat in silence for several minutes.

“What are our chances of surviving this madness?’ Sonalí turned toward the woman. “It would seem to me there should be workers in the mines. Surely someone should stumble upon us.”

The gypsy stared off as if she meant not to answer, before providing an opinion.

“I held the same hopes at first. I’ve been with my husband’s former leader fer what I assume to be a fortnight. In the beginning, I thought Murhad would come for me, but Lord Mir’s conniving proved Jamot no match.”

“Your husband searches for you,” Sonalí assured. “He tracked Mir about England. I saw him once, and Lord Worthing and his father, the Earl of Linworth, spotted your husband upon my father’s land.”

The woman’s tone spoke of bitterness.

“Yet, his efforts prove for naught.”

“You should not abandon hope,” Sonalí encouraged. “Needless to say, you did not know this room for weeks, and I am certain your husband is checking each of your previous locations.” She paused before adding, “Please do not think me uncaring, but could you speak of what happened. In the time you were with Mir, did you learn anything of our enemy to aid in an escape?”

“Until two days prior, we moved from place to place,” Maarah explained. “At first, two men accompanied him, but one went on a mission for Lord Mir and never returned.”

“Lord Worthing captured Mir’s agent near my home. My father and his associates placed the man in custody.”

The gypsy weighed what Sonalí shared.

“Did Mir offer you an offense?”

Sonalí did not wish to think upon what Jamot’s wife suffered, but she needed to know.

The woman shook her head in denial.

“A hard slap. A shove. A twist of my arm. Yet, a woman doesn’t die from such treatment. I be fortunate. I didn’t earn the wrath the Baloch exacted upon others.”
Sonalí swallowed the question of whether Maarah knew something of Mir’s revenge against Sonalí’s mother.

“Do you hold an opinion on what we should do? Dare we attempt an escape?”

“I don’t know if it’s wise, but I fear if we don’t, once Mir possesses the emerald, he’ll permit his men to claim us,” Maarah said matter-of-factly.

A shiver of cold shot down Sonalí’s spine.

“The first night Mir left me here, I attempted to find my way out. All I discovered was the man Mir left in guard. If I didn’t scratch his face with me nails, leaving me mark, I believe he’d do me harm. Instead, he knocked me cold and returned me to this room. I’m certain next time he’ll not stop.”

“Again, I will ask: Is there no chance the workers will stumble upon us in the morning?”

“Lord Mir took great enjoyment in informing me the mine be closed. Men no longer work below ground.”

NOW FOR THE GIVEAWAY! I HAVE 2 eBOOK COPIES OF A TOUCH OF EMERALD AVAILABLE. LEAVE A COMMENT BELOW TO BE ELIGIBLE FOR THE GIVEAWAY. THE GIFTING WILL END AT MIDNIGHT EST SATURDAY, NOVEMBER 7, 2015.

Regina Jeffers is the award-winning author of Austenesque, Regency and historical romantic suspense.
View all posts by reginajeffers →
This entry was posted in British history, Great Britain, Living in the Regency, real life tales, Regency era, Victorian era and tagged A Touch of Emerald, George IV, the Georgian Era, the Realm series, the Regency Era. Bookmark the permalink.