The French epic arrived in England early on. Some historians believe that Chanson de Roland was sung at the Battle of Hastings. We have evidence of “chansons de geste” from the period, which serves even today. The chanson de geste, Old French for “song of heroic deeds,” are medieval narratives, a type of epic poem that appears at the dawn of French literature. Although they are considered “English” literature, many of the earliest manuscripts were written in French.

“The hero, named Horn, is the son of the king Aälof of Suddene (probably somewhere near Devon). Horn is orphaned after the Saracens kill his parents. He and twelve companions then set sail in a boat only to end up on the shores of Brittany, where he grows to manhood and falls in love with the king’s daughter Rigmel. There Horn defends the kingdom from invading Saracens, but the king banishes him to Ireland after Horn is wrongfully accused of trying to usurp the throne. In Ireland, Horn again proves his heroism and is offered the hand of the king’s daughter. Horn refuses it and after some time returns to Brittany to rescue and marry Rigmel. The story became the base for one of the earliest Middle English romances King Horn,” written around 1225 to 1250. (Wikipedia)

According to his legend, King Horn is the son of King Murry and Godchild, rulers in Suddene (the Isle of Man). The Paynim conquer the Suddenese and set Horn adrift in a boat with his companions. Eventually, Horn arrives in Almari’s country, where he takes up with the king’s daughter, Rimenild. Yet, before Horn and Rimenild can come together in marriage, he must prove his worth as a knight. Horn slays a hundred Saracens, but Almair learns of the alliance between his daughter and Horn, and he banishes Horn from the land for seven years.

After seven years, Horn receives news that Rimenild is to marry another. Dressed in disguise as a beggar, he returns for her. Remenild recognizes him for Horn wears the ring she presented him. He kills Fikenhild, the man who would claim Rimenild and finally claims the woman to wife.

Like most pieces of romantic verse of the period, King Horn is simple, direct, manly, completely untouched by the elaborate analysis and courtly code of the later romances. In expression and feeling, King Horn foreshadows the popular ballads and was, in fact, reworked into ballad form at a later date. [History of English Literature: Part I – Early Saxon Through Milton, Hymarx Outline Series, Student Online Company, Boston, MA]

We also know something of Bevis of Hampton from the period. Bevis is the son of Guy, Count of Hampton (Southhampton) and his wife, a daughter of the King of Scotalnd. The Countess of Hampton asks a former suitor to kill her husband. The plot knows success, and the countess marries her co-conspirator, Doon. Although only 10 years of age, Bevis threatens future retribution for his father’s death. The boy’s mother plans to kill him also, but the child’s tutor saves him by selling the bod to pirates. Bevis reaches the court of King Hermin. While dwelling with Hermin, Bevis defeats Ascapart, woos the Hermin’s daughter, Josiane, makes a journey to King Bradmond of Damascus where he is imprisoned for several years. Eventually, Bevis returns to Hampton to kill his stepfather. Even so, Bevis is driven from his home and separated from Josiane. The story details his death and the rise of his two sons to power.

The oldest extant version of Boeve de Haumtone dates from the first half of the 13th Century. It is some 3850 verses written in alexandrines, which is a line of poetic meter comprised of 12 syllables. 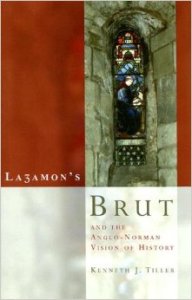 Layamon’s Brut and the Anglo-Norman Vision of History
http://www.amazon.co.uk

Laymon’s Brut is a rimed chronicle of the history of Britain. Written by Layamon, a priest well renowned in the early 1200s, “Brut” is in Middle English and alliteration. In the “Brut,” we find “The Passing of Arthur,” which tells of Modred’s treachery. Modred was Arthur’s nephew, but he plots against Arthur.

The story goes that Modred assembles 60,000 men to fight Arthur so Modred might claim the throne. This takes place at Whitsand on the French coast. During the battle, Arthur’s other nephew, Gawain is slain. Arthur laments Gawain’s death and discloses his earlier dream of foreboding determining Gawain’s passing.

Thinking themselves doomed by the Fates, Modred and his men flee to London. Modred goes to Winchester, from where he manages to escape to Hamtone (Southhampton) and to steal ships for his retreat. Merlin prophesies that the earth shall swallow Modred.

Thinking she lost her husband, Wenhaver [Guinevere], Arthur’s queen, departs Eouwerwic [Evorwic or York] to go to Caerleon, where she will become a nun.

Modred manages to amass a new army, and he meets Arthur’s forces at Camelford, near the River Tambre. Modred is killed and Arthur severely wounded. Over 200,000 men lose their lives in the battle. On his death bed, Arthur presents his kingdom to Cador’s son, Constantine. Arthur will arrive in the heavenly Avalon, where he will be restored to health and dwell with fellow Brutten [Britains].

In the tale, the body of the wounded Arthur is borne away in a boat by two women. The women are wondrously clad [“wunderliche idihte”], and they bear Arthur across the river to Avalon.