A Birthday Salute to Alan Rickman

Posted on February 20, 2015 by reginajeffers 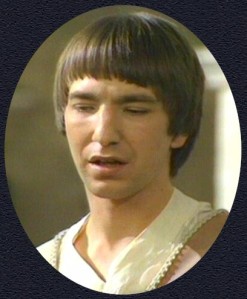 At the beginning of his career, Rickman played Tybalt in a 1978 TV movie of “Romeo and Juliet”

Tomorrow, February 21, is Alan Rickman’s birthday. He will be 68 years of age.

Bio (via imdb.com) Alan Rickman was born on a council estate in Acton, West London, to Margaret Doreen Rose (Bartlett) and Bernard Rickman, who worked at a factory. He has English, Irish, and Welsh ancestry. Alan has an older brother David, a younger brother Michael and a younger sister Sheila. When Alan was 8 years old, his father died. He attended Latymer Upper School on a scholarship. He studied Graphic Design at Chelsea College of Art and Design, where he met Rima Horton, who would later become his life partner. After three years at Chelsea College, Rickman did graduate studies at the Royal College of Art. He opened a successful graphics design business, Graphiti, with friends and ran it for several years before his love of theatre led him to seek an audition with the Royal Academy of Dramatic Art (RADA). At the relatively late age of 26, Rickman received a scholarship to RADA, which started a professional acting career that has lasted nearly 40 years, with no signs of stopping, a career which has spanned stage, screen and television and has lapped over into directing, as well.

Rickman first came to the attention of American audiences as “Vicomte de Valmont” in “Les Liaisons Dangereuses” on Broadway in 1987. He was nominated for a Tony Award for his performance in the role. Denied the role in the film version of the show, Rickman instead made his first movie appearance opposite Bruce Willis in Die Hard (1988) as the villain, “Hans Gruber.” Rickman’s take on the urbane villain set the standard for screen villains for decades to come. Though often cited as being a master of playing villains, Rickman has actually played a wide variety of characters, such as the romantic cello-playing ghost “Jamie” in Anthony Minghella’s Truly Madly Deeply (1990) and the noble Colonel Brandon of Sense and Sensibility (1995). He’s treated audiences to his comedic abilities with films like Dogma (1999), Galaxy Quest (1999) and The Hitchhiker’s Guide to the Galaxy (2005), and roles like “Dr. Alfred Blalock” in Something the Lord Made (2004) and “Alex Hughes” in Snow Cake (2006), showcase his ability to play ordinary men in extraordinary situations. Rickman even conquered the daunting task of singing a part in a Stephen Sondheim musical as he took on the part of “Judge Turpin” in the movie adaptation of Sweeney Todd: The Demon Barber of Fleet Street (2007).

In 2001, Rickman introduced himself to a whole new, and younger, generation of fans by taking on the role of “Severus Snape” in the movie versions of J.K. Rowling’s Harry Potter and the Sorcerer’s Stone (2001). He has continued to play the role through the eighth and last movie Harry Potter and the Deathly Hallows: Part 2 (2011). 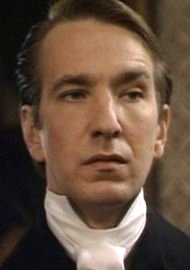 In 1982, Rickman portrayed Obadiah Slope in “The Barchester Chronicles.”

In 1990, Rickman played Elliott Marston in “Quigley Down Under.”

(1994) Rickman starred in a biography of the eighteenth century Viennese physician, Franz Anton Mesmer, who used unorthodox healing practices based on his theory of “animal magnetism.”

In 1991, Rickman took on the role of the vile Sheriff George of Nottingham in “Robin Hood: Prince of Thieves.”

Rickman took on the role of Colonel Brandon in 1995’s “Sense and Sensibility.”

Rickman has been Severus Snape in the Harry Potter series of films.

Do you have a favorite Alan Rickman film or tidbit to share? Add it to the comments below.

Regina Jeffers is the award-winning author of Austenesque, Regency and contemporary novels.
View all posts by reginajeffers →
This entry was posted in acting and tagged Alan Rickman, film. Bookmark the permalink.

20 Responses to A Birthday Salute to Alan Rickman