Purchasing Commissions During the Napoleonic Wars

We often read of a young gentleman purchasing a commission in either the militia or the regulars during the Regency era, but did conditions exist when a commission could not be secured? The answer is “Yes,” but there were rules and exceptions.

Not all regiments were open to purchase of rank!

“The RMA had been founded in 1741 at Woolwich to train gentlemen cadets for the Royal Artillery and Royal Engineers, and later for the Royal Corps of Signals and some for the Royal Tank Corps. It remained there until it was closed on mobilisation in 1939.

“The RMC began in 1800 as a school for staff officers which later became the Staff College, Camberley. A Junior Department was formed in 1802, to train gentlemen cadets as officers of the Line. A new college was built at Sandhurst, into which the cadets moved in 1812. After 1860, the RMC succeeded the East India Company’s Military Seminary as the establishment where most officers of the Indian Army were trained. Following the abolition of the purchase system in 1870, attendance at Sandhurst became the usual route to a commission. The college was enlarged in 1912, when New College was built.”

The purchasing of an officer commission in the British Army was a common practice throughout British history. Originally, the commission served as a cash bond guaranteeing the man’s good behavior, and it was forfeited if he acted with cowardice, gross misbehavior, or deserted his position. The practice began as early as the reign of Charles II and continued until it was officially abolished on 1 November 1871 by the Cardwell Reforms.

Commissions in cavalry and infantry regiments were the only ones available, and officer ranks could only be purchased up to the rank of colonel. Those who graduated from a course at the Royal Military Academy at Woolrich were presented commissions in the Royal Engineers and the Royal Artillery. These men were subsequently promoted by seniority. This was a means for those of the middle class or the trade class to enter the “gentlemen ranks” as officers, but they were still shunned by many as being “not quite gentlemen” by those of the Army of the British East India Company and those of the aristocratic class who purchased their commissions.

The British Royal Navy never entertained the idea of the sale of commissions. Officers of the Navy advanced by merit and/or seniority. Even so, nepotism was not dead among British officers. A young gentleman could advance quicker if he was fortunate enough to have an admiral or vice admiral in his family, assuming he passed the relevant exams/tests.

According to Wikipedia’s article on the Purchase of Commissions, “There were several key reasons behind the sale of commissions:

The official values of commissions varied by regiment, usually in line with the differing levels of social prestige of different regiments.

In 1837 for example, the costs of commissions were:

These prices were not incremental. To purchase a promotion, an officer only had to pay the difference in price between his existing rank and the desired rank. [Goldsmith, Jeremy (May 2007), “A gentleman and an officer – Army commissions”, Family Tree Magazine, 23 (7), pp. 10–13.]

If an officer wished to sell out his commission, he could do so, but only for the official value of the commission. He had to offer it to the next highest ranking officer of his regiment. Unfortunately, some of the lower ranks could not afford the commission, for there were also other costs operating among the officers. These were known as the “over-regulation price” or the “regimental value.” Occasionally, the commissions were auctioned off, especially those in the “more fashionable” regiments. As many officers were second or third sons and would have little beyond their “pensions” to live upon once they exited service, they often drove up the price. It was not unknown for officers who incurred or inherited debts to sell their commission to raise funds.

Colonels of fashionable regiments were also known to refuse the sale of commission if the person purchasing it were not of the colonel’s social status or to his liking. “This was especially the case in the Household and Guards regiments, which were dominated by aristocrats. Elsewhere however, it was not unknown for Colonels to lend deserving senior non-commissioned officers or warrant officers the funds necessary to purchase commissions. 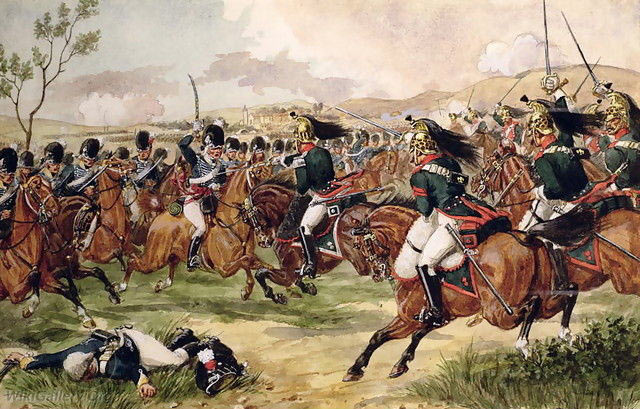 “Not all first commissions or promotions were paid for. If an officer was killed in action or was appointed to the Staff (usually through being promoted to Major General), this created a series of “non-purchase vacancies” within his regiment. (These could also arise when new regiments or battalions were created, or when the establishments of existing units were expanded.) However, all vacancies arising from officers dying of disease, retiring (whether on full or half pay) or resigning their commissions were “purchase vacancies”. A period, usually of several years, had to elapse before an officer who succeeded to a non-purchase vacancy could sell his commission e.g. if a Captain were promoted to Major to fill a non-purchase vacancy but decided to leave the Army immediately afterwards, he would receive only the value of his Captain’s commission.” [Purchase of Commissions in the British Army]

Regulations required minimum lengths of service for the various ranks. These restricted officers from selling or exchanging their commissions to avoid active service. This would be in the case of the militia. Exceptions were at the discretion of the Commander in Chief. In 1806, Mary Anne Clarke, the mistress of the Duke of York, the acting Commander in Chief at the time, brought scandal to the York’s door when she was accused of selling commissions to plump up her own purse.

“The worst potential effects of the system were mitigated during intensive conflicts such as the Napoleonic Wars by heavy casualties among senior ranks, which resulted in many non-purchase vacancies, and also discouraged wealthy dilettantes who were not keen on active service, thereby ensuring that many commissions were exchanged for their face value only. There was also the possibility of promotion to brevet army ranks for deserving officers. An officer might be a subaltern or Captain in his regiment, but might hold a higher local rank if attached to other units or allied armies, or might be given a higher Army rank by the Commander-in-Chief or the Monarch in recognition of meritorious service or a notable feat of bravery. Officers bearing dispatches giving news of a victory (such as Waterloo), often received such promotion, and might be specially selected by a General in the field for this purpose.” [Purchase of Commissions in the British Army]

Allen, Douglas. “Compatible Incentives and the Purchase of Military Commissions.”

“Purchase of Commissions in the British Army,” Wikipedia

15 Responses to Purchasing Commissions During the Napoleonic Wars