April Fools’ Day (alternatively April Fool’s Day, sometimes All Fools’ Day) is celebrated on 1 April every year. 1 April is not a national holiday, but is widely recognized and celebrated in various countries as a day when people play practical jokes and hoaxes on each other called April fools.

In parts of Europe, children and adults tack paper fishes on each other’s back as a trick and shout “April fish!” These late 19th to early 20th Century postcards reflect this tradition. 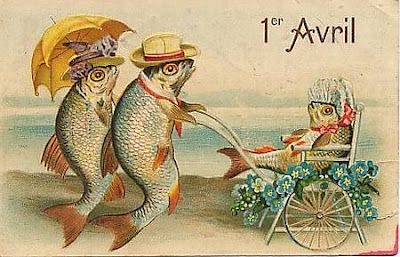 ” Feast of Fools and the Church ~ In the festival, young people would chose to play a mock pope, archbishop, bishop, or abbot to reign as Lord of Misrule.  Participants of the festival would then “consecrate” him with many ridiculous ceremonies in the nearest main church, giving names such as Archbishop of Dolts, Abbot of Unreason, or Pope of Fools.  This consecration ceremony often mocked the performance of the highest offices of the church. While other participants dressed a sundry of masks and disguises, engaged in songs and dances and practiced all manner of revelry within the church building. The Feast of Fools was eventually discontinued and forbidden 1431 for its blasphemous manner.

“April Fool’s Day and Hilaria ~ The ancient festival known as Hilaria (Latin for cheerful, merry, joyful) was celebrated on the vernal (spring) equinox in honor of the goddess Cybele. The goddess Cybele has a long and extended history from Anatolia to Rome. The Romans celebrated Hilaria, as a feria stativa (a set free day [i.e no work]), on March 25 in honor of Cybele, the mother of the gods. The days of the festival were devoted to general rejoicings and public sacrifices (hence its name), and no one was allowed to show any symptoms of grief or sorrow( unless it was the “Day of Mourning”).

“According to the historian Herodian, there was a procession and a statue of the goddess was carried. Before this statue, the most costly works of art belonging either to wealthy Romans or to the emperors themselves proceeded. All kinds of games and amusements were allowed on this day; masquerades were the most prominent among them, and everyone might, in his disguise, imitate whomsoever he liked, and even magistrates.”

The earliest recorded association between 1 April and foolishness is an ambiguous reference in Chaucer’s Canterbury Tales (1392). Many writers suggest that the restoration of 1 January by Pope Gregory XIII as New Year’s Day of the Gregorian Calendar in the 16th century was responsible for the creation of the holiday, sometimes questioned for earlier references.

In Chaucer’s Canterbury Tales (1392), the “Nun’s Priest’s Tale” is set Syn March bigan thritty dayes and two. Modern scholars believe there is a copying error in the extant manuscripts and that Chaucer actually wrote, Syn March was gon. Thus, the passage originally meant 32 days after April, i.e. 2 May, the anniversary of the engagement of King Richard II of England to Anne of Bohemia, which took place in 1381. Readers apparently misunderstood this line to mean “March 32,” i.e. 1 April. In Chaucer’s tale, the vain cock Chauntecleer is tricked by a fox.

In the late 17th Century, Francis Osborne mentions the “impertinent errands, as the Dutch youth do fools on the second of April,” in his Deductions from the History of the Earl of Essex (1659). In 1686, John Aubrey mentions a “Fooles holy day. We observe it on ye first of April. And so it is kept in Germany everywhere” in his Remains of Gentilism and Judaism.

Hoaxes.org tells us, “The French term for ‘April Fool’ is ‘poisson d’Avril.’ It translates literally as ‘April Fish.’ The term appears in several late-medieval French poems — first in the work of Pierre Michault (1466) and next in La Livre de la Deablerie (1508), by Eloy d’Amerval. This has led some to suggest, quite reasonably, that these may be early April Fool’s Day references. However, etymologists believe that the phrase ‘poisson d’Avril’ originally referred to a matchmaker, or to someone who delivered messages between two lovers. It was only in the late 17th century that the phrase acquired its modern association with April Fool’s Day. And if we examine these late-medieval poems, we see that this is the case. For example, Michault’s poem describes the advice being given to a page, who is being told how to deliver messages between a lord and lady to further their illicit affair, and how to do this to his own advantage. Michault writes:

Now you should say to the Lord, ah, sir, I know of a fine and pleasing advantage, by which for a doublet I shall bring you together; truthfully, carnal love is a proper desire, and thus there is no danger or peril, but still, I shall be your ‘poisson d’avril’.

“There’s no indication that this has anything to do with April Fool’s Day. Likewise, d’Amerval wrote, “le chief des ruffyens, Houlier, putier, macquereau infame De maint homme et de mainte fame, Poisson d’Apvril.” Loosely translated, this means something like, “chief ruffian, whore-monger, pimp of many a man and many a woman, panderer (April fish).” The way d’Amerval is using the phrase doesn’t suggest any connection with April Fool’s Day.

” Therefore, these early uses of the phrase ‘poisson d’Avril,’ although intriguing, do not appear to be references to April Fool’s Day. [Meanwhile, there is] Verzenderkensdag. In 1561, the Flemish poet Eduard De Dene, who lived in the city of Bruges, published his Testament Rhetoricael. The book consisted of a large collection of poems and songs, and ‘published’ is perhaps not the right word to describe its debut, since it was entirely handwritten. But on page 358, the book included a poem titled “Refereyn vp verzendekens dach / Twelck den eersten April te zyne plach.” This is late-medieval Dutch meaning (approximately) “Refrain on fool’s errand-day / which is the first of April.” The poem described a nobleman who sent his servant back and forth on various absurd errands on April 1st, ostensibly to help prepare for a wedding feast.

De Dene’s Testament Rhetoricael, page 358.
The ‘April Fool’ poem begins on the bottom of the right-hand page. (Detail below)

“There’s no doubt that the poem is about April Fool’s Day. In fact, in Belgium April 1 is still referred to as “Verzenderkensdag”. So this poem is the earliest unambiguous reference to April Fool’s Day that we currently know of. Its existence establishes that the Dutch have been playing pranks on April 1 since at least the mid-sixteenth century. Given that De Dene assumes his readers are familiar with “verzendekens dach,” it’s probable that the custom is much older than the 1560s. But exactly how much older, we don’t know.

Many writers suggest that April Fools Day began because those who celebrated the beginning of the year on 1 January made fun of those who celebrated it on 1 April. Unfortunately, this simple explanation does not take into account of the spread of the holiday in parts of Europe. The Gregorian calendar was not adopted in England until 1752, but a “Fools” day held roots dating back to Medieval times.

An 1857 ticket to “Washing the Lions” at the Tower of London in London. No such event ever took place.

There is also no historical evidence, only conjecture as to how the change from the Julian to the Georgian calendar affected this holiday’s origin.

The use of 1 January as New Year’s Day was common in France by the mid-16th century, and this date was adopted officially in 1564 by the Edict of Roussillon.

A study in the 1950s, by folklorists Iona and Peter Opie, found that in the UK, and in countries whose traditions derived from the UK, the joking ceased at midday. A person playing a joke after midday is the “April fool” themselves. But this practice appears to have lapsed in more recent years.

In Scotland, April Fools’ Day is traditionally called Hunt-the-Gowk Day (“gowk” is Scots for a cuckoo or a foolish person), although this name has fallen into disuse. The traditional prank is to ask someone to deliver a sealed message requesting help of some sort. In fact, the message reads “Dinna laugh, dinna smile. Hunt the gowk another mile.” The recipient, upon reading it, will explain he can only help if he first contacts another person, and sends the victim to this person with an identical message, with the same result.

The 1 April tradition in France, Romandy and French-speaking Canada includes poisson d’avril (literally “April’s fish”), attempting to attach a paper fish to the victim’s back without being noticed. This is also widespread in other nations, such as Italy, where the term Pesce d’aprile (literally “April’s fish”) is also used to refer to any jokes done during the day. This custom also exists in certain areas of Belgium, including the province of Antwerp. The Flemish tradition is for children to lock out their parents or teachers, only letting them in if they promise to bring treats the same evening or the next day. 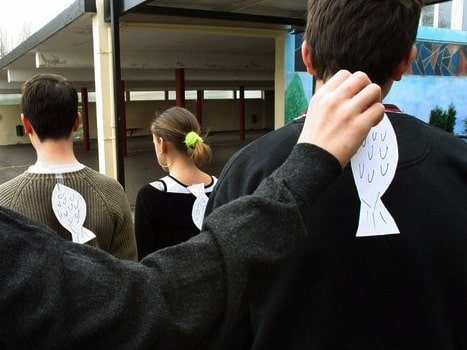 In Poland, prima aprilis (“April 1” in Latin) is a day full of jokes; various hoaxes are prepared by people, media (which sometimes cooperate to make the “information” more credible) and even public institutions. Serious activities are usually avoided. This conviction is so strong that the anti-Turkish alliance with Leopold I signed on 1 April 1683, was backdated to 31 March.