What did Jane Austen Know of Prize Money Awarded by the British Royal Navy During the Late Georgian Era?

Posted on September 1, 2021 by reginajeffers

Prize money awarded by the British Royal Navy usually came about during naval warfare, but there were other means for a man to earn “his fortune.” The capture of enemy ships or of cargoes belonging to an enemy in time of war customarily earned the men upon a ship prize money. The captured ship could be in port at the outbreak of the war or captured in international waters or other waters that were not the territorial waters of a neutral state. A Prize Court customarily adjudicated the claim for prize money, first, condemning the prize before any distribution of cash or good could be made to the captors.

Contraband goods being shipped to enemy-controlled territory and used to make war was considered part of the “prize.” Occasionally, prizes were awarded for the capture of pirate ships, slave ships (after the abolition of the slave trade) and ships in breach of The Acts of Trade and Navigation (a long series of English laws that developed, promoted, and regulated English ships, shipping, trade, and commerce between other countries and with its own colonies). “Similar monetary awards include Military Salvage, the recapture of ships captured by an enemy before an enemy Prize Court has declared them to be valid prizes (after such ships have been condemned, they are treated as enemy ships), and payments termed Gun money, Head Money or Bounty, distributed to men serving in a state warship that captured or destroyed of an armed enemy ship. The amount payable depended at first on the number of guns the enemy carried, but later on the complement of the defeated ship. 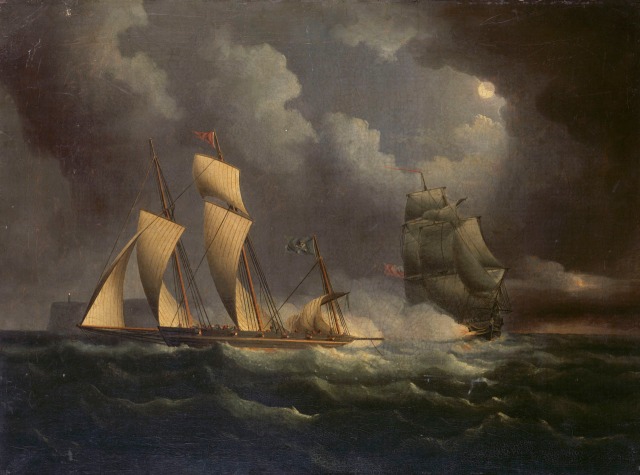 “Certain captures made by armies, called Booty of War, are distinct from naval prize because, unlike awards under naval prize legislation, the award of booty is only made for a specific capture, often the storming of a city; the award does not set a precedent for other military captures in the same war, and does not require adjudication by a prize court. When the British army and navy acted together, it was normal for instructions to say how any prizes and booty should be shared, and the shares allocated. In this case, combined naval and military force to be dealt with under naval prize law rules. Although prize law still exists, the payment of prize money to privateers ceased in practice during the second half of the 19th century and prize money for naval personnel was abolished by those maritime states that had provided it at various times in the late 19th century and the first half of the 20th century.” [Prize Money]

If you wish more information on pay scale, prize money distribution, etc., you might find “An Introduction to Pay and Prize Money in Aubrey’s Royal Navy” helpful.

Jane Austen’s naval brother Charles was assigned to command the Indian (18 guns) in January 1805. His primary role in Britain’s war efforts at that time off the North American coast was to protect trade, transport troops, and search American ships for British deserters. Those duties did not keep Charles Austen and his fellow shipmates and officers from hoping to capture an “enemy” ship to earn prize money. We know the Indian captured several privateer vessels. Some of these belonged to France’s allies. Some belonged to neutral nations. Most carried munitions, goods required by the French soldiers, or other contraband.

From 1805 – 1811, Charles Austen and his men brought claims to the Vice Admiralty courts in Halifax and Bermuda against some twelve vessels. As was custom at the time, the capturing captain of a ship could expect to receive a three-eighths share of the prize money.

Therefore, we can expect that if her brother was in such a position, Jane Austen would have held more than just general details on the ships, goods, and the prizes involved.

Comparing Charles Austen to Austen’s most famous sea captain, Captain Frederick Wentworth, Charles did not do as well as did the fictionalized Captain Wentworth. In reality, Charles Austen earned only about £1200 in prize money, while Wentworth accumulated some £25,000. Even so, the Austens knew of several of Charles’s associates who had earned much more than did he.

from Chapter 8 of Jane Austen’s Persuasion:

Anne suppressed a smile, and listened kindly, while Mrs Musgrove
relieved her heart a little more; and for a few minutes, therefore,
could not keep pace with the conversation of the others.

When she could let her attention take its natural course again,
she found the Miss Musgroves just fetching the Navy List
(their own navy list, the first that had ever been at Uppercross),
and sitting down together to pore over it, with the professed view
of finding out the ships that Captain Wentworth had commanded.

“Your first was the Asp, I remember; we will look for the Asp.”

“You will not find her there.  Quite worn out and broken up.
I was the last man who commanded her.  Hardly fit for service then.
Reported fit for home service for a year or two, and so I was sent off
to the West Indies.”

The girls looked all amazement.

“The Admiralty,” he continued, “entertain themselves now and then,
with sending a few hundred men to sea, in a ship not fit to be employed.
But they have a great many to provide for; and among the thousands
that may just as well go to the bottom as not, it is impossible
for them to distinguish the very set who may be least missed.”

“Phoo! phoo!” cried the Admiral, “what stuff these young fellows talk!
Never was a better sloop than the Asp in her day.  For an old built sloop,
you would not see her equal.  Lucky fellow to get her!  He knows there
must have been twenty better men than himself applying for her
at the same time.  Lucky fellow to get anything so soon,
with no more interest than his.”

“I felt my luck, Admiral, I assure you;” replied Captain Wentworth,
seriously.  “I was as well satisfied with my appointment as you can desire.
It was a great object with me at that time to be at sea;
a very great object, I wanted to be doing something.”

“To be sure you did.  What should a young fellow like you do ashore
for half a year together?  If a man had not a wife, he soon wants
to be afloat again.”

“But, Captain Wentworth,” cried Louisa, “how vexed you must have been
when you came to the Asp, to see what an old thing they had given you.”

“I knew pretty well what she was before that day;” said he, smiling.
“I had no more discoveries to make than you would have as to
the fashion and strength of any old pelisse, which you had seen
lent about among half your acquaintance ever since you could remember,
and which at last, on some very wet day, is lent to yourself.
Ah! she was a dear old Asp to me.  She did all that I wanted.
I knew she would.  I knew that we should either go to the bottom together,
or that she would be the making of me; and I never had two days
of foul weather all the time I was at sea in her; and after
taking privateers enough to be very entertaining, I had the good luck
in my passage home the next autumn, to fall in with the very French frigate
I wanted.  I brought her into Plymouth; and here another instance of luck.
We had not been six hours in the Sound, when a gale came on,
which lasted four days and nights, and which would have done for
poor old Asp in half the time; our touch with the Great Nation
not having much improved our condition.  Four-and-twenty hours later,
and I should only have been a gallant Captain Wentworth,
in a small paragraph at one corner of the newspapers; and being lost
in only a sloop, nobody would have thought about me.” Anne’s shudderings
were to herself alone; but the Miss Musgroves could be as open
as they were sincere, in their exclamations of pity and horror.

You might also wish to visit these resources for more information:

Half-Pay and Prize Money: Making a Living in Britain’s Navy

2 Responses to What did Jane Austen Know of Prize Money Awarded by the British Royal Navy During the Late Georgian Era?