“First Footing” It Into the New Year

Posted on December 30, 2020 by reginajeffers

I come very proud Scots, and, in my family, New Year’s (or Hogmanay as it was once called) played a popular part of my childhood. Although I admit to overspending at Christmas, something psychological as being raised poor, I am not one to overindulge, other than a bit of plum pudding and a small mincemeat pie for each of the the twelve days of Christmas. However, I find the traditions of New Year’s more fulfilling because beyond the singing and dancing and drinking too much there is something hopeful in the tradition, and, as 2020, has proven to be all that we despise, 2021 holds the promise of a “new” year.

Prior to the Reformation 1560, Christmas in Scotland, then called “Yule,” was celebrated in a similar fashion to the rest of Catholic Europe. However, the Reformation transformed attitudes to traditional Christian feasting days, including Christmas, and led in practice to the abolition of festival days and other church holidays; the Kirk and the state being closely linked in Scotland during the Late Middle Ages and the Early Modern period. [Christmas in Scotland: Christmas Around the World. World Book. 2001. p. 23.]

In the 1600s, many Scots rejected Christmastide celebrations as Papist excesses. Christmas in Scotland was traditionally observed very quietly, because the Church of Scotland, a Presbyterian church, for various reasons never placed much emphasis on the Christmas festival. Christmas Day only became a public holiday in 1958, and Boxing Day in 1974. The New Year’s Eve festivity, Hogmanay, was by far the largest celebration in Scotland. The gift-giving, public holidays and feasting associated with mid-winter were traditionally held between 11 December and 6 January. However, since the 1980s, the fading of the Church’s influence and the increased influences from the rest of the UK and elsewhere, Christmas and its related festivities are now nearly on a par with Hogmanay and “Ne’erday.” [Christmas in Scotland] The season’s highlight is still Hogmanay, the Scottish term for December 31 and all the “party” it entails. Indeed, the celebrations are so intense that most businesses remain closed until January 3.

It is believed that many of the traditional Hogmanay celebrations were originally brought to Scotland by the invading Vikings in the early 8th and 9th centuries. These Norsemen, or men from an even more northerly latitude than Scotland, paid particular attention to the arrival of the Winter Solstice or the shortest day, and fully intended to celebrate its passing with some serious partying. In Shetland, where the Viking influence remains strongest, New Year is still called Yules, deriving from the Scandinavian word for the midwinter festival of Yule. [The History of Hogmanay]

Hogmanay traditions have been adopted by many cultures. Did you realize that Scotland gave us “the bells” that chime in the New Year, the singing of “Auld Lang Syne” as soon as those bells cease tolling, and the taking of a “cup o’ kindness” —or several—in the hours that follow.

First Footing is also a Scottish tradition, which can still be found on the Isle of Man and in the northern shires of England. In first footing, a tall, dark-haired man is selected to be the first person to cross over the threshold of a home. He brings “good luck” and “good fortune” to the family. He customarily enters through the house’s front door, ushering in his hopes and goodwill for the upcoming year. He would exit through the rear door of the house, taking with him all the ill and lost hopes of the previous year. On his visit, he carries ceremonial gifts—a lump of coal, salt, a piece of shortbread and/or black bun, coins, and a wee dram of whisky—which brings warmth, food, financial stability,  luck and prosperity for the coming year.

The preference for dark coloring dates back to the days of the Viking invasion. As Historic UK explains, back then, “’a big blonde stranger arriving on your door step with a big axe meant big trouble, and probably not a very happy New Year!’ (The choice of a man surely has a less surprising explanation: misogyny.) Even on the Isle of Man, ‘a light-haired male or female is deemed unlucky to be a first-foot or qualtaagh.’ If first footing ever takes root on this side of the Atlantic, where Viking invasion has never been a real and present danger, let’s dispense with this part of the tradition and fight racism and sexism by designating dark-haired women as America’s official New Year’s threshold crossers. 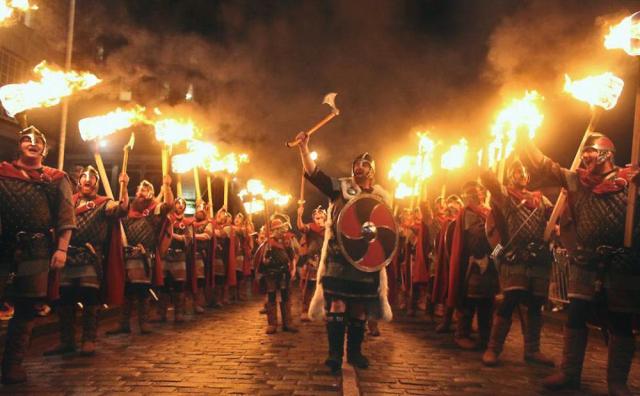 “The firework displays and torchlight processions now enjoyed throughout many cities in Scotland are reminders of the ancient pagan parties from those Viking days of long ago.

“The traditional New Year ceremony would involve people dressing up in the hides of cattle and running around the village whilst being hit by sticks. The festivities would also include the lighting of bonfires and tossing torches. Animal hide wrapped around sticks and ignited produced a smoke that was believed to be very effective in warding off evil spirits: this smoking stick was also known as a Hogmanay.

“Many of these customs continue today, especially in the older communities of the Highlands and Islands of Scotland. On the Isle of Lewis, in the Outer Hebrides, the young men and boys form themselves into opposing bands; the leader of each wears a sheep skin, while another member carries a sack. The bands move through the village from house to house reciting a Gaelic rhyme. The boys are given bannocks (fruit buns) for their sack before moving on to the next house.

“One of the most spectacular fire ceremonies takes place in Stonehaven, south of Aberdeen on the north east coast. Giant fireballs are swung around on long metal poles each requiring many men to carry them as they are paraded up and down the High Street. Again the origin is believed to be linked to the Winter Solstice with the swinging fireballs signifying the power of the sun, purifying the world by consuming evil spirits.”

Start the New Year Off Right with Scotland’s “First Footing”

4 Responses to “First Footing” It Into the New Year