Fleet Prison Marriages of the 1700s

Marriage ceremonies associated with the Fleet Prison is London were many in the mid to late 1700s. It is estimated that in the 1740s over half of London’s marriage ceremonies took place in “marriage shops” surrounding the Fleet Prison. By some accounts, 800,000 people named in the marriage records of the times were married in this manner. These were what some termed as “clandestine” or “irregular” marriages. According to GenGuide, “A marriage without banns or licence or conducted away from the parish of residence of both parties was considered ‘clandestine’ and a marriage that took place in one of the party’s parishes without banns or licence or away from the parish of either party by banns or licence was considered ‘irregular’. Whichever way was chosen, the union was in the eyes of the law a legally binding contract. Many nonconformists married in this manner often in their own meeting houses.

“Marriage registers from ceremonies conducted in and around the Fleet Prison in London, with many taking place in local taverns and coffee houses. As clergymen were often confined to the Fleet as debtors, they performed marriage ceremonies for other inmates for a fee without licence or other formalities. This practice was stopped in 1711, but clergy carried on conducting irregular but legal marriage ceremonies in nearby taverns. These so called ‘marriage shops’ could also be found in the grounds of the May Fair Chapel and the King’s Bench prison and other centres such as the Holy Trinity, Minories and St. James, Dukes Place. The ceremonies were conducted by individuals who had taken holy orders without licence who could legally marry two people at any time and at any place. Although they ignored the official rules on using banns and licences the marriages were still legally valid.”

Between 1613 and 1754, a legal loophole created a situation where on-the-spot marriages could be carried out in an area surrounding the Fleet Debtors’ Prison, known as the ‘Liberties of the Fleet’. There is suspicion that some illicit matches took place, against the will of one or other of the parties, but judging from the number of unions made (estimated to be almost 250,000 in just 60 years up to 1753), it seems more likely that the ability to marry without parental consent might well have been the more common motivation.

Clergymen  who were imprisoned for debt, set up shop in the Liberty of Fleet Prison  and conducted weddings. At the time, marriage needed only to be conducted by an ordained clergyman of the Church of England for the ceremony to be valid. Many of these weddings passed unnoticed into history.  Sometimes these marriages were bigamous  and quite often fraudulent. A man, for example, might marry a woman with a bit of money or property and  then relieve her of it before decamping. He might then go elsewhere and marry another with the due reading of the banns.

While the courts accepted all sorts of evidence that a couple had been joined together in a valid marriage, they were very reluctant to accept the certificate or register of a Fleet parson. This reluctance was based on numerous examples of fraud, forgery, and false entries.

The Lord Chancellor, Lord Hardwicke thought to close those loopholes. The Marriage Act 1753, full title “An Act for the Better Preventing of ClandestineMarriage“, popularly known as Lord Hardwicke’s Marriage Act (citation 26 Geo. II. c. 33), was the first statutory legislation in England and Wales to require a formal ceremony of marriage. It came into force on 25 March 1754. “The legislation stipulated that marriage must take place in a licensed Anglican parish church in the bride or bridegroom’s own parish and be recorded in a special book with a numbered space for each entry, to prevent fraud. Banns were read publicly on three separate Sundays, which allowed for objections to be raised possibly by parents of children under the age of 21 or previous spouses to call a halt to the proposed wedding. The legislation also allowed marriage by licence in a different parish to that of the couple’s residence. The only exceptions allowed were for Quakers and Jews, so all other non conformists including Roman Catholics had to marry in an Anglican church.

“As the Hardwicke’s Act did not apply in Scotland, English ‘runway’ couples were able to obtain a valid marriage certificate in the Scottish border towns such as Ayton, Chain Bridge, Coldstream, Gretna Green, Halidon Hill, Ladykirk, Lamberton, Mordington, Norham and Paxton. Less well known areas for ‘irregular’ marriages were the coaching inns in the Canongate district of Edinburgh and South Leith marriages which are transcribed in Marshall’s Calendar of Irregular Marriages in the South Leith Kirk Sessions Records 1697-1818. The English Episcopal Chapels in Scotland during the 19th century also married English runaways.

“In Scotland a marriage was considered ‘regular’ after the reading of banns and if the marriage ceremony was conducted by a minister of the established Church of Scotland. The 1834 Marriage (Scotland) Act extended ‘regular’ marriages by permitting dissenting clergy to conduct marriage ceremonies. If these requirements were not adhered to the marriage was deemed ‘clandestine’ and illegal but crucially could be valid in the eyes of the state. Under Scots Law a marriage was considered valid (but not legal) under certain conditions as follows:

§  Both parties declared themselves married in the presence of witnesses.

§  Simply living together with the status of man and wife – by habit and repute.

“Irregular marriages in Scotland were abolished with the passing of the Marriage (Scotland) Act 1939 which introduced civil marriages with marriages only becoming legal and valid on production of a certificate proving publication of banns or a notice of intended marriage and if celebrated in an office of an authorised Registrar. Irregular marriages were unrecorded in the statutory marriage registers.” (Fleet and Other Irregular Marriages) 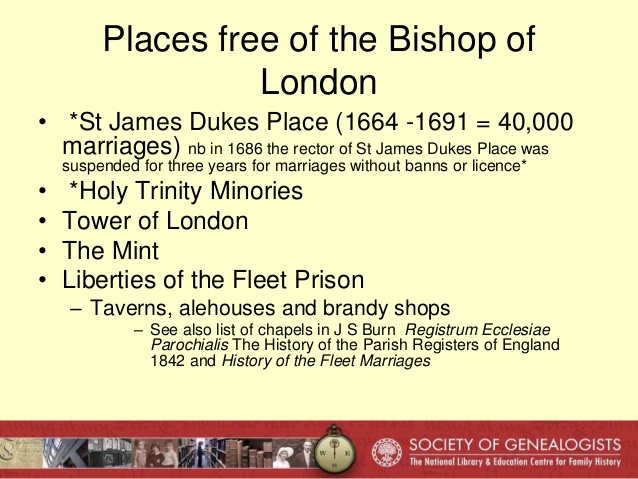 http://british-history.ac.uk/report.aspx?compid=45111 (Extract from ‘Old and New London: Volume 2’ (1878) by Walter Thornbury entitled The Fleet Prison)
www.bmdregisters.co.uk/help/aboutRG7.htm#whatis (Guide to the Fleet registers held at TNA in RG 7)
www.hertsfhs.org.uk/hfphs42.html (Fleet Marriages of Hertfordshire People to 1754)

5 Responses to Fleet Prison Marriages of the 1700s