Pride and Pantiles: A Jaunt to Tunbridge Wells, a Guest Post from Corrie Garrett

Posted on September 14, 2020 by reginajeffers

This post first appeared on the Austen Authors’ blog on August 6, 2020. Enjoy!

So, one of my favorite things about writing JAFF is researching new places for my characters to visit (new to me, that is.) I have only been to the UK once, when I was thirteen, and sadly I hadn’t yet fallen in love with Jane Austen. My older sister was doing watercolors of cottages and ecstatically pointing out literary connections to every location, and I… just didn’t quite get it. (It was before I discovered Austen and Heyer and so on.) We had a great time nonetheless–probably making every quintessential tourist mistake–but I hope to go back with more appreciation someday and make all those mistakes for myself!

Anyway, recently I was kicking off a story from Rosings Park during Lizzy’s stay with Charlotte, and I began to examine Kent for options. The whole area is full of connections to Jane Austen and to her stories, but one town that doesn’t appear much in the literature is Tunbridge Wells. Jane Austen’s brother Henry, her sometimes editor and frequent promoter, was buried there. The town is glancingly mentioned in Northanger Abbey, but only for vain Miss Thorpe to compare its balls to Bath’s. So, while I’d read a lot about Jane’s life in Tonbridge, here was a charming little town nearby ready to host some beloved characters.

Tunbridge Wells would be getting just a bit fusty by the Regency period. The seaside resorts were more popular, but Lady Catherine, in my opinion, is just the sort of person to appreciate the faded glory of Tunbridge Wells. Its prime was back in the mid-1700s when Beau Nash, by then a well-known older man, took over with the same ruthless but effective management he’d brought to Bath years before. Lady Catherine’s father could very well have been a contemporary of Nash, on the younger side, and I suspect that what her father admired she considered quality for the rest of her life.

Furthermore, Anne de Bourgh was never in good health, and where better to let Anne “take the waters” than Tunbridge Wells? A mere 16 or 17 miles from Rosings Park (which was “near Westerham”), high class, and probably full of Lady Catherine’s contemporaries. And when better to go than when she might reasonably demand Darcy’s escort to the spa town?

And now I had a wonderful location for my story. For walks along the Pantiles, a columned, Georgian walk still popular today, where an old friend might ignorantly conclude that the pretty girl on Darcy’s arm was the reclusive cousin he was finally marrying. The perfect town for lounges where the gentry sipped cool, iron-rich water in the morning and Georgiana might meet a portraitist making the rounds of society after making a hit at Somerset House. The perfect town for rides to nearby ruins, where Lizzy might have a moment alone to clarify a few things with Darcy.

I also allowed Darcy to know Sir John Shelley-Sydney (Percy Byshe Shelley’s uncle) who was restoring an historic estate called Penshurst only about six miles away. A chance for Darcy to see Lizzy treated the same way he treated her sisters and to feel all the feelings we want him to have!

In short, I love allowing the settings to organically influence what these great characters might do. One tidbit which caught me off guard was that the original pantiles—the square clay tiles baked in a pan—were mostly replaced by plain flagstones in 1792! Alas for my pantiles. Not all research makes it into the story of course, but I decided that was a bit of lost romanticism that Lizzy would notice.

Excerpt from A Lively Companion

“I’ve heard of the Pantiles of Tunbridge,” Lizzy said, wanting to set the conversation firmly on neutral ground, “but I wasn’t sure this morning which tiles I should be admiring. I’m afraid all the paving stones look like plain rock to me.”

“The pantiles were almost all replaced,” Mr. Darcy explained, “about ten years ago. Perhaps fifteen. But there are still a few about. I’ll try to find a few to point out to you.”

“Please do! I know the story about Queen Anne, of course, paying for it to be paved after her son tripped and fell, but I need to see a few so that I can make the story at least partly about myself when I repeat it in Hertfordshire. That is the fun of sight-seeing, is it not?”

If you’d like a longer trip to Tunbridge Wells, check out my first Austen Ensemble novel, A Lively Companion. And let me know in the comments if you’ve ever been there! 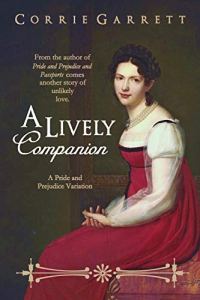 Check out A Lively Companion (An Austen Ensemble, Book 1)  by Corrie Garrett

A Pride and Prejudice Variation

Lizzy Bennet is more insulted than flattered when Lady Catherine asks her to be a temporary companion to Miss de Bourgh. Yes, a visit to Tunbridge Wells would be an interesting diversion, but at what cost?

When her father unexpectedly supports the plan, wanting Lizzy to gain a wider acquaintance and knowing it won’t get easier than this, Lizzy reluctantly submits. Thus begins a springtime trip of misunderstandings, revelations, and unexpected proposals.

When Mr. Darcy realizes Lizzy is not going home as planned, he feels foolish for nearly proposing due to an arbitrary deadline. Determined to make up his mind one way or another, he accompanies the party to the Wells.

While Miss de Bourgh takes the famed waters, Lizzy stumbles feet first into a friendship with Darcy’s sister and cousins. Indeed, she enjoys nearly all Darcy’s friends and family. She almost likes him, when he’s around them.

A Lively Companion is a traditional variation on Pride and Prejudice, celebrating the humor, poignancy, and surprising inconsistency of life.

2 Responses to Pride and Pantiles: A Jaunt to Tunbridge Wells, a Guest Post from Corrie Garrett