How Was It to Shop in Market Towns and Villages of Early 1800s England?

17 Of The Most Beautiful Villages To Visit In Britain! – Hand …
handluggageonly.co.uk

Obviously, there would not be street vendors, but rather peddlers, who would travel from village to village, selling their ware. “A peddler, in British English pedlar, also known as a canvasser, cheapjack, monger, higler or solicitor (with negative connotations since the 16th century), is a traveling vendor of goods. In England, the term was mostly used for travellers hawking goods in the countryside to small towns and villages; they might also be called tinkers or gypsies. In London more specific terms were used, such as costermonger. There has long been a suspicion of dishonest or petty criminal activity associated with pedlars and travelers. The origin of the word, known in English since 1225, is unknown, but it might come from French pied, Latin pes, pedis “foot”, referring to a petty trader travelling on foot. Peddlers usually travelled on foot, carrying their wares, or by means of a person- or animal-drawn cart or wagon (making the peddler a hawker).” (Peddlers)

Because they did not fit into clear professional categories, peddlers could be highly mobile. They brought the products to the consumer’s door. Without the cost of maintaining permanent shops, the peddlers could charge lower prices for a variety of small goods. (Sixteenth Century Journal)

Also, men would travel mending tin pots, sharpening knives, acting as at catchers, rag and bone men, sellers of chapbooks and cheap repository tracts, etc. Let us take a quick look at several of these types.

Rag-and-bone men collected unwanted household items and resold them to merchants. The traditional rag-and-bone man carried a bag over his shoulder and made his way about on foot. Occasionally a wealthier rag-and-bone man would have a cart pulled by a small pony or donkey, however these were few. Most of these men lived in extreme poverty. They collected old rags, bones, and bits of metal.

A chapman was another early itinerate pedlar. A chapman was a hawkers of chapbooks, broadside ballads, etc. A chapbook was an early popular type of literature, which was produced cheaply. They were generally small, paper-covered books, customarily printed on a single sheet, which was folded into books of 8, 12, 16, and 24 pages. Woodcuts, not related to the text, were often included. The tradition originated in the 16th Century and rose in popularity through the 18th Century. The text included folk tales, nursery rhymes, poetry, religious tracts, political tracts, children’s tales, etc. (Chapbook)

Meanwhile, broadside ballads (popular songs) sold for a penny or a halfpenny. They preceded chapbooks. “There are records from Cambridgeshire as early as in 1553 of a man offering a scurrilous ballad ‘maistres mass’ at an alehouse, and a pedlar selling ‘lytle books’ to people, including a patcher of old clothes in 1578.” (Chapbook)

A badger was a dealer in food or victuals which he “purchased in one place and carried for sale in another place. The Oxford English Dictionary gives the earliest entry as being from Bristol in 1500, but there were bager(s)gates at York in 1243 and in Lincoln by 1252. It continued in use until the 19th century in Great Britain. Badger was specifically applied to those dealing in grain for food, but was also applied generically to food commodity dealers. These included those dealing in grain for brewing (maltsters) or meal for bread-making, (mealmen) while others specialised in butter and cheese. Other grains, beans, peas or even vetch were traded in years when wheat and barley prices were high. The legislation also referred to kidders, drovers of livestock, laders and carriers.” (Badger)

Some of the towns were large enough that we would call them cities, and others were so small one one would barely describe them as villages. At this time they were not officially designated by size, but by the form of government and the founding documents as well as whether or not the place had a cathedral or abbey. Jane Austen has villages in both Pride and Prejudice and Emma. In Pride and Prejudice, readers travel to the villages of Meryton in Hertfordshire, Lambton in Derbyshire, and Hunsford in Kent. In Emma, Emma stands in the doorway of Fords in Highbury–the general store, and looks down the street. “Emma went to the door for amusement . . . ; and when her eyes fell only on the butcher with his tray, a tidy old woman travelling homewards from shop with her full basket, two curs quarrelling over a dirty bone, and a string of dawdling children round the baker’s little bow-window eyeing the gingerbread, she knew she had no reason to complain, and was amused enough; quite enough still to stand at the door. A mind lively and at ease, can do with seeing nothing, and can see nothing that does not answer. (Emma, 233)” “Jane Austen’s famous literary advice to her niece Anna—“3 or 4 Families in a Country Village is the very thing to work on” (9 September 1814) — has been widely accepted as a summary statement of her own praxis, and Emma is the novel most frequently cited as the exemplar of Austen’s focus on isolated and insulated country communities.” (“It must be done in London”: The Suburbanization of Highboy by Tara Ghoshal Wallace)

Market towns had a special status, but were not cities. They were generally larger than the surrounding villages, and shopping did not come from street vendors, except on market day. One would likely find a blacksmith, dressmaker, sundry’s store, a small circulating library, a couple of inns, possibly, a shop that sold meat pies, a hat maker, etc. An established church was likely. Physicians, surgeons, lawyers were some of the professionals found in the market towns. “Market town or market right is a legal term, Markoriginating in the medieval period, for a European settlement that has the right to host markets, distinguishing it from a village and city. Farmers and their wives brought their produce to informal markets held on the grounds of their church after worship. Market towns grew up at centres of local activity and were an important feature of rural life.  Markets were located where transport was easiest, such as at a crossroads or close to a river ford.

“The English monarchy created a system by which a new market town could not be established within a certain travelling distance of an existing one. This limit was usually a day’s worth of travelling to and from the market, and buying or selling goods. If the travel time exceeded this standard, a new market town could be established in that locale. As a result of the limit, official market towns often petitioned the monarch to close down illegal markets in other towns. These distances are still law in England today. Other markets can be held provided that they are licensed by the holder of the Royal Charter, which tends currently to be the local town council. Failing that, the Crown can grant a license. As traditional market towns developed, they had a wide main street or central market square. These provided room for people to set up stalls and booths on market days. Often the town erected a market cross in the centre of the town, to obtain God’s blessing on the trade.” (Market Town) 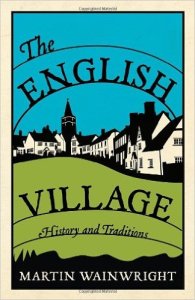 A book I would recommend is THE ENGLISH VILLAGE, which was a study of a large cross section of little villages and the kinds of things they have in common. Here is the book blurb from Amazon: The village remains a quintessential and much-loved treasure of the English countryside. This rural idyll has inspired generations of great poets, novelists, and artists including the likes of Constable, Hardy, Wordsworth, as well as providing the picturesque setting for modern TV series such as Lark Rise to Candleford and Cranford. The English Village celebrates all that is unique and loved about a typical village—the pub, the green, the school, the church, the pond, the local shop and more—as well as exploring how the village has changed over the centuries. Also includes fascinating information on the origins of village names—Siddington, for example, means the farm of the valley (sidd: valley, in: belonging to, ton: farmland). Beautifully illustrated, and filled with facts, figures, customs, and lore, there is a wealth of fascinating information to be discovered in this charming book.

Actually, each village seems to have its own odd little eccentric thing about it, some quirky little detail like a local product or a haunted tale about the village green or what-have-you. Depending on the region, they could also have different things, like in the Midlands, pottery related shops, or in the North, woollens-related businesses, and along the coast, shipbuilding or timber processing and/or lots of extra pubs for all those sailors, as well as inns for travelers. Each village was constructed around a church, a rectory or parsonage for the minister to live in, a pub, a hall, a general store with post office, maybe a doctor’s home office, possibly a school or a building or home that serves as a dame school, a green with a few trees and/or a pond. Country villages are obviously very agricultural so one should not neglect the possibility of related businesses like blacksmiths, smokehouse, bakers. Maybe even a mill or a nearby river or canal.

“In Britain, peddling is still governed by the Pedlars Act of 1871, which provides for a “pedlar’s certificate”. Application is usually made to the police. In the late 20th century, the use of such certificates became rare as other civic legislation including the Civic Government (Scotland) Act 1982 and the Local Government (Miscellaneous Provisions) Act 1982 for England & Wales introduced a street trader’s licence. As of 2008 the pedlar’s certificates remain legal and in use, although several local councils have sought to rid their area of peddlers by way of local bylaw or enforcement mechanisms such as making them apply for a street trader’s license.” (Peddler)

7 Responses to How Was It to Shop in Market Towns and Villages of Early 1800s England?