The Mecklenburg Declaration of Independence, a Year Before Thomas Jefferson’s Document

Some of you realize, I live in North Carolina, a state draped in rich history. One of those events is the the Mecklenburg Declaration of Independence. A year before Thomas Jefferson’s “Declaration,” there was Meck-Dec, as we in the area fondly call it.

After the French and Indian War, King George and the British Parliament sometimes ignored the American colonies and sometimes saw them as a source of income for the numerous wars in which they engaged. The Stamp Act and the taxes on tea, however, provoke the colonists into breaking with Great Britain. When the British Army occupied Boston and close the port, word of the aggression quickly spread, even to the backwoods of Mecklenburg County in North Carolina. Not liking what they heard, those within the county authorized Colonel Thomas Polk, the commander of the county militia, to call a meeting where the “aggression” might be discussed. Two representatives were named by each of the nine militia companies within the county. Whatever decision theses men would make would be binding on the county’s citizens. These men met at the county courthouse, which was located in Charlotte, a town named for King George III’s queen, Charlotte of Mecklenburg-Strelitz.

This meeting took place on Friday, 19 May 1775. Imagine how these men felt when an express rider, on the very day of the meeting, brought word of the Battle of Lexington and the Battle of Concord. The news that British soldiers had killed and wounded British citizens (which was what the Americans considered themselves at the time) brought a new urgency to the discussion taking place in Charlotte.

Out of these discussion came the five resolutions that make up the Mecklenburg Declaration of Independence. It was sent to the North Carolina representative at the Continental Congress, and it declared that Mecklenburg County had separated from the Great Britain.

The five resolutions explained how Great Britain had “wantonly trampled on our rights and liberties and inhumanly shed the innocent blood of American patriots at Lexington.” It went on the say, we “dissolve the political bands which have connected us to the Mother country” and declare ourselves “a free and independent people.”  The laws were to remain the same but “The Crown of Great Britain never can be considered as holding rights, privileges, immunities, or authority therein.”  To read the complete text of the Mecklenburg Declaration of Independence, click here.

“This document was read from the courthouse steps the next day at noon to the acclamation of a large assembly of Mecklenburg citizens.  Everyone knew of the meeting on Friday the 19th and that whatever resulted, the news would be read out from the courthouse steps on Saturday.  The news of Lexington and Concord greatly increased the people’s interest.  Since the decisions made here would be binding on all of the citizens of the county, people came from far and wide to hear the news.

“Even as they were debating and approving what came to be known as The Mecklenburg Declaration, the delegates had realized that it lacked coherence and organization and they appointed a committee to revise it.  By May 31st the committee had completed their work which was not a revision but rather a completely new document, and which came to be called the Mecklenburg Resolves.  This new document was less emotional, more logical, and much better organized than the original:

“In short, finding themselves declared outlaws by the King, they set up their own government and prepared to defend themselves.  And note that they did this not just for Mecklenburg County, but for the whole thirteen colonies.  To read the complete text of the Mecklenburg Resolves, click here. 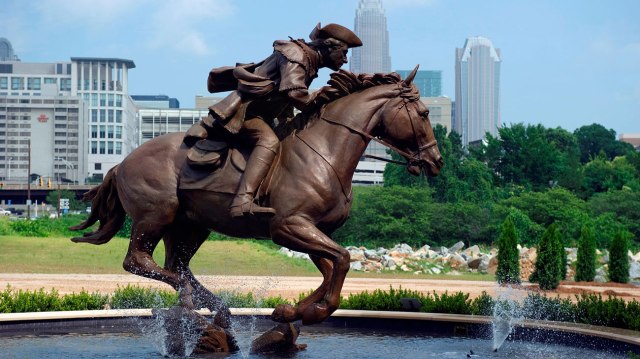 “On about June 1, 1775 Militia Captain James Jack set off for Philadelphia with both documents to lay them before the Second Continental Congress then meeting in that city.  When he returned he said that the representatives from North Carolina had read and approved the documents.  However, at that time the Congress was debating and approving a petition to the King asking for reconciliation so the Mecklenburg Declaration of Independence was forgotten and not head from outside of Mecklenburg County for many years.” (James Williams, June 10, 2008, The Mecklenburg Historical Association)

Graham, George Washington (1905). The Mecklenburg Declaration Of Independence, May 20, 1775, And Lives Of Its Signers. The Neale Publishing Company.

The Mecklenburg Declaration – The Celebrations

The Mecklenburg Declaration – The Controversy

2 Responses to The Mecklenburg Declaration of Independence, a Year Before Thomas Jefferson’s Document