Austen’s Use of Coincidence and Character Development, a Guest Post from Collins Hemingway

This post originally appeared on Austen Authors on 22 January 2020. Enjoy!

In a recent blog, I wrote about coincidences in Jane Austen’s work. I’m following up again today with a few more examples of how she used them and how this use affected her work.

Coincidences were a common contrivance to solve plot problems before and during Austen’s life. (And remain so in too many poor novels today.) Her novels had a few coincidences, but nothing like other books. Almost always, the important matters in Austen’s fiction result from actions of the characters themselves, not outside interventions. Her coincidences tend to clean up minor matters. As I mentioned previously, clerical livings come up twice at just the right time to settle the main couple’s finances in Sense and Sensibility and Mansfield Park.

The living in Mansfield Park is a major springboard for the plot, coming up at the start of the novel with the death of Mr. Norris and again at the end to provide for Edmund Bertram and his new wife Fanny. In between, the incoming clerical family turns out to be related to Henry and Mary Crawford. These are the two players who bring great fun and ultimate agony to the young people in the Bertram clan. The Crawfords, in turn, were raised by an admiral who provides Fanny’s brother with a critical promotion—part of Henry’s unsuccessful attempts to win the heart of the heroine, Fanny Price. There would be no action without this opening set of coincidences.

Emma is more typical. This novel has two minor coincidences involving Harriet Smith, the heroine’s protégé. The first one sets her in the potentially romantic path of another major character, Frank Churchill, after she has been beset by “gipsies.” The second gets her safely married to the young farmer, Robert Martin, when Emma is worried about Harriet’s interest in George Knightley. These happenstances don’t materially alter or drive the main plot. They just save Austen a clarifying scene here or there.

Most of Austen’s coincidences involve what I call the “gathering of the cast”—getting all the players in one place at the beginning. Usually, she brings everyone together quickly, trading off a coincidence or two for the ability to set a lively—and realistic—story into motion quickly. Pride and Prejudice provides a great example, when the major outsiders all come to Meryton within ten weeks of each other.

We can see the unhappy results when Austen doesn’t get things going snappily. It takes her five chapters and nearly fifty pages to gather the cast in Mansfield Park, and another twenty pages before Fanny Price begins to act in present time. These delays are a major reason that the novel has such a sluggish feel in comparison to Austen’s other works.

If we discount the coincidences related to the “gathering of the cast” in P&P, the only major plot contrivance involves the Gardiner family. Mrs. Gardiner, a relative, is used to reconnect Elizabeth and Darcy after the big fight that occurred during Darcy’s failed first proposal. Mrs. Gardiner ends up taking Elizabeth to Darcy’s home, the Pemberley estate, and later tells Elizabeth about Darcy’s assistance to the Bennet family in London.

Something of a minor deus ex machina (“god from the machine,” the general term for a plot contrivance), Mrs. Gardiner is Austen’s way of moving the chess pieces down the board. Her improbability has to do with her location—she grew up in the same county as Darcy—and the convenient change in plans that leaves Pemberley as the only target for Elizabeth’s visit. Austen’s use of Mrs. Gardiner is not perfect, though she plants Mrs. Gardiner’s roots in Derbyshire early; has her invite Elizabeth to travel early; and has a rational explanation for the change in plans. (Mr. Gardiner’s business schedule no longer allows the original plan of travel to the Lakes region.)

The Gardiners, of course, have another important role beyond moving the plot forward. They are both sensible, intelligent people who raise Darcy’s awareness that not all of Elizabeth’s family are social climbers or out-of-control teenagers. One critic has said that the Gardiners are the only truly noble family members surrounding Elizabeth. The mechanics of the Gardiner subplot are a little clumsy, but almost any plot device would be. There’s no snap-the-fingers solution by which Austen can get Elizabeth to Pemberley to ascertain Darcy’s true worth. 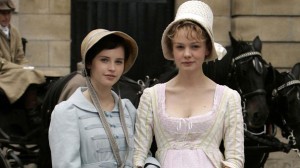 A character with this double role of character-plus-plot-device occurs in a lot of novels, especially Austen’s. Mrs. Allen brings Catherine Morland into society in Northanger Abbey, setting the main plot in motion. Her lack of oversight of Catherine also leaves her young charge subject to the aggressive courting of John Thorpe. In Sense and Sensibility, Mrs. Jennings links the Dashwood sisters with people in London and other places and she relays back critical information to them. Pop social observer Malcolm Gladwell has a term for such people—a “connector.” We can accept one “connector” in any novel, as long as the connector is drawn as a real person.

I’d be more concerned if the coincidences drove the stories in Austen more than they do, once things are under way. There is a reason that Austen’s plots seem relatively so undramatic while also very real. It’s that, once the characters begin to act, they behave like human beings we all have met and known in our lives. It is no coincidence that resolution of the major story lines comes through character, not contrivance.

2 Responses to Austen’s Use of Coincidence and Character Development, a Guest Post from Collins Hemingway