Life Below Stairs: English Servants Emigrating to Australia, the U. S., and Canada

Young girls who set out for Australia to earn a living as a domestic servant, opportunities to marry were not out of the question. In England, seduction ruled, but these young girls entered a different world, where they could consider being the mistress of their own houses, rather than the servant.

If you missed either of the first two pieces on English servants emigrating to Australia, you may find them here:

Life Below Stairs: English Servants Emigrating to Australia, Part I

Frank Huggett’s Life Below Stairs  (Book Club Associates, London, 1977, 143-145) provides us many examples of girls pursued by men looking for a wife.

A seamstress wrote to her mother in 1852: “I had an offer a few days after landing from a gold-digger possessed of £600 to £700. Since that, I have had another from a bushman with £900; he has gone to the Diggings again to make plenty of money. That I have not decided on yet. I shall have a handsome house and garden, and all I wish. Dear Mother, I only wish you were here to advise me; the fact is, I have so many chances -a midshipman for one – so you may guess how different things are here if you are respectable.” (page 143, originally from Eneas Mackenzie’s The Emigrants’ Guide to Australia, Clarke, Beeton, n.d., p 36).

Another girl arrived in Australia on 4 July 1848. She reportedly received three proposals in the first month in the country. The two women who preceded her in her servant’s post had each married well. “One is married to a gentleman and keeps a carriage and three servants and give £20 a year to each. She calls here almost every day.” (originally from Samuel Sidney’s Sidney’s Emigrant Journal. Orr. April 19, 1849). Emigration was a quick means for a girl to find a husband, something denied her in a similar position in England. 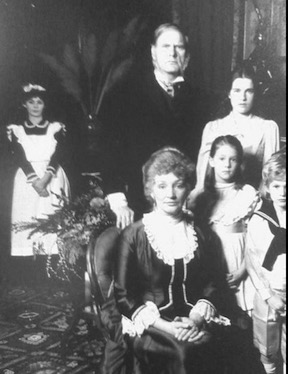 English women servants were in great demand in the U. S. In 1855, The New York Daily Times  (January 20, 1885, quoted in Vere Forster’s Work and Wages. Cash. n.d., p 13 Appendix) conducted a survey of servant girls working on farms in 19 different states. The girls surveyed were paid 75 cents to $2 per week at a time when the British pound equaled four dollars and eighty cents. A prized cook could earn up to $24 per month (about £60 per year). Unlike other territories, English sumptuary laws did not prevail. Wikipedia explains, sumptuary laws as laws that attempted to regulate consumption; Black’s Law Dictionary defines them as “Laws made for the purpose of restraining luxury or extravagance, particularly against inordinate expenditures in the matter of apparel, food, furniture, etc.” Historically, there were laws that were intended to regulate and reinforce social hierarchies and morals through restrictions, often depending upon a person’s social rank, on their permitted clothing, food, and luxury expenditures.

Societies have used sumptuary laws for a variety of purposes. They were used as an attempt to regulate the balance of trade by limiting the market for expensive imported goods. They made it easy to identify social rank and privilege, and as such could be used for social discrimination.  The laws frequently prevented commoners from imitating the appearance of aristocrats and also could be used to stigmatize disfavored groups.

Imagine the surprise of a servant when she learned she was expected to sit with the family for supper and to attend church with them, more so as equals. Moreover, especially those who settled in the West, the opportunity to marry was numerous. Emigrants to the States were advised to have a contract with the servants who traveled with them stating that the servants would remain with them for a stipulated time. (Huggett, 144)

Staff and servants of the Vanderbilts line the road of the North Carolina Biltmore Estate to welcome the newly wed George and Edith Vanderbilt. Photo by Carl Alwin Schenck, courtesy National Forests in North Carolina. The Driehaus Museum

All of that—the pride of a fine servant, a class ceiling, and that sense of permanence—is probably the biggest difference between American and English domestic service in the 19th and early 20th centuries. Though most people come away from Downton Abbey and other pop-culture examples of servanthood in Victorian England with the sense that this was transplanted to America for the Gilded Age nouveaux-riches, it’s not true. Though an attempt was made to emulate English ways as some Americans acquired staggering sums of money and began a lifestyle to match, the systems wound up markedly different from one another. (The Driehaus Museum)

Further, the wealthy Americans—themselves not far removed from humble circumstances—though they needed the servants to keep up their lifestyles, felt extremely proud of the equality possible in this country. Here’s how an 1888 article in the Chicago Tribune put it:

The servant problem is confessedly the most intricate in modern life. It is more intricate in the United States than in any European country. Our boasted democracy comes into the kitchen and claims for the servants rights and immunities never thought of in England or Germany. … Caste solves some of the difficulties of the domestic problem. But it solves them in a way we neither desire nor can make practiceable. We must solve the entire problem in some other way; and that other way must include the recognition of the fact that in this country every woman is just as good as another so long as she conducts herself virtuously. (The Driehaus Museum)

The cook prepares a meal at the Samuel M. Nickerson Mansion. The Richard H. Driehaus Museum.

The wages in Canada were lower than in the U. S. Early on, some mistresses tried to maintain Old World standards, even in the less civilized parts of the country. However, most mistresses shared the household chores with their servants. “As in the United States, the varnishing of floors and the use of a hot-air furnace for heating, obviated tedious scrubbing and the blackleading of countless fireplaces. Servants who lived with Canadian pioneers had to learn some of the skills that only their mothers might have known: sugar-boiling, soap-making, meat-salting, spinning, dyeing, cooking in a bake-kettle or a clay oven.” (Huggett, 144)

Some men also chose to emigrate for better opportunities as a servant. The qualities that would cause a servant to be sacked in England – independence, enterprise, and dislike of pretension and routine – could lead to success in other places, where ingenuity and self-preservation were prized.

2 Responses to Life Below Stairs: English Servants Emigrating to Australia, the U. S., and Canada