Life Below Stairs – The Expense of Keeping Servants

The landed aristocrats were VERY slow to give up the expenses of an extensive household staff. We saw that “plot” being used in the final season of Downton Abbey. It is said that the sixth Duke of Portland employed some 300 servants. Even Queen Victoria kept a separate staff of Indian cooks to prepare her daily curry midday meal.

The fourth Earl of Ashburnham recorded these expenses for his household (via the East Sussex Record Office): £769 for wages and house labourers; £300 for beer for the servants’ meals; £138 on liveries and hats.

From Royal Chef by Gabriel Tschumi (1954, William Kimber Publishing) speaks of an additional 24 French chefs being employed for Queen Victoria’s diamond jubilee. Forty to fifty servants was the norm for the larger landed estates. Believe it or not, the number of indoor male servants defined a man’s status in the world. This delineation was especially important in the Victorian era. At the beginning of Victoria’s reign, a house steward would earn £70 – 80 (while a good housekeeper might earn only £30 – 40). 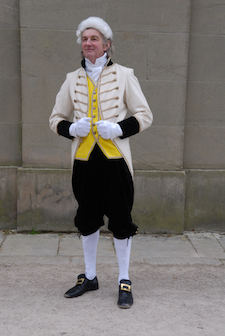 A tax on male servants was legislated in 1777 to help pay for the cost of fighting the Americans in the Revolutionary War. This practice continued during the long years of the Napoleonic conflict. If there eleven or more male servants in a household, the tax was a little over £7 for each. This tax was gradually reduced to 15 shillings by the end of 1869, but it was not abolished until 1937. Needless to say, this tax was a considerable burden on those who saw the need for male servants in their household.

A duty on hair powder (1786 -1869) increased the cost of powdered footmen. The employer also provided the footmen with an allowance of £1 – 2 for the powder. It was common for the footmen to use household flour to save on the costs. Tailored livery for male servants also added to the expense of keeping the servants. Doudneys of Old Bond Street and Burlington Arcade charged 3 guineas for a footman’s livery. Two new suits of clothing were common for each male servant.

Some male servants were done away with by the beginning of Victoria’s reign. For example, the running footman, the male cook, and the sewer. Higher wages, taxes, and additional expenses aided the employers to be rid of these extravagances. According to Frank Huggett’s Life Below Stairs (page 23) from the 1901 Census report we learn, “Although the figures are not strictly comparable, because of changes in methods of classification, the official census of England and Wales shows that the total number was reduced from 74,323 in 1851 to 58,527 in 1891. Only the wealthiest could afford to employ the full range of house steward, footmen, usher, page and ‘tiger,’ plus coachmen, grooms and gardeners. Others, whose income at the beginning of the reign amounted to no more than £1000 or £1200 a year were advised to be content with a single male servant or, they had only £600 or £700, with a footboy.

Employment as a footboy to a clergyman, a lady, or a farmer, whose fortunes did not match their social aspirations, was one of the methods by which a lad could enter service in the first half of the nineteenth century, though it was more common, and usually more satisfactory, to obtain some less ostentatious position on a large estate instead.

‘Footboy’ was often a euphemism for ‘general dogsbody’ or ‘man-of-all-work’, as Henry White [Henry White, The Record of My Life, Cheltenham, 1889, page 59] found in 1837 when, at the age of fifteen, he started to work for Dr Sisson, the rector of Duntisborne, Gloucestershire. In addition to his more formal duties in livery, he was expected to clean the boots and the knives, to do some gardening, to act as ‘groom and coachman’ for the rector’s only conveyance – a humble donkey cart – and, in his spare time, to make himself generally useful! His livery, which had been tailored for him in the neighbouring town of Cirencester, would not have disgraced the footman of a lord. It consisted of a conventional full dress suit of ‘low shining shoes, white stockings, black plush breeches, with bright buckle and buttons at the knees, a brilliant brimstone-coloured waistcoat, covered by a bright sky-blue coat, pigeon-tailed, of course, with stand-up collar, embroidered with two rows of gold braid, and finishing with a set of yellow buttons.’ When he tried it on, he was then summoned to the drawing room where his ‘young mistress was pleased to make some the smallness of my legs, but this, as the Doctor sagely remarked, was an evil which would grow less every day.'”

1 Response to Life Below Stairs – The Expense of Keeping Servants