Life Below Stairs: Rising with the Sun in Victorian England ~ Part I

Posted on February 21, 2020 by reginajeffers

Servants needed to be up and about their business long before the Master and the Mistress. For example, lower servants were up at 5 A.M. and at work minutes later. Most did not waste time in their rooms for they were cold and draughty. Customarily, a half hour deferment was presented to the servants during the winter months, allowing them not to rise until 5:30. They would work some two hours before they sat to their own breakfast.

The kitchenmaid was usually the first downstairs. Her first job was to clean or to blacklead the range and whiten the hearth and build a fire before a kettle could be set to boil. Ranges of the time were either “bright” or “black.” To keep the bright range “bright,” one had to polish it was liberal application of rotten-stone and sweet oil until it shine like a mirror. This mixture was applied by rubbing it on with a leather strip. A bright range had a alternate set of fire-bars for summer use. These cast iron bars were rubbed with mutton fat and wrapped in brown paper during the winter months. 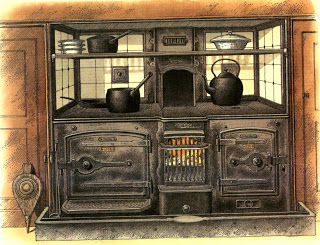 victoriandecorating.blogspot.com The closed range was introduced and was widely available by the 1840’s. A metal hot-plate covered the fire box and had rings for pans and kettles to rest upon.

A black range was one made of cast-iron. The maid placed a cloth before the stove before she raked out the cinders and then swept the dust off the bars, the hobs and the hearth. She would take a piece of black lead (which came in solid block) and mix it with water in a small pan. Then she would apply it with a round-headed brush to all insides of the range. When the black lead dried, it was rubbed until it shined with a special polishing brush, with a little splay of bristles at the top for getting to tight ornamental work. The flues were swept clean once a week. This maid between two and eight shillings per week for her trouble. 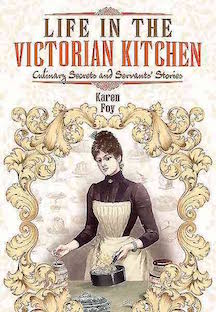 Karen Foy in Life in the Victorian Kitchen (©2014)tells us, “Cooking on a kitchen range was hard work, but those with a range were much more fortunate than the poorer classes, who still cooked over an open grate, but easier options had to be found. By the mid 1800s, kitchen ranges changed dramatically and the graft involved in both using and cleaning them was reduced, greatly improving the everyday life of the cook and the kitchen staff…. Like many other new and innovative creations, a glimpse of what the future might hold for Victorian cooks was witnessed at the Great Exhibition of 1851, where early versions of gas-powered were showcased.”

Servant precedence required that the upper servants rose around 6. The cook was required to prepare four different meals, each of separate dishes – those for the family, those for the servants, and those for the children. Parlourmaids (the Victorian substitute for a butler) set the table for the meal and often cleaned the room. The place setting contained knives, forks, and folded serviette. Rolls, bread, and toast were on platters. There were jars of jam, whole honeycombs, and butter dishes. A jug of cream and a sugar basin was in the middle of the table. Additional cups and saucers were kept at hand. Breakfast included bacon, eggs, kidneys, cutlets, fish, omelettes, and broiled chicken. Some households also served cold meats, such as tongue and ham. Game pies and potted meats might also be served. If no lady’s maid was employed in the household, tending the mistress was an additional duty.

The children’s nurse provided the child/children two to seven mandatory meals/feedings Not all middle class mothers breast fed their babies. Wet nurses filled that duty. Nannies raised the children, who were often “out of sight – out of mind.” The mistress of the house customarily saw their children only during a thirty minutes or so meeting in mid afternoon, around tea time. The nurse’s duties included bathing the babies each morning, administering prescribed medicine and feeding the children. Usually, the child was given a mixture of milk and barley water. Older children also received a bath and nurses assisted in dressing them. Until the age of 7 or 8 boys were laced into stays. Girls wore them throughout their lives. Children customarily ate at 8 A.M. The meal was quite sparse: porridge or break and milk. Perhaps they would receive an egg on Sunday. Their parents had extensive choices for breakfast, and they ate at 9.

For the remainder of the family, maids brought hot water for washing and tea with bread and butter for consumption to tide them over until breakfast. Lady’s maids laced up their mistresses. Then they assisted the women of the household with multiple petticoats, steel-hooped crinolines or horsehair bustles, long drawers or tight pantaloons, and dresses which contained 20 to 40 yards of material. Some parlourmaids even acted as valet for the master of the house.

At 8, the servants (except the children’s nurse) sat to breakfast. The meal was often left overs from the previous evening’s meal. It was not extensive. At about 8:45, the family was summoned to the morning room/dining room. Often beforehand, the family and the servants prayed together or read the Bible together before they went about their days.

1 Response to Life Below Stairs: Rising with the Sun in Victorian England ~ Part I