Life Below Stairs: Compensation Beyond Salary for Work Done

Despite the sometimes less than desirable conditions under which many of those below stairs endured in service, there were other compensations. Servants learned their deference. They were “invisible,” while remaining upon display throughout most of their work days. As such, the learned to anticipate the likely imposition of an unwelcome task or an unpleasant task. Amazingly, they would often disappear into the bowels of the house or they would become engaged in a more pressing duty.

Beyond their wages, many upper servants found means to line their pockets without their masters’ knowing. House stewards would secretly give tradesmen a “cash discount” for the privilege of continued business with the household. The butler, cook, and housekeeper customarily found similar compensations in the purchases made for the household over which they saw. A butler, for example, could claim his share of the wine purchased for the master’s use. A cook might claim the meat drippings to be sold. In Cooking with Jane Austen by Kirstin Owen (page 90), we find, “Emma’s father was a bit daft about one thing though, and that is the frying of anything in the Regency period ‘without the smallest of grease.’ Steaks of all kinds were fried in large quantities of butter – partly to keep them from sticking to the pan, partly for the sake of the flavor, and partly for the sake of the cook, whose perquisites included the right to sell the dripping fat. The more butter she used, the more was ‘left over’ in the pan, and the richer she got.” The groom of the chamber could claim the ends of the candles to resell. Moreover, the taking of “vails” (or tips from guests) became a common practice.

A guest at a country house could expect to leave a variety of tips for his host’s servants. The housemaid (several silver coins), the groom of the chamber (several silver coins), the butler (sovereign), the footman (sovereign), the gamekeeper (a couple of guineas), etc. In English Notebooks, Nathaniel Hawthorne (page 439, Paul Kegan, 1894) complained of parting with several shillings to compensate the housekeeper of Lord Byron’s home of Newstead Abbey in 1857. In some houses in the early 1800s, servants actually lined up expecting their due upon the guest’s departure.

The guests who were less forthcoming “paid” in other ways. A dog cart might be sent to retrieve a guest from a public conveyance. Their requests were ignored or were delayed. A less desirable room might be set aside for the person or at a “shoot,” he would be ill-placed. 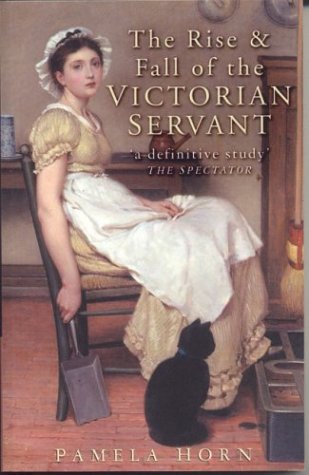 4 Responses to Life Below Stairs: Compensation Beyond Salary for Work Done