The Practice of Enclosure of Open Lands in England and Wales

In England and Wales from the 12th Century forward enclosure (or inclosure) was a common practice. Before enclosure, much of the land was only used during the growing season. Once the harvest took place, the was at the disposal of the community. People grazed their livestock freely upon the land. They also found other uses for it. Enclosure occurred when someone, usually the manorial lord, put up a fence or a hedgerow to separate open land and the land the lord chose to claim. This prevented common grazing rights. 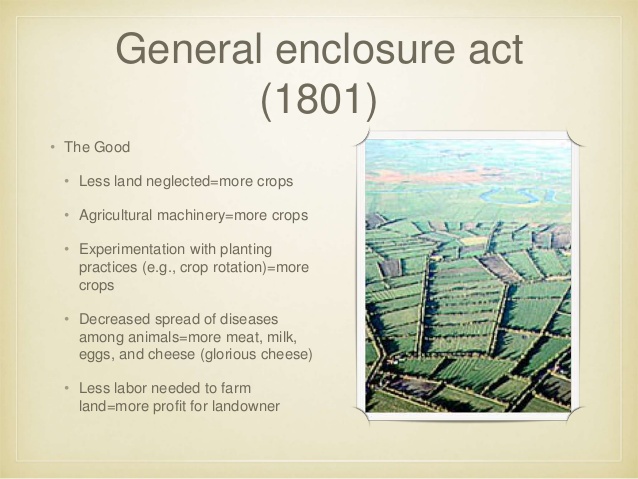 The article on enclosure on Wikipedia says, “Enclosure (sometimes inclosure) was the legal process in England of enclosing a number of small landholdings to create one larger farm. Once enclosed, use of the land became restricted to the owner, and it ceased to be common land for communal use. In England and Wales, the term is also used for the process that ended the ancient system of arable farming in open fields. Under enclosure, such land is fenced (enclosed) and deeded or entitled to one or more owners. The process of enclosure began to be a widespread feature of the English agricultural landscape during the 16th century. By the 19th century, unenclosed commons had become largely restricted to rough pasture in mountainous areas and to relatively small parts of the lowlands.

Enclosure could be accomplished by buying the ground rights and all common rights to accomplish exclusive rights of use, which increased the value of the land. The other method was by passing laws causing or forcing enclosure, such as Parliamentary enclosure involving an Inclosure Act. The latter process of enclosure was sometimes accompanied by force, resistance, and bloodshed, and remains among the most controversial areas of agricultural and economic history…. During the Georgian era, the process of enclosure created a landless working class that provided the labour required in the new industries developing in the north of England.” 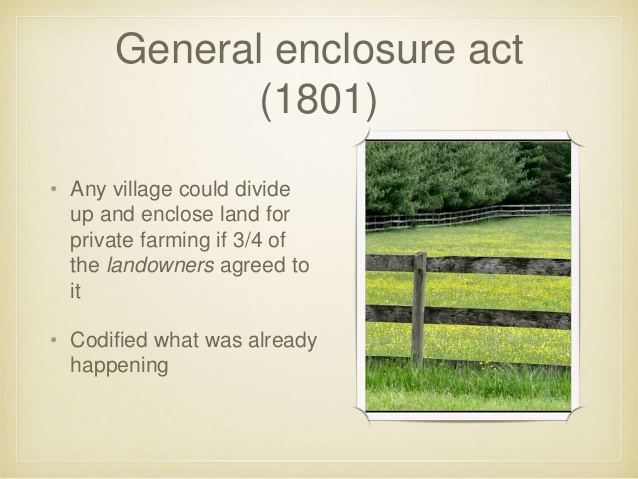 The movement for enclosure spread quickly from the mid 1400s to the mid 1600s. This process increased the full-time pasturage each manorial lord claimed. Common rights had included not just the right of cattle or sheep grazing, but also the grazing of geese, foraging for pigs, gleaning, berrying, and fuel gathering. During the period of parliamentary enclosure, employment in agriculture did not fall, but failed to keep pace with the growing population.From 1750 to 1860, the idea of enclosing the open land turned from manorial concerns to that of “agricultural efficiency.” The problem was how the open fields kept the agricultural fields low. There was no incentive for a man to improve his land with fertilizer or proper drainage. Such “foolishness” would only result in those who used the open land after the harvest repeating the benefits of a more productive field without paying any of the expenses. 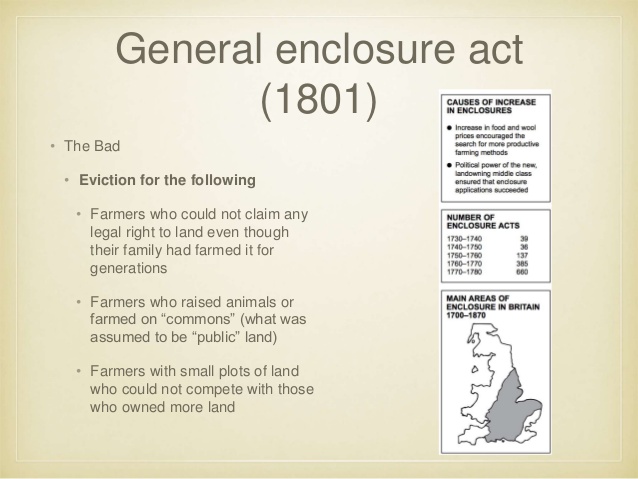 Alan Taylor tells us from an article on Facebook found in the British History: Georgian Lives Group, “Enclosure of common land was a process which produced much resentment by the rural poor who often depended on this land for grazing of cattle, horses etc and collection of firewood. Enclosure began in Elizabethan times as the old medieval manors were dismantled and replaced by fenced and walled fields owned by Freeholders or Copyholders who still paid homage to the Lord of the Manor. The effect of this major change in English landscape, accelerated in the 18th and early 19th Centuries by a series of Acts of Parliament, is usually only recorded by the literate new landowners who would benefit from the changes. Thus in a letter sent by a John Parker in 1812 he refers in a matter of fact way to an enclosure in a Manor in Essex: ‘ My son Comyns took a very active part as to the enclosures of the Common, it passed off extremely well, the Copyholders..appeared very well satisfied with their Allotments’. There is no sympathy here for the poor of the Manor who would have suffered greatly!

“Occasionally however rebellions took place against this loss of privilege. One such example was recorded in a letter of 1796 sent by a Thomas Swinnerton of Butterton Hall near Newcastle under Lyme. The letter was addressed to the agent of the Bishop of Lichfield who was Lord of the Manor in which Thomas had his estate. In the letter Thomas complained about a rebellion that had taken place when he decided to enclose common land adjoining the ‘green lane’ which ran through his property explaining why he had done so: ‘the great object of the enclosure..was to prevent the building of a Workhouse or the converting of..the land into Gardens for the Poor’. However the ‘poor’ had rebelled and convened a Manorial Court at a local pub during which : ‘the landlord..where the Court was held was a most principal party in exciting & encouraging the Mob to destroy the inclosure & …on return of the Mob gave them ale’.. Another agent provocateur was apparently ‘a man who hires out horses which may be found..in the night in the inclosures’. Again there was no sympathy at all for the poor some of whom were destitute needing accommodation and land to grow food. They had invoked an ancient custom by convening a Manorial Court at which their grievances could be aired but understandably this had ended in violence. I do not know whether the Bishop took any action as a result of this letter but the draft reply sent by his agent seemed more sympathetic to the ‘Mob’ than to Swinnerton!!”

The British Industrial Revolution: An Economic Perspective by Joel Mokyr

Efficiency, Equity and Agricultural Change with Special Reference to Land Tenure in Western Europe by G. H. PETERS AND A. H. MAUNDER