Easter During the Regency 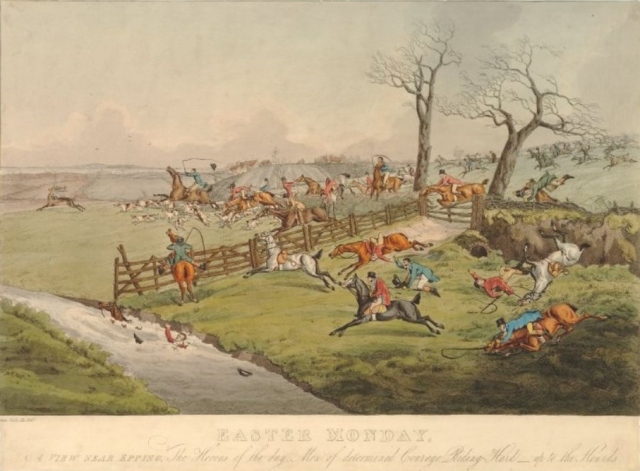 The Epping Hunt, or the ‘Cockney Hunt’ was traditionally held on Easter Monday. https://georgianera.wordpress.com/2015/03/31/an-early-19th-century-easter-miscellany/

According to many sources, for many years during the Regency (1811-1820), Parliament did not open its first session of the year until after Easter. But the list of dates, I have included below, contradicts that idea somewhat.

Generally, the new Season for young ladies to make their Come Outs and the doings of the Marriage Mart were closely associated with Easter. We must remember that for England during this period in history, Easter and Lent were still considered a religious celebration, and, although people had gotten away from the stricter celebration of years past, Lent, for example, was more closely observed than we find today. People refrained from eating cakes, pastries, dairy, fats, as well as avoided “meat” on Friday.

Even when Parliament resumed early, the official London Season did not begin until after Easter Sunday.

Donna Hatch’s Blog tells us, “The day before Lent began was Shrove Tuesday, a day to confess sins to one’s priest (or to get “shriven”). According to Regency researcher and author, Regina Scott, it was also a day they referred to as “pancake Tuesday,” the last opportunity to eat all the foods forbidden during Lent. The custom might have begun as a way to use up any of these foods one had in the house so they wouldn’t spoil. Other cultures used their last day of anything goes to create events such as Mardi Gras and Fat Tuesday.

“In England, a host of games accompanied Pancake Tuesday, including pancake races (flipping a pancake in a frying pan while running) and Street Foot Ball, or Hurling, which is a cross between soccer and American football. You can read more about those games here.”

Easter during the Regency:

In the  early years of the 19th century, the date of Easter was quite important. Law courts, parliament, schools  — as well as the church calendar all based dates on that of Easter. Generally, the season in Town didn’t start until after Easter.

Even the theatres chose to acknowledge the Holy Season. Oratorios, rather than dramas, could be found, and the theatre district was, generally closed between Palm Sunday and Easter. Easter Monday and Tuesday were government holidays. The

Maundy Thursday (also known as Holy Thursday, Covenant Thursday, Great and Holy Thursday, Sheer Thursday, and Thursday of Mysteries, among other names) is the Christian holy day falling on the Thursday before Easter. It commemorates the foot washing (Maundy) and Last Supper of Jesus Christ with the Apostles, as described in the canonical gospels. Many theorize that the English name “Maundy Thursday” arose from “maundsor baskets” or “maundy purses” of alms which the king of England distributed to certain poor at Whitehall before attending Mass on that day. During the Regency, the Regent, acting in his father’s, George III’s, stead presented food and tunics to the poor.

Jane Austen’s World tells us, “In her book, Jane Austen and the Clergy, Irene Collins writes: Clergymen in Jane Austen’s day were not expected to write original sermons every Sunday. “Henry Crawford, assessing Edmund Bertram’s commitments at Thornton Lacey, judged that ‘a sermon at Christmas and Easter ‘would be’ the sum total of the sacrifice.” Mr. Collins produced only two sermons between his ordination at Easter and his visit to Longbourn in November of the same year.- p. 96.

“Jane Austen herself mentions Easter, most notably in Pride and Prejudice:

In this quiet way, the first fortnight of her visit soon passed away. Easter was approaching, and the week preceding it was to bring an addition to the family at Rosings, which in so small a circle must be important. Elizabeth had heard, soon after her arrival, that Mr. Darcy was expected there in the course of a few weeks, and though there were not many of her acquaintance whom she did not prefer, his coming would furnish one comparatively new to look at in their Rosings parties, and she might be amused in seeing how hopeless Miss Bingley’s designs on him were, by his behaviour to his cousin, for whom he was evidently destined by Lady Catherine; who talked of his coming with the greatest satisfaction, spoke of him in terms of the highest admiration, and seemed almost angry to find that he had already been frequently seen by Miss Lucas and herself.

“Ellen Moody noted that dating Sense and Sensibility presented a problem. It was revised several times and as a result the chronology remains inconsistent. Towards the book’s end, Easter is mentioned as occurring on March 31. This would have fallen in 1793, when the first draft of the novel was written. But, there is another reference to Easter in early April, which would have placed the novel in 1798 (the most likely), 1801, 1803, and 1809.”

The Regency Redingote Blog speaks to the superstitions of Easter in 1818, a fact I found absolutely fascinating. “In 1818, Easter Sunday fell on 22 March, the earliest possible date on which Easter could occur, based on the formula laid down by Christian fathers. This was just one day after the vernal equinox, as the first spring full moon coincided with both observances that year. Most people during the Regency, of all Christian sects, were well aware that this was the very earliest date on which Easter could fall. Many of them were also aware that Easter would not occur that early again for another 467 years, since Easter would not fall on 22 March again until the year 2285. [Author’s Note:

“This very early Easter date created a rare coincidence which some people believed was a strong portent of some serious misfortune which would befall England. This coincidence not only caused Easter Sunday to fall very close to Lady Day, it actually caused Easter to come three days before Lady Day (25 March). (A very ancient tradition held that the Crucifixion took place on 25 March, the same date as Lady Day. Though this specific date is not recorded in scripture, there were many in England who were aware of the supposed date.) A doggerel couplet which was well known during the Regency captures the attitude of many people toward the fell portent of the juxtaposition of Easter and Lady Day:

When my Lord falls in my Lady’s lap,
England, beware of some mishap!

“Though no significantly terrible things took place in Britain in the spring of 1818, quite a number of highly superstitious people believed that this very close Easter Sunday/Lady Day occurrence was directly responsible for the death of Queen Charlotte, on 17 November of 1818. It must be noted that Queen Charlotte celebrated her seventy-fourth birthday, in May of 1818, and she had been in failing health since the unexpected death of her beloved granddaughter, Princess Charlotte, in early November of 1817. Even so, there were some very superstitious people who were convinced this early Easter, in close conjunction with Lady Day, hastened the Queen’s passing.”

Sources and Other Interesting Articles Worth Sharing:

2 Responses to Easter During the Regency