How Do We Know Jane Austen’s “Stuff” Actually Belongs to Her? a Guest Post from Collins Hemingway

This post originally appeared on Austen Authors on March 21, 2019. Enjoy!

A few weeks ago, Alexa Adams, one of our Austen Authors, wrote an interesting blog on the Rice portrait, which is believed by some to be a painting of a youthful, vibrant Jane Austen. Alexa was following up on an article in the Guardian newspaper claiming that a letter from Jane’s great-niece finally proves the painting is of Jane.

The newspaper article, and Alexa’s blog, brought a joyous reaction from many Janeites, who hoped that we finally have a good portrait of the author’s face. The puffy, dour image that “graces” the new ten-pound note and most books on Austen was not believed to be a good image of Jane by those who knew her. Alexa’s blog also received supportive comments from a member of the Rice family and from Ellie Bennett, a researcher who strongly supports the Rice claim. It also brought a not-so-fast response from a grumpy old man, namely me.

My point was not that the Rice family is wrong but that the evidence remains divided at best. I’d be tickled to death if the image of this animated and bright teenage girl is of our Jane. At present, the most knowledgeable Austen scholars and painting experts dispute the provenance of the Rice painting. In fact, in 2016 when I blogged about what Austen looked like, I did not even mention the Rice portrait because so many experts were lined up against it.

Nor am I here today to rehash that argument. Alexa’s blog has several good links, the comment section has a good back-and-forth, and a search on “Jane Austen Rice portrait” will lead to many more articles pro and con. (The Rice family has a website dedicated to their claims; the Guardian has more stories both positive and negative, Austen scholars weigh in, etc.)

My point was that with anything related to Austen, or any important historical figure, the provenance of an object must be significant and largely undisputed. This is because of the need for historical truth, of course. And for the emotional response when people believe an object is related to a certain figure. If we’re going to practice an innocent form of idolatry with “religious” relics, they ought to at least be real. The love of Austen is so powerful that both regular Janeites and Austen scholars wear modern reproductions of her turquoise ring on their fingers.

The issue also got me thinking about provenance. What should we expect in the way of accuracy with regard to historical objects? Is it enough that something “probably” or “likely” or “could have” belonged to Jane Austen (or William Shakespeare or Charlotte Brontë)? Should the information supporting the claim be something like a “preponderance of evidence,” which is used in civil cases? Should it approach the level of “beyond a reasonable doubt,” which is used in criminal cases? Must the object’s history meet the forensic quality of an “unbroken chain of custody” required in criminal cases? (This legal requirement ensures that evidence is not tampered with anywhere along the way.)

There are not many objects coming down from Jane. The provenance for Jane’s ring (above, by headline) is very, very good. It came with a note from 1869 listing the successive owners. This information was provided by the auction house when it was sold:

American rock star Kelly Clarkson bought the ring at auction in 2014. The resulting uproar led to private donors in England raising the money to keep it within the country. It is now on display at Jane Austen’s House Museum (JAHM) in Chawton. It might be possible to claim that another ring was substituted over the years, but it appears that the jewelry was a beloved remembrance of Jane and Cassandra from the earliest days and the family has cared for it for 240-plus years.

Another Austen item is the two topaz crosses given by Charles Austen to his sisters Jane and Cassandra with naval prize money in 1801. According to JAHM, the provenance of the crosses is significant but not as clear-cut as it is for the ring.

The crosses were  presented to the Jane Austen Society (UK) by an American professor, Charles Beecher Hogan, in 1974, following his address at the AGM. Hogan was an expert on Austen and a collector of Austen first editions. He had purchased the crosses, along with Jane’s letter about them, from a bookseller. He gave them to his wife, CC, as a wedding present. When they visited renowned Austen scholar R. W. Chapman, his first words to her were: “In case of divorce the crosses and letter stay together.”

The two crosses are now at JAHM, on loan from the Society, along with the Jane Austen letter of 26-27 May 1801 in which they are mentioned. This is the letter in which, writing to Cassandra, Jane playfully admonishes their youngest brother Charles for spending his prize money on gifts to his sister. “He must be well-scolded,” she says.

When Hogan announced his donation of the crosses to the Jane Austen society, he casually pulled them out of his pocket to wow the audience. No heavy security here! The museum has a letter from Hogan to Sir Hugh Smiley that states: “I bought them (the crosses) a great many years ago, along with the letter that corroborates them. The bookseller told me that he had acquired them from a member of the family of Charles Austen, the original donor.” 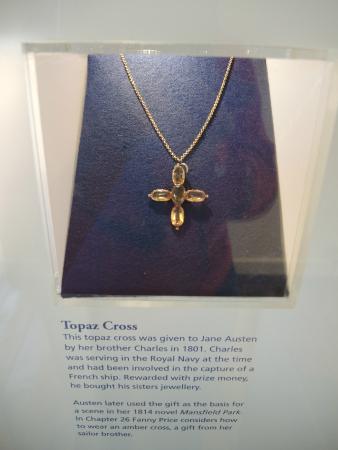 There’s not, technically, an unbroken chain of references for the crosses, nor apparently any written authentication from the family member who sold it. However, the fact that it comes with the original letter in which the crosses are mentioned is also “probative,” as a lawyer might say—providing proof.

It’s also noteworthy that the crosses came to Hogan via Charles’s family. It would have made sense that Cass, who survived Jane—and like Jane was childless—would have bequeathed the crosses back to one of Charles’s descendants. Cassandra destroyed most of Jane’s correspondence, but the letters she kept were given back to the family members whom they involved. For example, Jane and Cass wrote each other regularly when one or the other was staying with their brother Edward’s family at Godmersham in Kent. Cass left a large selection of those letters to Edward’s daughter, their niece Fanny. This correspondence was eventually published by her son, Lord Brabourne, in 1884. These letters, plus several others previously published in the family Memoir of 1870 by the Steventon branch of the family, form the core of what now totals 161 known Austen letters.

With the topaz crosses, we have a contemporary reference to the topaz crosses as gifts in Jane’s letter—in her handwriting. After the death of Jane and Cass, we have two crosses that match the description of the simple topaz crosses ending up in Charles’s family. We also have a photo at JAHM of one of the Austen descendants wearing what appears to be the shorter, “fatter” cross of the pair. For many years, it was thought to be Martha Lloyd, the lifelong friend of Jane and Cass who eventually married their brother Frank. Thus, Martha may have received the cross first, after Jane’s death; further, that meant the “short, fat” cross was Jane’s. However, it was discovered a couple of years ago that the photo had been made with technology that did not exist until after Martha’s death, so the woman was a later relative. This fact means that the museum now has no way of knowing which cross belonged to which sister—the shorter, fatter cross and the longer, slimmer cross.

In summation, the provenance of the crosses has a clear starting point in 1801 from Charles in Jane’s own hand. Both the crosses and the original letter “corroborating” the crosses came down through Charles’s family. We have them being sold to and through a bookseller specializing in Austen material, which is a logical connection, to an expert in Austen. The price is not known, but Jane was not the rock star that she is today. It likely was not ridiculously high.

Jane’s ring shows an unbroken chain of possession through the family descendants. The provenance of the crosses begins during Jane’s life, but there are also “gap years,” when the ownership is not documented. The assumption is that it stayed in the family until being sold to the bookseller. If that’s true, it’s likely that no one bothered to write down each handoff. Having the original letter in which Austen herself mentions the topaz crosses, the family may not have felt any more proof was necessary.

It seems that the information supporting the crosses meets the standard of a “preponderance of evidence.” Do we have enough information to believe there was also an “unbroken chain of custody”? Would that matter here, since we also have the corroborating letter? Should we require the evidence to be “beyond a reasonable doubt”? Do the topaz crosses meet that requirement?

The Trilogy is also available in a single “boxed set” e-book: