Posted on March 1, 2019 by reginajeffers

In 1794, a fire in East London’s Ratcliffe district of London proved to be the largest to occur between the Great Fire of 1666 and the Blitz of 1940.

The Ratcliffe Highway Murders served as a model for my highly acclaimed mystery, The Prosecution of Mr. Darcy’s Cousin. In the years leading up to the fire, Ratcliffe was known for shipbuilding and the industries surrounding that activity. Ratcliff or Ratcliffe is was a hamlet lying by the north bank of the River Thames between Shadwell and Limehouse, due south of Stepney village. The name Ratcliffe derives from the small sandstone cliff that stood above the surrounding marshes, it had a red appearance, hence Red-cliffe. It was far from a being a pristine area. Located on the edge of Narrow Street on the Wapping waterfront it was made up of lodging houses, bars,  brothels, music halls and opium dens. This overcrowded and squalid district acquired an unsavoury reputation with a large transient population.

Ratcliffe in the late 1700s contained warehouses for imported goods, especially those associated with the manufacturing industries lining the Thames. Ratcliffe was reported to have specialized in the storage of combustible cargoes, considered too risky to be bulk-handled in London proper.  Needless to say, that was the area’s downfall in this matter. The conflagration that followed destroyed over 400 homes and 20 warehouses and left 1000 people homeless. Following the fire tents were set up near to St. Dunstan’s Church whilst the area was rebuilt.

According to Historic UK, at “3pm on 23rd July, an unattended kettle of pitch boiled over at Clovers Barge Yard, Cock Hill setting it on fire. These flames quickly spread to a nearby barge loaded with saltpetre, a substance used to make gunpowder and matches. The barge exploded violently, scattering burning fragments in all directions. Fires spread to the north and the east, consuming timber yards, rope yards and sugar warehouses.”

“Narrow streets and a low tide hampered fire fighting, and within a few hours the fire had destroyed 453 houses leaving 1,400 people homeless and displaced. The government erected tents as temporary shelter near St. Dunstan’s Church, whilst the Corporation of London, Lloyds and the East India Company contributed almost £2,000 to the relief of the homeless.” 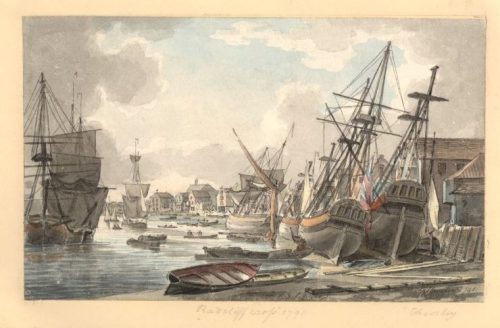 The Wicked William website adds these details: “It began at Mr Clove’s, a barge-builder at Cock Hill, and was occasioned by the boiling over of a pitch kettle that flood under his warehouse, which was consumed within a very short time. It also set light to a barge (it being low water) lying close to the premises, laden with saltpetre – which subsequently spectacularly exploded. The blowing-up of the saltpetre occasioned large flakes of flame to rain down upon riverside buildings – one of which belonged to the East India Company, from which a store of saltpetre was in the process of removing to the Tower of London – 20 tons of which had been fortunately removed the preceding day. Consequently the fire wrought carnage both on land and river – and very soon all the houses on either side of Brook Street were destroyed as far as Ratcliff Cross, as well as several alleyways – and several large ships, including the East Indiaman Hannah, which was about to depart for Barbados, and other smaller boats were utterly burnt out. The fire found new fuel at Ratcliffe Cross when it over-ran a sugar-house. This new ignition point meant that the adjacent glassworks and a lighter-builders yard were lost.

“The blaze continued until the following morning and its progress was helped mainly by the narrowness of the streets, which prevented fire engines being of any practical service. The wind blowing strong from the south fanned the flames onwards: it reached the premises of Joseph Hanks, a timber merchants, in London Street and extended on into Butcher Row – the whole of the west, and part of the east side of which was consumed. At Stepney Causeway the fire caught the premises of Mr Shakespeare, a rope-maker, and burnt through to the fields at the other side before dying down. It was only the boundaries of urban development that prevented further progress of the inferno. Almost no property in the vicinity was spared loss or damage, though it was singularly odd that the dwelling house of Mr Bere – a very extensive building – was surrounded by fire but emerged entirely unscathed.”

Interestingly, only one building survived the Ratcliffe Fire of 1794; No. 2 Butcher’s Row, marked its location on the map below.