Welcome to Gunter’s Tea Shop, Where the Fashionable People Congregate

Posted on February 1, 2019 by Regina Jeffers

According to Historic Food, “The first record of ice cream in this country is from 1671. It was on the menu of a feast for the Knights of the Garter held in St. George’s Hall at Windsor Castle. However, at this time it was such an exclusive dish that it appeared only on the king’s table. The earliest printed recipe appeared in Mrs Eale’s Receipts, a little work on confectionery published in London in 1718. Mrs Eales claimed to have been confectioner to Queen Anne, during whose reign ice cream continued to be a luxury enjoyed only at court and by the nobility. It was not until the second half of the 18th century that ices become more widely available from confectioners’ shops.”

Gunter’s Tea Shop was originally called The Pot and Pineapple.It was located at Nos. 7 -8 Berkley Square. Italian pastry chef, Domenico Negri established it in 1757. The “pineapple” was chosen as part of the name for it symbolized luxury, and pineapples were a common ingredient used in confections. The shop sold English, French, and Italian wet and dry sweetmeats. Custards, cream ice, frozen mousses, jellied fruit, candies, syrups, biscuits, and caramels were served. Some of the cream ice flavors include chocolate, lavender, maple, Parmesan, Gruyere cheese, and bergamot. Mousses were often vanilla, saffron, and pineapple.  For more information on sweetmeats, chocolate, and ice cream in Regency England, go HERE. Gunther’s seems to have served their individual ices in glass dishes. I particularly love this site that gives LOTS of details on flavor of the ices, making the ices, history, etc. Georgian Ices. 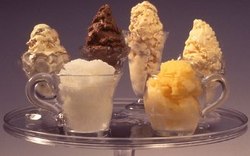 During the Regency, the ice was less important that going to Gunther’s and being seen. It was a social experience. So, no one would have gone there for a single ice and then taken it away. Gunther’s does appear to have had wait staff that would bring ices to a party parked in a carriage nearby, then collected the empty glasses later. They seem to have done the same for those who wished to enjoy their ices outdoors rather than in the shop. This entry from the Encyclopedia of London tells us: “A custom grew up that the ices were eaten, not in the shop, but in the Square itself; ladies would remain in their carriages under the trees, their escorts leaning against the railings near them, while the waiters dodged across the road with their orders. For many years, when it was considered not done for a lady to be seen alone with a gentleman at a place of refreshment in the afternoon, it was perfectly respectable for them to be seen at Gunter’s Tea Shop.”

James Gunter became Negri’s business partner in 1777, and by 1799, Gunter was the sole proprietor.  During the Regency and throughout the 19th and 20th centuries, Gunter’s was considered a fashionable light eatery in Mayfair, well known for its ices, sorbets, and confections.  From the business, Gunter purchased a mansion in Earl’s Court.  Gunter’s son Robert took over his father’s business after James’s death in 1819. At his father’s suggestion, Robert had studied confections in Paris. Eventually, Gunter’s cousin John became a partner in 1837, assuring the business would remain in the family.  William, another of James’s sons published a cookbook, Gunter’s Confectioner’s Oracle, in 1830.  His book was said to be filled with gossip, namedropping and a terrible dictionary of ingredients, as well as recipes.  He began his cookbook with a dream he had of being led to a banquet by a witch. He supposedly “told all,” but in his alphabetical dictionary of raw materials, he “skipped B because it ‘is to us an empty letter.’ C was a fourteen-page treatise on coffee, in French … The dictionary skipped D and E. The letter F was for flour. Then Gunter wrote, ‘I now skip a number of useless letters until I arrive at P.” – Of Sugars and Snow: A history of ice-cream making, Jeri Quinzio, University of California Press, 2009, p. 65.

There were also famous apprentices who worked at the shop and went on to write their own cookbooks.

Gunther’s does appear to have offered a catering service, which was very popular with those planning parties. When ices were ordered for an affair at a private home, from what I can tell, the ice mixture was left frozen in the container in which it was made, usually a metal bowl or cylinder. These containers might have a matching metal cover or simply be covered with a layer or two of oil cloth tied on with twine. These containers were packed in large baskets, layered with enough straw and ice to keep them cold for the expected length of time until they would be served. Once the event was over, the containers, the baskets, and probably the straw, were all retrieved by someone from Gunther’s.

Via Jane Austen’s London, we learn, “(From a Correspondent)  Mrs Morton Pitt’s Masquerade (from The Morning Chronicle, 16 June 1801) –

“Mrs Morton Pitt opened her house in Arlington-street, for the first time, upon the debut of her beautiful and accomplished daughter in the beau mond: this of course attracted a most brilliant and dazzling assemblage of all the fashionable world; and, whether from the condescending manner of the beautiful hostess, or the high glow of spirits which universally reigned throughout the whole company, the writer protests he has not, in the career of fashion of this year, seen so much conviviality. The supper was such as everyone must expect, when they hear that Mr Gunter, of Berkeley-square, superintended in that department.’

“He did not cater only within London. On 25 August 1804 The Morning Post reported, in its Fashionable World column:

“’Lady Smith Burgess’s Fete at Havering Bower in Essex…about 200 of the neighbouring nobility and gentry, and many others from town were present…. About five o’clock [in the afternoon] the company…returned into the Saloon, where a most sumptuous Breakfast was set out. The entertainment consisted of every delicacy which the munificence of her Ladyship could provide, and the taste of Mr Gunter, the confectioner, could display.’ 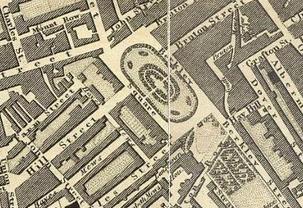 When the east side of Berkeley Square was demolished in 1936–7, Gunter’s moved to Curzon Street. The tea shop closed in 1956, although the catering business continued for another twenty years. Gunter’s was also known for its catering business and beautifully decorated cakes. In 1811, the Duchess of Bedford’s and Mrs. Calvert’s ball suppers featured the shop’s confectionery, a tradition followed by many a society lady. Along with Bolland’s of Chester and W G Buszard, Gunter’s were considered to be the wedding cake makers du jour and made the bride cake for the marriage of Queen Victoria’s Granddaughter Princess Louise of Wales in 1889.

11 Responses to Welcome to Gunter’s Tea Shop, Where the Fashionable People Congregate