A Closer Look at “One Minute Past Christmas” by George T. Arnold and Regina Jeffers

Posted on December 12, 2018 by reginajeffers 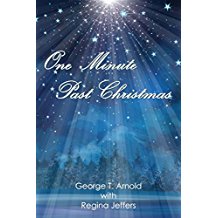 I came to this story late in the aspect that the nucleus of it was written by my former journalism professor. When I read it, I liked it, but I had the feeling that something was missing. Even so, I kept my mouth shut on the subject for some two years. When he decided to add a new cover and post the story on other seller sites (other than Amazon), I suggested that we work on the story together. That is how it came about.

When George Arnold originally wrote the story, it involved a grandfather telling his granddaughter the family secret. I changed the story so said granddaughter is now a grandmother herself and sharing that same secret with her granddaughter. We kept all of George’s scenes, making them flashbacks. By doing so we had a three-dimensional story: Layers on layers, but all tied together by this special “secret.”

The story is a contemporary one, set in West Virginia, as both George and I are West Virginia natives. It is set around his hometown of Beckley, a town set on two interstates, I Interstate 64, going east and west and Interstate 77, going north and south. The family in the story owns a tree farm, one that has been in the family for multiple generations.

If you are looking for a quick, easy read that will restore your faith in the spirit of Christmas, this is the story for you. It is a novella of some 20,000 words. 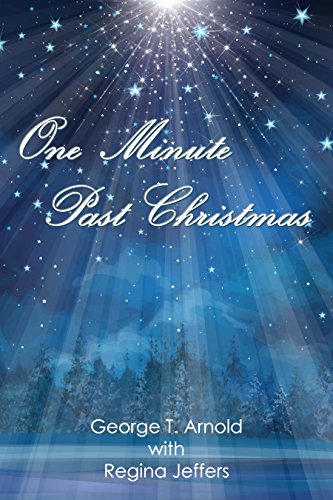 Introducing One Minute Past Christmas

One Minute Past Christmas is the story of a Greenbrier County, West Virginia, family in which a grandfather and his granddaughter share a special ability — they call it a gift — that enables them to briefly witness each year a miraculous gathering in the sky. What they see begins at precisely one minute past Christmas and fills them with as much relief as it does wonder. But they worry that the “gift” — which they cannot reveal to anyone else—will die with them because it has been passed to no other relative for forty-four years.

Enjoy this excerpt from “One Minute Past Christmas”

She climbed the steps to the attic a bit more slowly than she did previously. Jessica claimed her sixty-fifth birthday in September, and even though both the Nicholas and Lawrence families traditionally lived well into their late seventies and early eighties, Jessica could not shake the idea that her days were shorter than she hoped.

“Where to look?” she murmured as she pulled the chain to turn on the bare overhead bulb to illuminate the space once used as a drying room, but which now held the family “treasures.”

Hanna joined Jessica to look around in bewilderment.

“I did not realize there were so many boxes.”

“Several lifetimes chronicled here,” Jessica said as she scanned the markings on the side of many of the boxes.

She turned slowly to inspect the many configurations.

“You used to like to play among all the boxes,” Jessica reminded her granddaughter. “We made castles for you to crawl through.”

“Really?” Hanna asked in surprise, and Jessica could not disguise her scowl of disapproval.

“I don’t wish to think upon the values you lost by movin’ away from your family home,” she pronounced in chastisement. “Yes, your father found a viable position, but your family abandoned so much more.”

“Oh, Gram, don’t be going there again. Papa is accounted one of the best mechanics in the area. He has fifteen men working for him.”

Her granddaughter rolled her eyes in the way of all young people who think they know everything.

Discarding her frustration with what she could not change, Jessica gestured toward several rows of boxes against the far wall.

“You look over there. I’ll take this side. The boxes are labeled, but it wouldn’t hurt to take a peek into each to make sure the contents match the labels.”

“Do you think there are mice in here?” Hanna asked tentatively.

Her granddaughter lifted a box from the top of the stack to investigate the inside.

“You know nothin’ of livin’ in the country,” Jessica remarked as she adjusted her glasses upon her nose so she could read through the bifocals.

“Your grandfather and I have three of the best mousers in the county. Nothing gets past those cats.”

“I thought you kept the cats because they were treasured pets,” Hanna said in distraction before searching through the first box.

Jessica thought, Not likely, but she said, “No. The cats earn their keep.” Like everyone on this farm.

Silence fell between them as they searched. Hanna made quicker work of the task than Jessica. Reminiscing over one of Jeremy’s toy trucks or a favorite picture frame belonging to her mother required time. Recollections required time. Her grandfather Jared Nicholas taught Jessica that time only bent for those God granted a miracle. When Hanna was born, Jessica thought to teach her granddaughter something of the magic, but Jeremy and Molly snatched the child away from Jessica before she could show the girl what made the child one of God’s chosen beings.

“Any luck?” Hanna called out.

“Not yet,” Jessica murmured as she caressed each of the precious items before returning them to the box.

Hanna stood to scan the stacks.

“Do you recall anything of how the dress was put away?” the girl asked.

Jessica watched Hanna work her way behind what appeared to be an artificial Christmas tree box along the wall.

“I recall now,” she said before crossing the small space to spin the box meant for a fake tree around where she could tear away the tape holding it closed.

“There is no need for an artificial tree on a Christmas tree farm,” she declared. “My mother thought it a good joke to store a family heirloom in a hoax of a box.”

Stripping the masking tape away, Jessica placed the box upon the floor and opened the flaps.

Jessica lifted the garment bag, which was closed at the bottom with more tape to keep moisture and air from ruining the dress.

“There are mothballs in the box,” she said with a laugh. “We may need to air the dress out.”

“I imagine my mother covered the hanger before returning the dress to it. My mama, bless her soul, was most particular about the gown. It was the most expensive dress anyone in the family ever owned. I think her cautions and her protestations nearly persuaded your mama not to marry our Jeremy.”

“Will you be as crazy with my wearing it?” Hanna asked half in a tease and half in fear.

“Count on it,” Jessica said smartly as she lifted the dress from the bag.

Beneath the heavy garment carrier was a dry cleaning bag covering the gown and its layers of soft lace.

“Thanks for the warning,” Hanna retorted in what sounded like cynicism.

The girl reached for the bottom of the bag and lifted the plastic to reveal a dress with all the glamour of the 1920s.

“It is like something right out of The Great Gatsby,” Hanna gasped. “It is perfect. We can do the wedding as if it’s high tea in the Hamptons.”

“We must check all the seams. The lace has yellowed a bit, but not enough to hurt the look of the dress. We may need to find some replacement lace for the sleeves, but matching it shouldn’t be too difficult. It’s a common rose-and-ivy pattern. I do not want you to think of making this a flapper look. My mama and my grandmother would roll over in their graves. Grandma Lily ordered this dress special, based on a picture of her mother’s wedding dress in the old country. Grandpa Jared spent his last penny to please Lily Hardwick. During their first few years of marriage they had nothing to live on but love, but that was enough. Even later, during the Great Depression, they never considered selling the dress or the lace.”

“I promise I’ll treat it properly,” Hanna swore, crossing her heart with her index finger.

“I’ll return the dress to the bag, and we’ll take it downstairs for a closer look. Later, we’ll go into town for lace and whatever else we might need.”

Jessica reached for the box.

“Help me set the empty carton from the way.”

Jessica thought it ironic that the prospects of wearing her great-great-grandmother’s dress brought a return of Hanna’s manners.

“What’s that?” Hanna asked as she lifted the box to hear a thud hit the floor a second time.

Jessica draped the bagged dress over the back of a chest of drawers, which should be donated to one of the shelters, before she knelt to dig into the bottom of the tree box.

“Well, I’ll be,” Jessica swore with a chuckle. “I haven’t seen these since before Grandpa Jared passed. I thought them long gone. I wonder who put them in this box.”

“You must have put whatever it is there, Gram,” Hanna said with a bit of impatience, common of young people dealing with the older generation.

“You are assuming I am suffering from early ‘old timer’s’ disease, but it’s not true. I thought these were long gone.”

Jessica clutched the two books to her chest as she stood.

“No, they contain a story my Papaw Jared thought should be kept alive to be shared sometime after our deaths.. He was in his eighties when he asked me to record his tale, a story I shared with him. Although he could read and write, Papaw Jared was not much for his letters. He worried too much about correct spelling and such. His teacher was quite strict, striking his hands many times for his poor penmanship, and I often helped with legal papers and the such as I grew older. Eventually, Papaw told his tale into an old tape recorder, and I transcribed it for him.”

Jessica shot a quick glance at her granddaughter, and hope lodged in Jessica’s heart. She long regretted not knowing for certain whether Hanna could be the answer to a family mystery. With the absence of Jeremy’s family during t0hose years when the girl might show herself, Jessica remained uncertain about how to approach the subject.

“I’d like very much to share the story with you,” she said tentatively. “There’s a bit about you in it.”

Hanna’s nose twitched in what appeared to be disapproval, but she said, “As you’re willing to help me with the dress, it’s the least I can do.”

Jessica knew that was likely the best she would earn from her granddaughter. Since her son’s family took “Reading and Writing and Route 23” to the North, there was a chasm of misconstructions between them.