In History, “False Teeth” Were Not So False 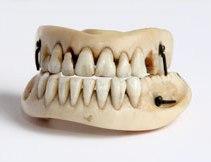 What we refer to as “false” teeth are not false, for most dentures in history contained real teeth, either from an other human or from an animal. Some of the oldest finding regarding false teeth come to us from Mexico. They date to around 2500 BC, and excavators confirm the use of wolf molars in the denture. Original dentures had difficulties with fit, attachment, comfort, and durability, but became a necessary evil as tooth decay became more prevalent with dietary changes, especially the consumption of sugar.

Around the 7th Century, the Etruscans developed a method that led to what we now think of as dentures. They used gold wire to secure a false tooth to those around it, creating a new tooth for the missing one.

During the 16th Century, the Japanese invented wooden dentures. They made a beeswax impression of the person’s teeth, before an artisan would carve teeth to match the impression, setting the new teeth on a soft mouth guard, again made of beeswax. 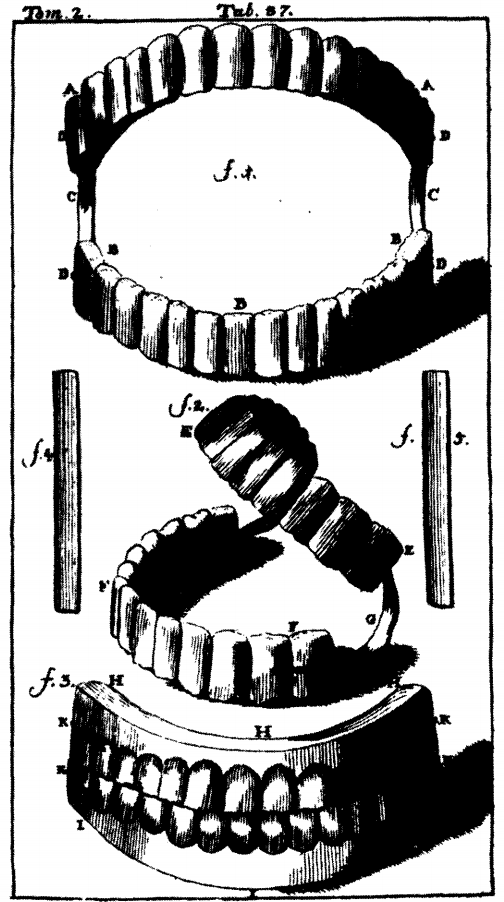 This practice ended with their civilization, but had a upsurge during the 1700s when “dentures” were made. It was a time when it was rare for an adult to reach middle age without having lost one or more teeth. Dr. Natalie Harrison tells us, “In 1728, Pierre Fauchard wrote about crafting false teeth from wire brackets and hand-carved animal bone. In 1774, Alexis Duchâteau made the first porcelain dentures. While they looked aesthetically pleasing, the pure porcelain was prone to chipping and cracking. In 1820, a [Westminster] jeweler and goldsmith named Claudius Ash made a huge advancement in denture knowledge and craftsmanship. He decided to mount porcelain on 18-karat gold plates with gold springs and swivels. This reinforced the porcelain, and resulted in dentures that work well and looked natural.”

The True History of False Teeth speaks to the materials used in early dentures: “Ivory was one of the earliest materials used to replace lost teeth. Ivory came from animals like the hippopotamus, walrus, or elephant. These teeth tended to decay and rarely looked natural, but got the job done. Ivory was still used for the base of dentures, even after quality human teeth became more available near the end of the 18th century. [Still improving, from the 1850s onward, dentures were made of Vulcanite, a form of hardened rubber into which porcelain teeth were set. Claudius Ash’s company was the leading European manufacturer of dental Vulcanite.]

“The best dentures were made from human teeth. The source of these teeth ranged from robbed graves, peasants looking to make a quick buck, and even dentists’ collections. Understandably, these sources provided poor quality teeth. Their poor quality meant that dentures were mostly cosmetic and needed to be removed for eating. 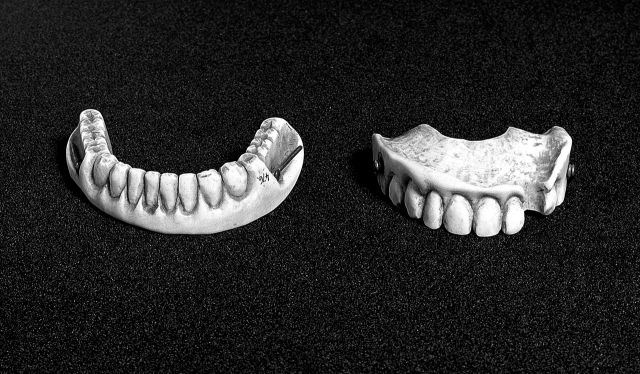 Carved ivory dentures from the 18th century. Left is lower/mandibular; upper/maxillary is at right. https://en.wikipedia.org/wiki/Dentures#/media/File:Carved_ivory_upper_and_lower_denture_Wellcome_L0003910.jpg

“The death of 50,000 men at the battle of Waterloo in 1815 soon diminished the lack of quality human teeth. Soldiers marching at Waterloo were young and healthy, so their teeth were ideal for denture making. “Waterloo teeth” became the fashion in Britain and were often worn as a trophy despite the impossibility of knowing their direct origin.[Waterloo teeth were riveted into the base of animal ivory.] This practice of using human teeth for dentures continued on into the late 1860s. The American Civil War provided one source to these later versions of ‘Waterloo teeth.’

“Luckily, such ghastly techniques lessened after 1843 when Charles Goodyear discovered how to make flexible rubber. Charles’s brother Nelson named the new material vulcanite and patented it in 1851. It turns out that vulcanite makes a more comfortable base for false teeth. Because other versions of false teeth were more expensive, the market for vulcanite teeth flourished. For the first time ever, middle class people bought and wore false teeth along with the rich and wealthy.

Alan Taylor on British History Georgian Lives provides a bit more information on “Waterloo Teeth.” – “This will really set your (real) teeth on edge -‘Waterloo teeth’
In 18th Century. Britain there was a burgeoning market for false teeth – the advert below dated 1792 asked for Continental teeth only ( better quality than the average discoloured British teeth?). Once received by ‘dental technicians’ such as jewellers, ivory turners or even blacksmiths. they would usually be set in ivory and sold for about £100 (an enormous sum for those times). Because demand was so high soldiers and scavengers from England extracted the teeth from bodies on the field of Waterloo and sold them on at a good profit. Generally molars were less easy to pullout than front teeth so commanded a higher price. Later in the 19th Century, vulcanite was used as the base.” 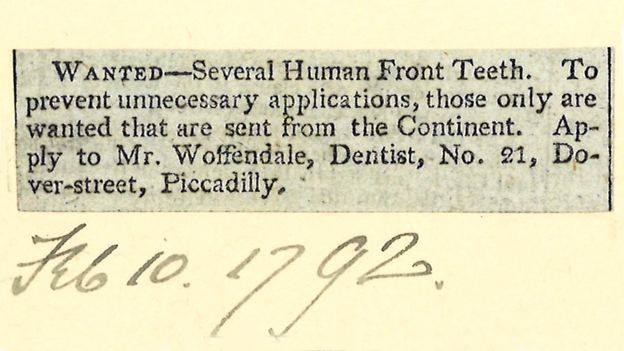 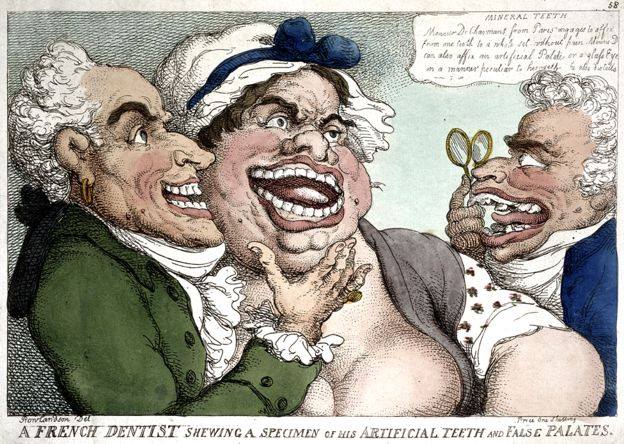 Queen Elizabeth I stuffed bits of cloth in her mouth to hide her missing teeth during public appearances.

Despite popular tales to the contrary, George Washington’s teeth were not made of wood. A partial denture made of ivory was created by Dr. John Baker for Washington during the general’s Revolutionary War years. When he was inaugurated in 1789 as the U.S. first President, Washington wore a denture made from hippopotamus ivory, into which human teeth (along with parts of both horse and donkey teeth) were fitted, a creation of Dr. John Greenwood. [Hippopotamus, walrus, and elephant ivory were all popular choices for dentures in the 1700s.] The dentures attached to Washington’s final remaining tooth.

Edentulous: A Brief History of Dentures

The Weird History of False Teeth

3 Responses to In History, “False Teeth” Were Not So False