Posted on November 12, 2018 by reginajeffers

In a time when we bemoan the loss of Borders, Waldenbooks, and fear the demise of Barnes & Noble and Books-a-Million, it is hard for us to imagine what it must have been like for those who entered “The Dome of the Muses” (or “The Temple of the Muses”) in London in the late 1700s. Found in Finsbury Square, Moorgate, it was a shop like no other. “The Temple of the Muses, which was one of the first modern bookstores, was a mammoth enterprise, by far the largest bookstore in England, boasting an inventory of over 500,000 volumes, annual sales of 100,000 books, and yearly revenues of £5,000 (roughly $700,000 today).” (Lit Hub)  Owned by one James Lackington, the shop revolutionized the book buying experience, a model copied by many, even in the current times, where Amazon has taken away the joy of smelling new books and old ones on the shelf. 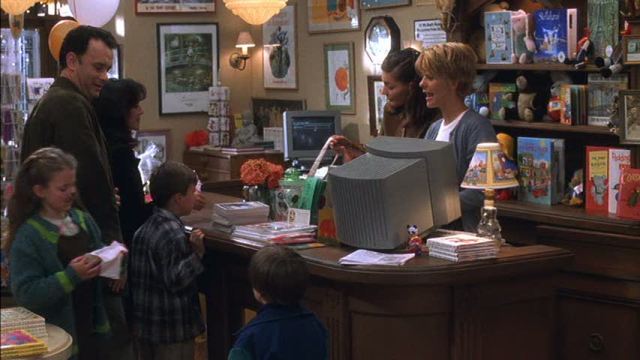 scene from “You’ve Got Mail,” which sets the small book store against the large box stores

Nigel Beale in an article on Lackington described the experience found in “The Dome of the Muses” as such: ““A dome rises from the centre, on top of which a flag is flying…Over the principal entrance is inscribed ‘Cheapest Booksellers in the World’…We enter the vast area, whose dimensions are to be measured by the assertion that a coach and six might be driven round it. In the centre is an enormous circular counter…We ascend a broad staircase, which leads to ‘The Lounging Rooms’, and to the first of a series of circular galleries, lighted from the lantern of the dome, which also lights the ground floor. Hundreds, even thousands of volumes are displayed on shelves running round their walls. As we mount higher and higher, we find commoner books, in shabbier bindings; but there is still the same order preserved, each book being numbered according to a printed catalogue.”

But who was James Lackington? How did it come to envision such a business?

Son of a shoemaker, one of eleven children, James Lackington was born in Somerset in 1748. His early life was anything but ideal. At age ten, he was a traveling pieman, becoming quite successful in his trade, so successful that his competitors threatened him with bodily harm. At the ripe old age of 14, he apprenticed with a shoemaker and found work in Bristol. He married his sweetheart, one Nancy Smith, a dairy maid, but it was not Nancy, who changed his stars, but rather a newfound love of reading. A friend purchased a copy of one of Epictetus’s works. [Epictetus was born into slavery about 55 ce in the eastern outreaches of the Roman Empire. Once freed, he established an influential school of Stoic philosophy, stressing that human beings cannot control life, only their responses to it. His teachings were written down and published by his pupil Arrian in his Discourses.] Afterward, it is said that Lackington chose to eat only minimally so he might purchase more books.

Exterior of the Temple of the Muses bookshop sold to Jones & Co. after Lackington’s death, circa 1828. ~ Public Domain ~ https://en.wikipedia.org/wiki/James_Lackington#/media/File:Temple_of_the_muses_exterior_colored.jpg

Purchasing books became somewhat of an obsession. Beale tells us, “He moved to London in August, 1774. An inheritance of ten pounds from his grandfather gave them some furniture, plus a little extra to spend at the second-hand bookstores he had begun to frequent. Like all bona fide bibliophiles he dealt with temptation in the way Oscar Wilde advised, by giving in to it; he bought almost all the books he wanted most. One Christmas eve, when tasked with buying dinner, he instead came home carrying a copy of Young’s Night Thoughts.”

While the Merton Historical Society explains his more to London a bit differently.  “After his first marriage, to Nancy Smith, he left for London, with half a crown (12.5p) in his pocket. He set up a combined bookstall and shoemaker’s shop in Featherstone Street, just north of what became Bunhill Fields. His stock was a sack of old theological books for which he gave a guinea (£1.05) and some scraps of leather. But a loan of £5 from a Wesleyan fund (for much of his life he was a practising Methodist), his own hard work and his wife’s thrift enabled him to build up a stock worth £25 and to give up shoemaking.”

James and Nancy moved to Chiswell Street to be closer to his business. However, in 1776, both he and his wife caught a fever that took Nancy’s life. Their landlady, one Dorcas Turton, tended them during this ordeal. She even fell ill herself. James and Dorcas survived and later became man and wife. The MHS tells us, “Shortly afterwards this ‘charming young woman’ became the second Mrs Lackington. ‘Having drawn another prize in the lottery of wedlock’, wrote Lackington ‘I repaired the loss of one very valuable woman by the acquisition of another still more valuable.’ He was right; Dorcas loved books and proved most helpful in the business. 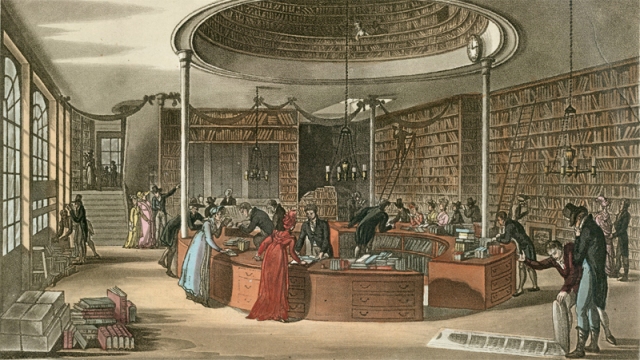 “By 1780 he had developed the trading policies that were to bring him both fame and financial success. His terms became (unusually for the time) cash only; he sold at rock-bottom prices, and he was a pioneer dealer in large quantities of publishers’ ‘remainders’, which he sold at cut price. He also bought up whole libraries, and was soon issuing catalogues of 30,000 volumes and more. By 1791, when his annual profits were £4000, and he wrote the first version of his Memoirs, he had installed himself with Dorcas in a country house in Merton and set up his own carriage.

“This was Spring House, the early 18th-century house in Kingston Road, which was demolished in the 1930s and replaced by the Spring House flats. As was quite usual at the time, the Lackingtons leased rather than bought their house, although they could have easily afforded to purchase.

“Around this time Lackington became the proprietor of a shop with a frontage of 43 metres (140 feet) at the southwest corner of Finsbury Square. Crowned with a dome from which flew a flag, it was called ‘The Temple of the Muses’, and was one of the capital’s tourist attractions. Within was an immense circular counter, round which it was said was room enough to drive a coach-and-six. ‘Lounging rooms’ were reached by way of a broad staircase, and there was a succession of Galleries, where the stock was cheaper and shabbier the higher one climbed.”

He knew success because he had learned his lessons on buying and selling at a young age. He marked every book with the lowest prices he could afford to sell it and still make a profit. He was not greedy in the sense we know it today. It is said his carriage doors held the inscription: “Small profits do great things.” He was known to drop tens of thousands of pounds at a single auction. He stuck to this ode by Samuel Wesley:

“No glory I covet, no riches I want,
Ambition is nothing to me;
The one thing I beg of kind Heaven to grant
Is a mind independent and free.”

Lit Hub explains: “Late 18th-century London was a time of great social change. More people were learning to read, and the increase in leisure time among the working and middle classes meant an increased demand for books. But books were still an expensive luxury, and bookstores could be intimidating places. At the time, the typical bookstore did not encourage idle browsing or lounging. Lackington wanted to find a way to make books more affordable and accessible while still turning a profit, and with this in mind, he set about revolutionizing the book trade in at least four ways. His first innovation was to eliminate a staple of 18th-century commercial life: credit. He ran a cash-only business, which initially shocked his competitors and insulted some of his customers, but he reasoned that if he sold for cash, he could buy for cash instead of taking out costly loans; in this way he avoided interest charges as well as the losses incurred by customers unable to pay their debts. His second innovation had to do with his handling of remainder sales. The standard practice was for booksellers to buy large quantities of remaindered titles and then destroy as many as three-quarters of the books in order to drive up prices. But Lackington bought huge lots—sometimes entire libraries—and then drastically reduced the prices of all the books in order to sell them at high volume. In this way he kept books in circulation, made them affordable to a wider range of buyers, and turned a substantial profit all at the same time. Lackington’s third innovation will be familiar to anyone today who loves a bargain: he convinced his customers that they were getting a deal by refusing to haggle over prices. He posted this sign in his shop: The lowest priced is marked on every book, and no abatement made on any article.”