On May 29, 1842, Prince Albert and Queen Victoria were returning to their home at Buckingham Palace from Sunday morning services at the royal chapel at St. James’s Palace when what Albert later described as “a little, swarthy, ill-looking radical” attempted to shoot the Queen. John Francis, a 20-year-old cabinetmaker, reportedly stood astride along the Mall and pointed a small flintlock pistol in the royal couple’s direction. Unfortunately for Francis, but, fortunately, for Her Majesty, the weapon failed to fire. Francis turned quickly away and disappeared into the crowd and across Green Park. 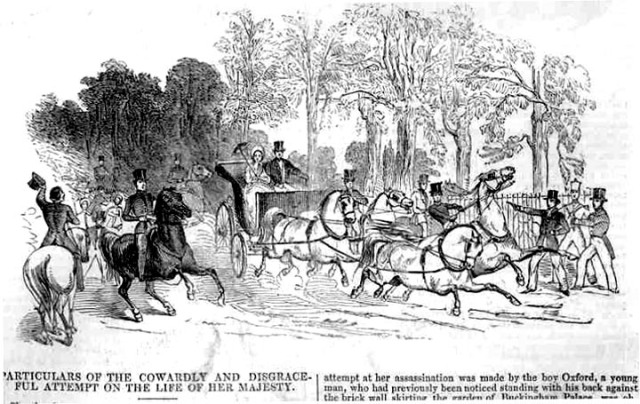 John Francis’s attempt: “The Cowardly and Disgraceful Attempt on the Life of Her Majesty.” The Illustrated London News, 4 June 1842. http://www.victorianweb.org/history/victoria/murphy.html

One would think after the attempt by Edward Oxford in June 1840 and the growing unrest and the number of dissidents that the Queen would be afforded more security, but no extra precautions had been instigated. Albert, in a letter to his father, wrote: “[I] saw a man step out from the crowd and present a pistol fully at me. He was some two paces from us….” John Francis was close enough to the Queen for Prince Albert to report that he heard the trigger click. 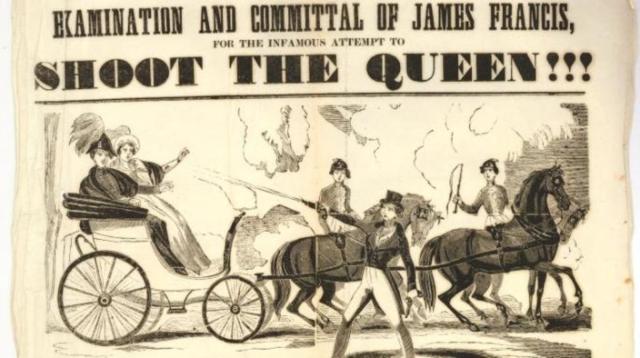 Prime Minister Robert Peel agreed to a plan to identify the Queen’s attacker. Victoria and Albert rode out again the following day, Monday, May 30. Only Colonel Charles Arbuthnot and Lieutenant Colonel William Wylde escorted them to and from Hampstead as outrider equerries. John Francis foolishly attempted a second attack upon the Royals’ return. 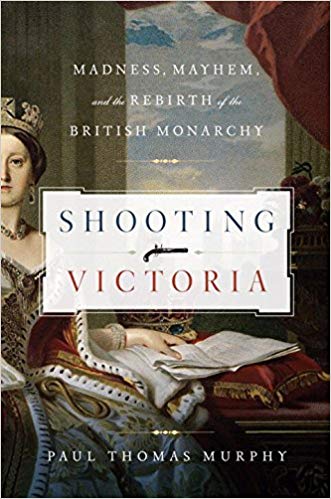 Shooting Victoria: Madness, Mayhem, and the Rebirth of the British Monarchy by Paul Thomas Murphy

History.com tells us, “While Prince Albert informed the royal security forces that a gunman was on the loose in London, Queen Victoria insisted she would not confine herself to Buckingham Palace until he was caught. Believing that the best way to flush out the would-be assassin was for the royal couple to leave the palace again the following day, Victoria and Albert were nervous as they circled London for an evening drive in an open barouche. “You may imagine that our minds were not very easy,” Albert wrote to his father. “We looked behind every tree, and I cast my eyes round in search of the rascal’s face.” While plain-clothed officers with a description of the suspect scoured the crowd, a shot suddenly rang out just five paces from the carriage. Police tackled the suspect who missed his mark. Once again, it was Francis….”

Francis was imprisoned at Newgate. He was tried and found guilty of high treason and sentenced to be hanged, drawn and quartered. Queen Victoria commuted his sentence to Transportation for Life to Norfolk Island. Francis was eventually released on “ticket-of-leave” in 1867. 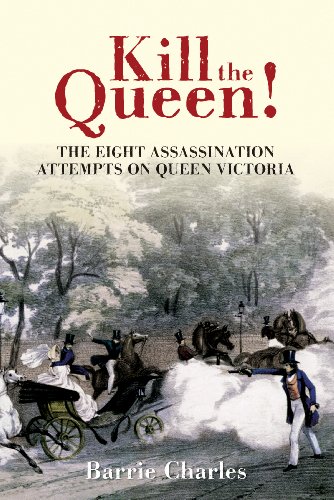 Kill the Queen!: The Eight Assassination Attempts on Queen Victoria by Barrie Charles