Posted on October 5, 2018 by reginajeffers 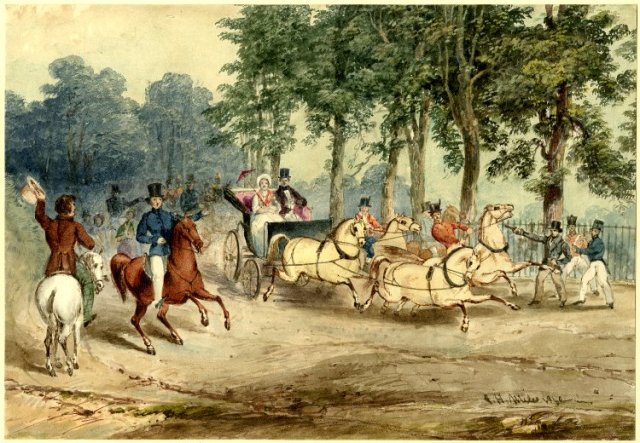 Edward Oxford shooting at Queen Victoria, June 10, 1840; the Queen and Prince Consort driving in a phaeton with four horses towards Constitution Hill; Oxford standing in front of the Green Park railings pointing a pistol in an attempt to assassinate the Queen, while a policeman runs towards him, one of the Queen’s attendants on horse at left. By G. H> Miles, 1840, British Museum. Watercolour, strengthened with gum This image is either reversed horizontally or inaccurate, as the carriage had the railings of the park on its right at the time of the attempt. ~ public domain ~ G. H.Miles (Life time: 1840) – Original publication: June-Dec, 1840 Immediate source: British Museum ~ https://en.wikipedia.org/wiki/Edward_Oxford#/media/File:Edward_Oxford%27s_assassination_attempt_on_Queen_Victoria,_G.H.Miles,_watercolor,_1840.jpg

On Monday of this week, I added a post to the blog regarding Edward Oxford, the man who was the first to make an attempt on Queen Victoria’s life. However, afterwards, I was wondering if Oxford was the one who shot Prince Albert. After all, I have watched the movie Young Victoria many times, and I have witnessed Albert’s love for his wife and hers for him. Right? Even the TV show Victoria has included a like scene (without Albert being shot). Surely, the screenwriter and the director and the producer did not play havoc with history. (Smirk!!!)

In both the film and the television version of Queen Victoria’s life, when Oxford’s assassination attempt happens, Albert throws himself across his wife to protect her. In the film, he is hit by a bullet, sending Victoria into fits of worry.

First, I wish to repeat a quote from Monday’s post.. “In a letter from Prince Albert to his brother, Prince Ernest of Saxe-Coburg, Albert explains what happened:

12 June 1840: I saw a most disagreeable looking man leaning against the rail of Green Park only six paces from us, holding something toward us. Before I could see what it was, a shot cracked out. It was so dreadfully loud that we were both quite stunned. Victoria, who had been looking to the left, towards a rider, did not know the cause of the noise. My first thought was that, in her present state, the fright might harm her. I put both arms around her and asked her how she felt, but she only laughed. Then I turned round to look at the man (the horses were frightened and the carriage stopped). The man stood there in a theatrical position, a pistol in each hand. It seemed ridiculous. Suddenly he stooped, put a pistol on his arm, aimed at us and fired, the bullet must have gone over our heads judging by the hole made where it hit the garden wall. [Raymond Lamont-Brown, How Fat Was Henry VIII, The History Press, ©2008, page 147]

Notice, there is no words of his being wounded or his doing more that putting his arms about Victoria. According the website History House, this was the way things transpired:

“The Times newspaper reported that Oxford,

“… presented a pistol and fired it directly, either at Her Majesty or Prince Albert, there being no person between him and the carriage. The Prince who, it would seem, had heard the whistling of the ball, turned his head in the direction from which the report came, and Her Majesty at the same instant rose up in the carriage, but Prince Albert as suddenly pulled her down by his side. The man then drew from behind his back a second pistol, which he discharged after the carriage, which proceeding at the ordinary pace, had … passed him a little.”
The Times 11 June 1840, page 4.

“The day after the attempted assassination, The Times reported that Oxford was giving a different account saying that the Prince was even trying to get out of the carriage.

“Oh, I know to the contrary; for when I fired the first pistol, Albert was about to jump from the carriage and put his foot out, but when he saw me present the second pistol, he immediately drew back.”
The Times, 12 June 1840, page 6.

“However, a witness at the later trial testified that Prince Albert had indeed pushed the Queen down,

“…the flash of the pistol came almost immediately over the Queen’s head – the Queen was crouching – she rather crouched, and the Prince stood – I think, to the best of my knowledge, the Queen first rose, and by what I observed, the Prince rather pressed her down; and it was immediately before the second pistol was fired that her Majesty crouched – it was the second flash which appeared to come over the Queen’s head.” [The Proceedings of Old Bailey: Edward Oxford]

“There is no evidence that Prince Albert received any injury. The scriptwriter for the film, Julian Fellowes, has admitted that the injury has been added to the film’s story for dramatic effect.”

From The Daily Mail, this is Julian Fellowes take on the scene:

“Fellowes immediately recognised he had been given a tremendous responsibility in having to recreate the story of a young Queen coming to the throne at 18, against considerable family plotting, as well as having to capture the manners, snobbery and strict class confines of Victorian England.

“‘I’ve tried to be truthful,’ he says. ‘I’ve only changed two elements of fact for the screen.’

“The first was an assassination attempt made on the young Queen as Victoria and her husband Prince Albert were riding in an open carriage up Constitution Hill. Spotting the gunman raise his pistol in the crowd, Albert immediately pushed his young wife down into the well of the carriage to protect her. By doing so the bullet injured Albert. But did it?

“Fellowes agrees there are differing accounts of what really happened. ‘One is that the bullet was fired, but missed him, and the other is that the gun jammed. But the event itself certainly happened.

“‘I felt that this was fantastically brave of Prince Albert and that if the gun had jammed, we would lose how brave his action was. I believe Victoria was so impressed that he was prepared literally to take the bullet, that it changed something in her.

“‘She realised how much Albert truly loved her. You see this change in her immediately after the assassination attempt, with her moving his desk into her own study at the Palace so they could be side-by-side throughout each day.

“‘I know I will be criticised, but in the end a movie has to deliver the right emotions. And I felt it would not be possible to represent that as the act of bravery and selflessness that it was, without showing the gun going off.'”