The origin of the practice of what is known as “well dressings” is a bit of a mystery. Most believe the celebration dates back to the Celts, but few places, other than Derbyshire and Staffordshire, England, have kept the tradition. It is assumed that Derbyshire’s, in particular, remoteness kept the tradition from being usurped by the later Roman, Saxon, Danish and Norman invasions. Early Christians considered the decoration of wells as a pagan ritual, worshipping a water god. However, eventually, the churches relented. Today, most villages hold a church service to bless the well, which is followed by a carnival-like celebration.

Tissington was the first village to re-introduce the practice, as far back as 1349. The celebration was to mark the fact that Tissington had escaped the Black Death. The Black Death was a devastating global epidemic of bubonic plague that struck Europe and Asia in the mid-1300s. The clean water taps were decorated by the villagers.

In a “well dressing” ceremony, wells and springs decorated with pictures made from flowers and other natural materials. The pictures are constructed on a wooden frame, which has been soaked in a nearby river to make certain it is very wet. The frame has a wet clay backing to hold the flowers, etc. First, the outline of the image is made. Then the designer adds the more durable elements (those that do not dry up quickly). These are likely to be seeds, bark, pine needles, moss, etc. Finally, the flower petals are added. (In the U. S., much the same process is used to create the floats in the annual Rose Parade.) The items chosen for the image depend on the whether the celebration is a spring one or occurs in the autumn.

WellDressing.com (which has a great section on the construction of the dressings) tells us, “In the early days, the dressing of wells would have taken the form of simple arrangements of flowers and other natural materials. In this form it takes place today in many parts of the world. The unique Derbyshire tradition of elaborate pictures made for the most part of individual flower petals pressed onto clay covered boards seems to date from Victorian times, when there were many movements afoot to revive and enhance old folk traditions. The earliest recorded examples are in Tissington, but the tradition quickly spread to other villages. Sometimes, as in Youlgrave, the Dressings appeared at the village taps (pumps or fountains) to celebrate the arrival of piped water; hence the reason why they are sometimes known as Tap Dressings.

“One example of Tap Dressing was in Endon in the mid-19th century, possibly as early as 1845. Endon is in Staffordshire, thus disproving the commonly held belief that Well Dressing beyond the boundaries of Derbyshire is a recent phenomenon. Like Tissington and Youlgrave, Endon continues the Well Dressing tradition to the present day.

“Another commonly held misconception is that Tissington is always the first Well Dressing of the year. This used to be true; Tissington has kept to the tradition of holding its Well Dressing Festival on Ascension Day, while the next group of dressings typically occurred at Whitsun. With the introduction of May holidays on fixed dates, however, a number of venues now hold their events in the early part of May. Because Ascension Day is a moveable feast, these can occur before of after the date of Tissington.

“Quite a number of town and villages have a long standing tradition of Well Dressing going back to the late 19th or early 20th centuries. Others have come and gone over the years, but the last few decades of the 20th century saw a great revival of the craft, with many villages in Derbyshire taking up the tradition. Villages in other counties did so too, often as a result of a former Derbyshire resident moving there. A kind of peak was reached with the Millennium Year when everyone seemed to pull out all the stops to make a great celebration. After that a slight malaise seemed to set in and a number of established venues disappeared from the calendar. Writing nearly a decade later, I am happy to be able to record another revival under way; although we may still be losing a few old established and much loved venues, many more new events are seeing the light of day each year.” 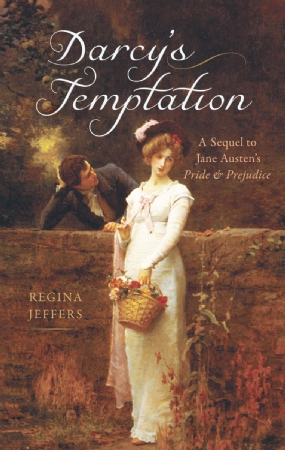 Note: I often use well dressing celebrations in my books. In one particular book, Darcy’s Temptation, Elizabeth and Georgiana purposefully dress in the same colors as the women in the winter well dressing depiction. It becomes a wonderful scene where Mr. Darcy’s learns a proper lesson regarding his new wife.

3 Responses to Derbyshire and Well Dressings