Retracing Themes in Austen’s Life and Works, a Guest Post from Collins Hemingway

This post originally appeared on Austen Authors on February 22, 2018. Enjoy!!!

My blogs over the last two years have covered a wide expanse of territory: Jane Austen’s fiction; her speech patterns; her looks; her romantic life, both real and possible; the close biological relationships of people involved in courtships; the effect of the war on her life and that of her family; taxes; and even the jewelry she wore.

Over that time, I have come upon additional information about some of these topics. This post follows up with material that expands on what I originally wrote, providing additional background and depth on repeating themes and ideas in Austen’s life and works.

In honor of tax day in America (April 15), I summarized the many taxes that individuals paid back then in England, much of the funding supporting the war with France. One of the highest duties was paid on carriages, which were the province of the rich. Jane Austen’s cousin and sister-in-law, Eliza, who enjoyed the high life whenever she could, complained about such levies on luxury items. “New taxes will drive me out of London and make me give up my carriage,” she griped—though she continued to live in grand style in the expensive capital for most of her life.

I pointed out that Mr. Bennet’s horses in Pride and Prejudice would not have been taxed, because they were primarily farm horses. Jane Austen herself makes a similar point through an indirect reference in real life. In a letter of 24 January 1813, she speaks of riding with Mr. and Mrs. Clement in “their Tax-cart,” so named because this open work cart had a lower tax rate than a fancy carriage. Most of the taxes were paid by the rich, but a few, including taxes on spirits, hats—and carts—were paid by the poor and middle classes.

In one of my earliest blogs, I wrote of a turquoise ring Jane owned. It might have come from the meager inheritance the family received through the Stoneleigh inheritance, a story too complicated to repeat here. The point was that the stone was odontolite, a polished blue fossil that connected Jane to Lyme Regis’s Mary Anning, in 1804 a child fossil hunter. Mary’s family dug out fossils from the cliffs at Lyme Regis and sold them in the local market when Jane lived there. It’s even possible that this is where Jane bought her ring. As a pioneering paleontologist, Anning became the most famous woman scientist of her day—though like most women, underpaid and underappreciated.

After Jane’s death, her sister Cass gave the ring as a wedding present to Eleanor, the second wife of brother Henry (Eliza, Henry’s first wife, had died a few years earlier). Eleanor must have been very beloved for Cass to give her this precious keepsake. The ring came down through the family, was purchased by the Jane Austen Memorial Trust, and can now be seen at the Jane Austen’s House Museum in Chawton, Hampshire.

As I described just last month, all the able-bodied men in Jane Austen’s family helped England’s military effort in some way, but only the women suffered direct casualties: Cassandra, who lost her fiancé, Tom Fowle, to disease on a military expedition; and Elizabeth, Jane’s sister-in-law, who lost her youngest brother in a naval battle.

Still other casualties, it turned out, haunted the women: Tom Fowle’s brother, a medic, died in Egypt in 1801, a few years after Tom. (A few years after that, another Tom Fowle, a nephew of Cass’s fiancé, moved up through the ranks by serving successively on the ships of Frank and Charles, Jane’s sailor brothers.) Finally, Lady Burrell, a dear friend of Eliza, lost her son, a captain of the dragoons, in an abortive British invasion of Argentina. Often in the background of her novels, the war weighed heavily on the country in actual life.

Two of my blogs touched upon marriages involving consanguinity—close blood ties. Austen’s work and life were replete with marriages involving first cousins and a couple that involved a psychological closeness akin to siblings. At that time, marriage between first cousins in England was technically forbidden. The practice is now legal in the United Kingdom and is fairly common around the world, but remains problematic in the U.S. Today, cousin marriage is illegal in about half the states—including the two, Oregon and Arkansas, where I’ve lived most of my life. In five states, cousin marriage is a criminal offense! An advice columnist even received a query in 2017 from a foreign-born woman whose American friends were concerned about her marrying her third cousin (their closest connection being great-grandparents). American law is based on largely debunked concerns of damaged offspring.

In Regency society, cousins married all the time. The practice was common among the wealthy to keep family fortunes intact. In the Austen world, the reason must have been love, for no fortunes were ever melded. The most visible, of course, was Henry’s marriage to Eliza, but Frank’s son and Charles’s daughter also married. In addition to the several I mentioned, I found at least one more: Henry, a son of Jane’s brother Edward, married another cousin, Sophie Cage. Others may lurk in the interconnected tangles of families close to the Austens. 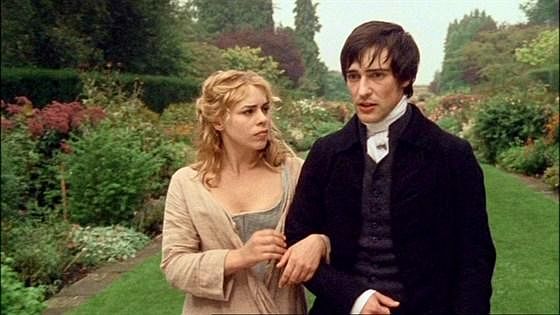 The Mansfield Park marriage of Edmund Bertram and Fanny Price was the biggie in Austen’s novels. A reader, Cinthia, pointed out that I had overlooked one in Persuasion, between Henrietta Musgrove and Charles Hayter, whose mothers are sisters.

Several commentators, most recently E.J. Clery, in her 2017 book Jane Austen: The Banker’s Sister (pp. 208-211), have noticed how close the cousins orbit toward the psychological sphere of brother and sister and how that closeness sometimes leads to amorous rather than sibling affection. When he takes Fanny in, Sir Thomas Bertram worries about her becoming too close with his sons, but Mrs. Norris, the meddling aunt in MP, dismisses his concerns with her usual lack of judgment, saying nothing improper could come of Fanny being “bred up” as a sister to the Bertram boys.

Edmund and Fanny’s first major encounter involves what Clery calls a “triangulation” of sibling affection involving William Price, Fanny’s brother, now in the Navy. Edmund comes upon Fanny weeping because William has asked her to write but she has no paper. Edmund not only provides the paper but also slips in a half-guinea coin for the young man. “With this small transferal of wealth,” Clery says, Fanny becomes “devoted to Edmund”—a sisterly affection that becomes stronger and more romantic over the years.

Though at times a modern reader might squirm at such thoughts, Clery cites the critic Celia Easton as saying that in Austen, “sibling-style love lays a good foundation for committed relationships.” Austen herself sees nothing unnatural about the closeness of cousins, encouraging one of her nieces to develop a relationship with one of hers. “I like first cousins to be first cousins, & interested about each other,” she says in a letter to Anna Austen Lefroy, 29 Nov 1814. “They are but one remove from Br & Sr.”

Another couple “but one removed” from brother and sister are Emma and Mr. Knightly (image by headline, from 1995 movie), who struggle with emerging romantic feelings after twenty years of sibling-style affection. They begin with a dance, which as Austen says elsewhere, is “a certain step towards failing in Love.” Emma says that they are “not so much like brother and sister as to make it all improper,” to which Mr. Knightly exclaims, “No, indeed!”

The Trilogy is also available in a single “boxed set” e-book:

Enjoy these other posts from Collins Hemingway shared on this blog:

24 July 1817: The Burial of Jane Austen at Winchester Cathedral

Do Jane Austen’s Novels Reveal Her View of Slavery?

Fight Against Slavery Carried on Beyond Austen’s Life