Posted on February 5, 2018 by Regina Jeffers 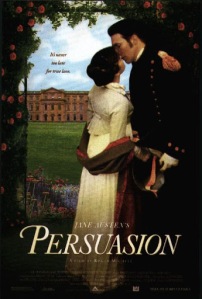 Although I have seen the other version of Austen’s “Persuasion,” this one is my favorite. It certainly is not the pretty heritage film common to the genre. The scenes are grittier and more life like. Nick Dear uses candles for lighting, which provides the viewer a sense of being within the scene with the actors. In this version, we are well aware that Anne Elliot “has lost her bloom.” Amanda Root goes through a change of appearance in the film, from dowdy to attractive.

Nick Dear’s notes on the screenplay indicate that the character of Anne Elliot will be less well dressed than the rest of her family, especially Elizabeth and Sir Walter, who preen throughout the action. Through the first third of the film, the viewer sees Anne as do the Musgroves, the Elliots and Captain Wentworth: She became an “old maid.” Her plain clothing choices, strict undo, meek behavior among her immediate family, and the solemn expression upon her countenance name Anne as hopeless. Anne wears loosely fit clothing and over large capes, indicating she wishes to fade into the wallpaper. At Kellynch, Anne is little more than a housekeeper. We see this because it is Anne who is in charge of the keys and the organization of the house while her father and Elizabeth retrench in Bath. At Uppercross, Anne is relegated to pianist while the others enjoy the evening with dance, and it is Anne who tends Mary’s children.

Anne’s life is very small. She looks out the window upon the others participating in life. She remains alone in her rooms at Uppercross while the rest of the family shares in Wentworth’s arrival. The scene is quite poignant. Anne stares at her reflection in the mirror. The camera is behind her, and the viewer sees her introspective expression in the mirror. Anne realizes she has nothing to tempt Wentworth’s return to her side.

The journey to Lyme brings a change to Anne’s countenance and her confidence. She encounters William Elliot for the first time, and Captain Benwick’s attentions go a long way in bolstering Anne’s self worth. They also go a long way in igniting Wentworth’s jealousy. The captain disapproves of Benwick reciting poetry to Anne, and Wentworth takes note of William Elliot’s notice of Anne on the steps from the beach. We observe the suppressed emotions on Ciarán Hinds’ countenance in the role of Captain Wentworth.

By the time Anne travels to Bath, she is transformed. There is more sophistication, and her stature no longer is one of meekness. Her clothes are more closely fitted, and there is a bit of color to her cheeks. At the concert in Bath, Anne hopes to express her resolve to have Wentworth if he would simply accept her overtures. We see her break with propriety by chasing Wentworth from the concert hall when he means to leave in a jealous huff. Her desire to prevent his leaving indicates Anne’s desire to reunite with Wentworth. His brusque reply to Anne’s entreaty displays his lack of control when observing William Elliot court Anne. Michell’s use of a circulating camera adds to the chaos of Anne’s desperation and emphasizes Wentworth’s desire to plant Mr. Elliot a facer. Wentworth’s pride and uncertainty causes him to lash out at Anne. He knows he still loves her, and he cannot tolerate another rejection. Moreover, Wentworth wonders if Anne is still under the influence of her godmother, Lady Russell.

One of the differences in this film adaptation is there is no voice over narrator, as with the makings of Mansfield Park or Emma. The director, Roger Michell, used the camera to convey the strong emotions bombarding Wentworth and Anne. Please note how seamlessly this occurs. At the first meeting between Anne and Wentworth, she utters but two words, “Captain Wentworth.” She grips the back of the chair to steady her composure. Michell directs the camera to take a close up of Anne’s face to clock her discomfiture and then to pan to her white knuckled fingers on the chair. Without words or elaborate staging, the viewer recognizes Anne’s anguish at seeing her dreams vanish before her eyes. 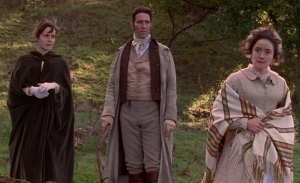 When the Uppercross party walks to Winthrop, we again see Anne’s extreme discomfort when Wentworth warns Louisa Musgrove to stick to her decisions. The one man Anne always adored expresses her most unforgivable sin: permitting others to define her happiness. When Wentworth is the only one to note how Anne struggles on the long walk, it does Anne well to know he does not wish her harm. There is a close up on Wentworth’s hand on her waist as he assists her in the gig with his sister and Admiral Croft. Yet, even with the kindness, Wentworth turns away from her gaze when Anne looks back to him. He is saying, “I will not see you suffer, but I mean to have none of you.”

There is a slight break from the novel. In “Persuasion,” Wentworth tells his sister that “anyone between fifteen and thirty may have him for the asking,” but in the film Sophia Croft says these words to Anne. It is a reminder to Anne that Wentworth is likely to choose one of the Musgrove sisters. In the novel, Wentworth’s words indicate that he knows his duty as a gentleman, but deciding on another is not so easy. Anne Elliot is the woman by whom he judges all other. Despite his best efforts to overcome Anne’s supposed betrayal, Wentworth knows the Musgroves cannot hold a candle to Anne. 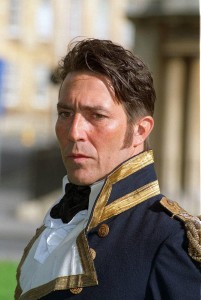 Michell chose to present Hinds in naval garb rather than Regency civilian clothing worn by Bryan Marshall in the 1971 film. Hinds is also not the “pretty boy” we find other adaptations of Austen’s works. He has the rugged look of a man who spent his time at sea. We view Wentworth’s command as he leads his little party through Lyme and upon the Cobb. Yet, we also see him as “a fish out of water” in his interactions with Anne. He acts out of pettiness when he treats Anne coldly and when he accepts the adulation of the Musgrove sisters to prove Anne “missed out on a good thing.”