Posted on January 2, 2018 by reginajeffers

One of my favorite love songs comes to us from the poet Ben Jonson. According to Poets.org, “The poet, essayist, and playwright Ben Jonson was born on June 11, 1572 in London, England. In 1598, Jonson wrote what is considered his first great play, Every Man in His Humor. In a 1616 production, William Shakespeare acted in one of the lead roles. Shortly after the play opened, Jonson killed Gabriel Spencer in a duel and was tried for murder. He was released by pleading “benefit of clergy” (i.e., by proving he could read and write in Latin, he was allowed to face a more lenient court). He spent only a few weeks in prison, but shortly after his release he was again arrested for failing to pay an actor.

“Under King James I, Jonson received royal favor and patronage. Over the next fifteen years many of his most famous satirical plays, including Volpone (1606) and The Alchemist(1610), were produced for the London stage. In 1616, he was granted a substantial pension of 100 marks a year, and is often identified as England’s first Poet Laureate. His circle of admirers and friends, who called themselves the “Tribe of Ben,” met regularly at the Mermaid Tavern and later at the Devil’s Head. Among his followers were nobles such as the Duke and Duchess of Newcastle as well as writers including Robert Herrick, Richard Lovelace, Sir John Suckling, James Howell, and Thomas Carew.”

After March 1616, Ben Jonson took an ancient love letter and turned it into a poem. Ben Jonson’s Song: To Celia” is often identified by its first line: ‘Drink to me only with thine eyes.’ This line is actually simply a word-for-word translation of a line from one of the letters of the 3rd-century Greek author Philostratus. And, the similarities do not stop there. In addition to the Epistles of Philostratus, some experts point to the classical literature of Catullus for the poem’s inspiration.

Study.com tells us, “In fact, many of the sentiments and images Philostratus includes in his erotic love letter are used by Jonson in his ‘Song: To Celia.’ For example, Jonson employs two different allegories in the poem’s two stanzas: one involving wine; the other, roses. This framing structure that Jonson uses closely resembles Philostratus’ closing line, ‘Because, that way, no one is without love like someone still longing for the grace of Dionysus while among the grapevines of Aphrodite.’ Using symbolic representations of the Greek god of wine (Dionysus) and the goddess of love (Aphrodite), Jonson not only repurposes Philostratus’ imagery, but also reflects his predecessor’s sentiment concerning his own sweetheart: no other divine, intoxicating presence (wine/Dionysus) is needed where she is around.”

Around 1770, the poem became the lyrics of “Drink to Me Only with Thine Eyes.”

Wikipedia provides this information: “John Addington Symonds demonstrated in The Academy 16 (1884) that almost every line has its counterpart in “Epistle xxxiii” of the erotic love-letter Epistles of Philostratus. The Athenian. Richard Cumberland had, however, identified the link to “an obscure collection of love-letters” by Philostratus as early as 1791. George Burke Johnston noted that ‘the poem is not a translation, but a synthesis of scattered passages. Although only one conceit is not borrowed from Philostratus, the piece is a unified poem, and its glory is Jonson’s. It has remained alive and popular for over three hundred years, and it is safe to say that no other work by Jonson is so well known.’ Another classical strain in the poem derives from Catullus.  In a brief notice J. Gwyn Griffiths noted the similarity of the conceit of perfume given to the rosy wreath in a poem in the Greek Anthology and other classical parallels could be attested, natural enough in a writer of as wide reading as Jonson.

“Willa McClung Evans suggested that Jonson’s lyrics were fitted to a tune already in existence and that the fortunate marriage of words to music accounted in part for its excellence. This seems unlikely since Jonson’s poem was set to an entirely different melody in 1756 by Elizabeth Turner. 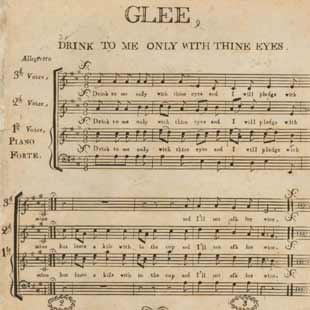 Another conception is that the original composition of the tune was by John Wall Callcott in about 1790 as a glee for two trebles and a bass. It was arranged as a song in the 19th century, apparently by Colonel Mellish (1777-1817). Later arrangements include those by Granville Bantock and Roger Quilter.  Quilter’s setting was included in the Arnold Book of Old Songs, published in 1950.” Some think the song was created by Mozart, but there is no evidence to that fact. As to Colonel Mellish being the composer of the music, that is unlikely as he is believed to have been born in 1777. Grattan Flood asserted that he had seen an edition of the song dating from about 1803 with Henry Herrington of Bath (1727-1816). 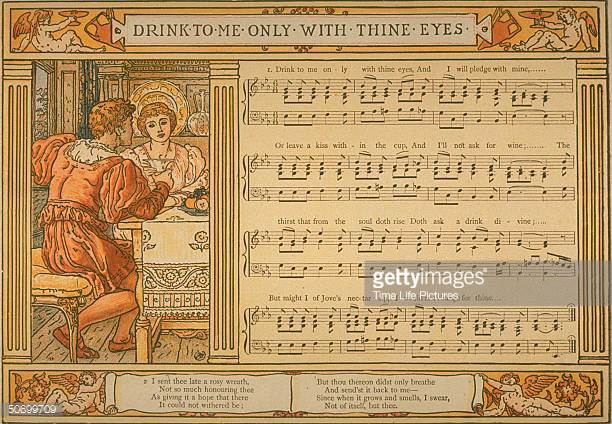 Drink to Me Only with Thine Eyes

Drink to me only with thine eyes
And I will pledge with mine.
Or leave a kiss within the cup
And I’ll not ask for wine.
The thirst that from the soul doth rise
Doth ask a drink divine;
But might I of Jove’s nectar sip,
I would not change for thine.
I sent thee late a rosy wreath,
Not so much hon’ring thee
As giving it a hope that there
It could not withered be;
But thou thereon did’st only breathe,
And sent’st it back to me,
Since when it grows and smells, I swear
Not of itself, but thee.
Listen to Versions of “Drink to Me Only With Thine Eyes” on You Tube by going HERE.

Regina Jeffers is the award-winning author of Austenesque, Regency and historical romantic suspense.
View all posts by reginajeffers →
This entry was posted in British history, literature, love quotes, music, Uncategorized and tagged Ben Jonson, British history, Drink to Me Only with Thine Eyes, music, Song of Celia. Bookmark the permalink.