As reported in last month’s blog about Jane Austen’s romantic attachments, biographers dutifully recount the story of Jane’s acceptance/rejection of a proposal by Harris Bigg-Wither, a young, brash man six years her junior, on Thursday-Friday, 2-3 December 1802.

The story goes that Jane and Cassandra journeyed to Manydown, the Bigg-Wither estate, for several weeks of leisure with the family. The Austen ladies were good friends with Harris’s sisters, especially Caroline and Alethea. On 2 December, Bigg-Wither surprises Jane with a proposal. Overwhelmed at the prospect of becoming mistress of a large estate, Jane accepts this proposal from a person with little to recommend him except wealth. She reconsiders overnight; recants her acceptance in the morning; then flees back to Bath in humiliation. (A woman could accept and reject a proposal then; a man could not withdraw one without the woman’s consent.)

What is distinctly odd about this history, however, is that this purported engagement and refusal, which would have created a scandal, does not appear to show up in any surviving contemporaneous letters or journals by anyone who knew Jane.

When I began to analyze the details of Austen’s life eight or nine years ago for historical fiction based on her life, I recognized that the references all went back to Caroline, daughter of her brother James and sister-in-law Mary, “the Steventonites”—so called because they replaced the Austens’ father and his family at the Steventon rectory when the elder Austen retired to Bath in 1801 and James took over as vicar. I knew Caroline sourced the story to her mother, but it wasn’t until some years later, when it hit me that Caroline was one of Austen’s youngest relatives, that I checked and learned that Caroline had not even been born when the proposal is supposed to have happened!

Recently, Helena Kelly, in her book “Jane Austen: Secret Radical,” points out the same odd circumstance: this major biographical event is reported only by Caroline, and only in 1870—68 years after the supposed incident—a lifetime! (I am in general agreement with Kelly’s take on Austen and her work in society, though I find her interpretations of the novels to be “eccentric.”)

Supposedly, after the disaster with Bigg-Wither, it was brother James who escorted the Austen sisters to Bath, so Mary would have been aware of the situation. Mary, however, was never close to Jane and died herself in 1843—26 years after Jane died, 41 years after the event, and 27 years before Caroline’s telling. Caroline was only 12 when Austen died—she recounts her last sad meeting with her aunt. Even if the Bigg-Wither topic arose in the conversations after her death, that still would have been 15 years after the events. Considering the reticence people have about speaking “ill” of the dead, it is easy to believe the topic well might not have come up until much later.

How is it this story is handed down by a niece too young to have known about it directly but not by the many other nieces and nephews who were alive? Caroline’s older brother, James Edward, was Austen’s first official biographer. He was 19 when Jane died–he attended her funeral on behalf of his father–yet he sources his younger sister for the tale of the botched proposal! He would have been a toddler when the proposal occurred, but if the story was retold from time to time within the family, wouldn’t he, half a dozen years older than Caroline,  have been more likely to have heard it than she? Why would he have to reference his sister’s knowledge? 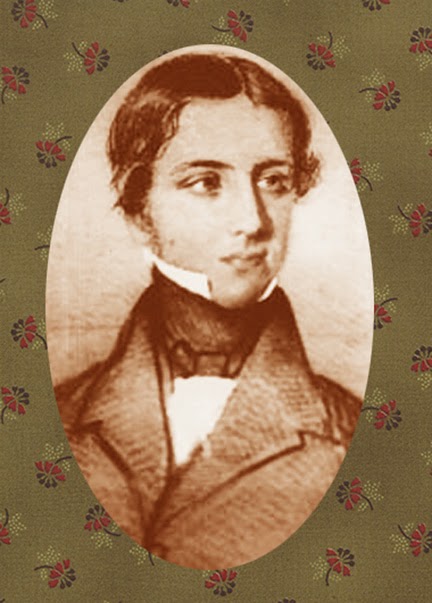 Stories have become legends in less time than the gaps in this recounting!

Further, descriptions of Bigg-Wither by Caroline do not seem to match to the one or two portraits of him—he is supposed to be a very large, heavy young man, but the visual evidence shows him as relatively slim. See the image at the top, by the headline–he does not seem to be the hulking, brooding young man of Caroline’s description.

Notice something else: Cassandra, an actual witness to the mysterious coastal suitor, who was going to propose to Jane in the summer of 1801 but died unexpectedly, as described in my last blog, provides almost no details about the man. Nor does she mention Bigg-Wither’s proposal in 1828 when she’s reminded of the other (expected) proposal.

Cass seems to have relayed just enough information about Jane’s coastal “romance” to confuse rather than enlighten. Cass also destroyed the vast majority of Jane’s letters from this period, leaving no other evidence of the events. We know nothing about the letters except that Caroline calls them “open and confidential”–but she gives no indication she has seen them. Again, most of the letters were before Caroline’s birth or when she was a baby. Why would Cass have kept the letters about Tom Lefroy, which support the idea that he (or his aunt) had dumped Jane, while burning those about those later relationships, including one in which she allegedly dumped someone else?

Though the story of any embarrassing Bigg-Wither encounter likely would have circulated for years in the “Steventonite” family (niece Fanny coined the name), the incident is too specific for one being recounted twenty, thirty, or forty years later, as likely happened. Mary provides too many details. How would she have remembered the exact date of a proposal so long before about a sister-in-law she was not close to? (Mary did not seem much fond of anyone, though in fairness she did help Cass tend to Jane during Jane’s final illness.)

Meaning the provenance of this story is suspicious, at the very least.

(The oafish Bigg-Wither married someone else in 1804 and sired ten children.)

Now that we’ve covered all the proposals, what about a possible marriage? Shocking! But the question brings us to the one letter in which Jane Austen identifies herself as a married woman, the 5 April 1809 letter to the publisher Crosby (with her fairly common misspellings, she renders it “Crosbie”) in which she demands they either publish “Susan,” which they had bought six years earlier, or she would sell it to someone else.

The publisher quickly replies that they paid for the book (though not required to publish it) and if she sold it to anyone else “we shall take proceedings to stop the sale.” End of correspondence—though years later her brother Henry did buy the book back for Jane for the original 10£, enabling it to be published as “Northanger Abbey.”

Jane signs her letter to Crosby “Mrs. Ashton Dennis,” care of the Southampton Post Office. The publisher does not know her name—Henry handled the sale, and she was identified only as “A Lady.” The thinking is that she uses a different name to remain anonymous, and the one she uses spells out “MAD” to indicate her unhappiness at the delays. (And what prompted to her write the abrupt letter six years after the fact?)

That leads to an interesting problem. Jane has been in Southampton for some time; the post office knows her. In the autumn, she kept up a steady stream of correspondence with Cassandra, then at Godmersham, when Edward’s wife, Elizabeth, died unexpectedly after childbirth. How is Jane going to pick up a letter for a “Mrs. Ashton Dennis” unless that is now her name? Isn’t it also strange that, while Jane’s life is relatively well-known, the two proposals that have very poor provenance come in the period in which Cass destroyed almost all of Jane’s letters?

Considering the confusion and inconsistency in reports of who she was involved with, and when—too many specifics in one major encounter (Bigg-Wither) and far too few in another (the mysterious clergyman described last time)—one must ask what was really going on. Were there multiple romantic encounters, each one ending disastrously, or perhaps one relationship that these inconsistent stories point to—or are designed to point away from?

When she signed her name as a married woman in 1809, was she MAD at the publisher about not publishing the book “Susan,” or MAD about some man the family later sought to hide?