Jane Austen’s “Northanger Abbey” – Who Are Catherine Morland and the Tilneys?

What do we know of Catherine Morland and the Tilneys in Austen’s “Northanger Abbey”?

Much of the description of the Abbey and of the Tilneys come to us from Austen’s heroine, Catherine Morland.

Catherine comes to Bath with dreams of highwaymen and Gothic heroes. She is a 17-year-old girl who loves reading Gothic novels. Something of a tomboy in her childhood, her looks are described by the narrator as “pleasing, and, when in good looks, pretty.” Catherine lacks experience and sees her life as if she were a heroine in a Gothic novel. She sees the best in people, and to begin with always seems ignorant of other people’s malign intentions. She is the devoted sister of James Morland, and she is good-natured and frank and often makes insightful comments on the inconsistencies and insincerities of people around her, usually to Henry Tilney, and thus is unintentionally sarcastic and funny. (He is delighted when she says, “I cannot speak well enough to be unintelligible.”) She is also seen as a humble and modest character, becoming exceedingly happy when she receives the smallest compliment. Catherine’s character grows throughout the novel, as she gradually becomes a real heroine, learning from her mistakes when she is exposed to the outside world in Bath. She sometimes makes the error of applying Gothic novels to real life situations; for example, later in the novel she begins to suspect General Tilney of having murdered his deceased wife. Catherine soon learns that Gothic novels are really just fiction and do not always correspond with reality.

General Tilney boasts of owning as “considerable a landed property as any man in the country.”
The general is a commoner, not a member of the peerage. He is a man deeply concerned with politics and national affairs. Although Austen never tells us to what political the general belongs, we know he is a party man. The general studies political pamphlets late into the evenings. Austen never expresses her party alignment in her novels, but we can assume that General Tilney represents the Whigs. Austen, herself, was the daughter of an Anglican cleric and came from a Tory family. Many believe Catherine’s marrying of Henry Tilney is an example of moral reclamation.

General Tilney expects his children and household to conform to strict standards. He despises those who do not adhere to punctuality and pre-described standards. He is overly concerned with material wealth. Early on, he caters to Catherine when he thinks she is to inherit the Allens’ wealth and downright caustic when he discovers she is not wealthy. What is ironic is the general believes John Thorpe in both cases. What does this tell us about the general? The general behaves badly, but in a manner that the real world would recognize. He is not the Gothic villain Catherine assumes him to be (He did not murder his wife.), but he is a snob and a bore. He represents the social concerns of Austen’s time. Shmoop

The scene where General Tilney and John Thorpe choose to keep company in the smoking room is characteristic of Austen’s plots. The general represents pride, avarice, vengeance, and gluttony. Henry Tilney is a prig who constantly corrects both his sister and Catherine. Thorpe is a vain scoundrel, who practices covetousness, rapacity, and materialism. How often in Austen do we see the heroine being wooed by the bounder and finding “happiness” with the prig? The Watsons, Pride and Prejudice, Mansfield Park, Persuasion, Emma, and Sense and Sensibility. 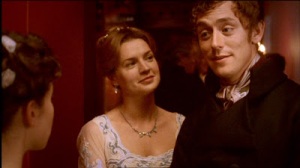 Eleanor Tilney is the perfect Gothic heroine: has the mother who passed away, possesses a strange and singular father, dwells within the abbey’s setting, and is a star-crossed lover. Yet, even so, Eleanor is a bit boring. Is this Austen making fun of the Gothic novel? Eleanor’s character is static; she does not change, where Catherine Morland is the dynamic one. Catherine learns from her hard lessons and improves. Eleanor is also the foil for the vivacious Isabella Thorpe. The more-mature Eleanor becomes the model that Catherine chooses to emulate for Eleanor is well-read, rational, and able to keep up with Henry’s wit (a skill Catherine must master if she and Henry are to know happiness). While Isabella is abandoned by Captain Tilney, Eleanor knows the reward of claiming her long-standing love, a viscount.

Captain Frederick Tilney is a seducer of women. (Ever notice how Austen has such a character in many of her novels?) Henry says of his brother (to Catherine), Frederick “is a lively, and perhaps sometimes a thoughtless young man; he [Frederick] has had about a week’s acquaintance with your friend [Isabella], and he has known her engagement almost as long as he has known her” (19.26) Frederick destroys Isabella’s engagement to James Morland, while ruining her reputation. The captain represents Society’s dual standards for behavior for men and women. He also adds to the mystique of the Tilney family: Like father, Like son. Frederick’s actions make Henry and Eleanor more sympathetic characters and his ruining of Isabelle does the same for that character, who readers sometimes see as selfish and greedy and conniving.

Henry Tilney spends a great deal of time “educating” Catherine. He teases her about her ignorance and naiveté. He instructs her in the ways of Society. He speaks to Catherine of art and literature. We never know for certain whether Henry is a bit of a chauvinist or not. He really does not seem to hold women with much regard. Henry is seen treating his sister Eleanor in the same way as he does Catherine. Henry is the voice of the narrator of the piece, but he is also a character in the story whose actions/speech satirizes everything.

“Henry displays a lot of humorous arrogance and very ironic humor towards Eleanor and Catherine, and women in general. In fact, Henry frequently provides humorous commentary on some of the book’s major themes, such as language and gender. But while Henry comments on these thematic issues, the arrogance (possibly fake, possibly genuine) with which he delivers his commentary is itself a thematic statement. In other words, Henry’s personality makes important statements about themes alongside, and sometimes independently of, Henry’s dialogue. And Henry’s dialogue is often difficult to interpret. Take this address to Eleanor and Catherine:

He laughed, and added, “Come, shall I make you understand each other, or leave you to puzzle out an explanation as you can? No – I will be noble. I will prove myself a man, no less by the generosity of my soul than the clearness of my head. I have no patience with such of my sex as disdain to let themselves sometimes down to the comprehension of yours.” (14.25) Shmoop

We know nothing about the Tilneys from Austen’s description of the house or the family’s history. In “Perusasion” we are treated to a brief history of the Elliot family, and in “Mansfield Park” Austen provides us a history of the house, but that is the extent of Austen’s “background information.”

This is Catherine’s first impression of Northanger Abbey…
As they drew near the end of their journey, her impatience for a sight of the abbey — for some time suspended by his conversation on subjects very different — returned in full force, and every bend in the road was expected with solemn awe to afford a glimpse of its massy walls of grey stone, rising amidst a grove of ancient oaks, with the last beams of the sun playing in beautiful splendour on its high Gothic windows. But so low did the building stand, that she found herself passing through the great gates of the lodge into the very grounds of Northanger, without having discerned even an antique chimney.

She knew not that she had any right to be surprised, but there was a something in this mode of approach which she certainly had not expected. To pass between lodges of a modern appearance, to find herself with such ease in the very precincts of the abbey, and driven so rapidly along a smooth, level road of fine gravel, without obstacle, alarm, or solemnity of any kind, struck her as odd and inconsistent. She was not long at leisure, however, for such considerations. A sudden scud of rain, driving full in her face, made it impossible for her to observe anything further, and fixed all her thoughts on the welfare of her new straw bonnet; and she was actually under the abbey walls, was springing, with Henry’s assistance, from the carriage, was beneath the shelter of the old porch, and had even passed on to the hall, where her friend and the general were waiting to welcome her, without feeling one awful foreboding of future misery to herself, or one moment’s suspicion of any past scenes of horror being acted within the solemn edifice. The breeze had not seemed to waft the sighs of the murdered to her; it had wafted nothing worse than a thick mizzling rain; and having given a good shake to her habit, she was ready to be shown into the common drawing–room, and capable of considering where she was.

An abbey! Yes, it was delightful to be really in an abbey! But she doubted, as she looked round the room, whether anything within her observation would have given her the consciousness. The furniture was in all the profusion and elegance of modern taste. The fireplace, where she had expected the ample width and ponderous carving of former times, was contracted to a Rumford, with slabs of plain though handsome marble, and ornaments over it of the prettiest English china. The windows, to which she looked with peculiar dependence, from having heard the general talk of his preserving them in their Gothic form with reverential care, were yet less what her fancy had portrayed. To be sure, the pointed arch was preserved — the form of them was Gothic — they might be even casements — but every pane was so large, so clear, so light! To an imagination which had hoped for the smallest divisions, and the heaviest stone–work, for painted glass, dirt, and cobwebs, the difference was very distressing.

The general, perceiving how her eye was employed, began to talk of the smallness of the room and simplicity of the furniture, where everything, being for daily use, pretended only to comfort, etc.; flattering himself, however, that there were some apartments in the Abbey not unworthy her notice — and was proceeding to mention the costly gilding of one in particular, when, taking out his watch, he stopped short to pronounce it with surprise within twenty minutes of five! This seemed the word of separation, and Catherine found herself hurried away by Miss Tilney in such a manner as convinced her that the strictest punctuality to the family hours would be expected at Northanger.

Returning through the large and lofty hall, they ascended a broad staircase of shining oak, which, after many flights and many landing–places, brought them upon a long, wide gallery. On one side it had a range of doors, and it was lighted on the other by windows which Catherine had only time to discover looked into a quadrangle, before Miss Tilney led the way into a chamber, and scarcely staying to hope she would find it comfortable, left her with an anxious entreaty that she would make as little alteration as possible in her dress.

3 Responses to Jane Austen’s “Northanger Abbey” – Who Are Catherine Morland and the Tilneys?